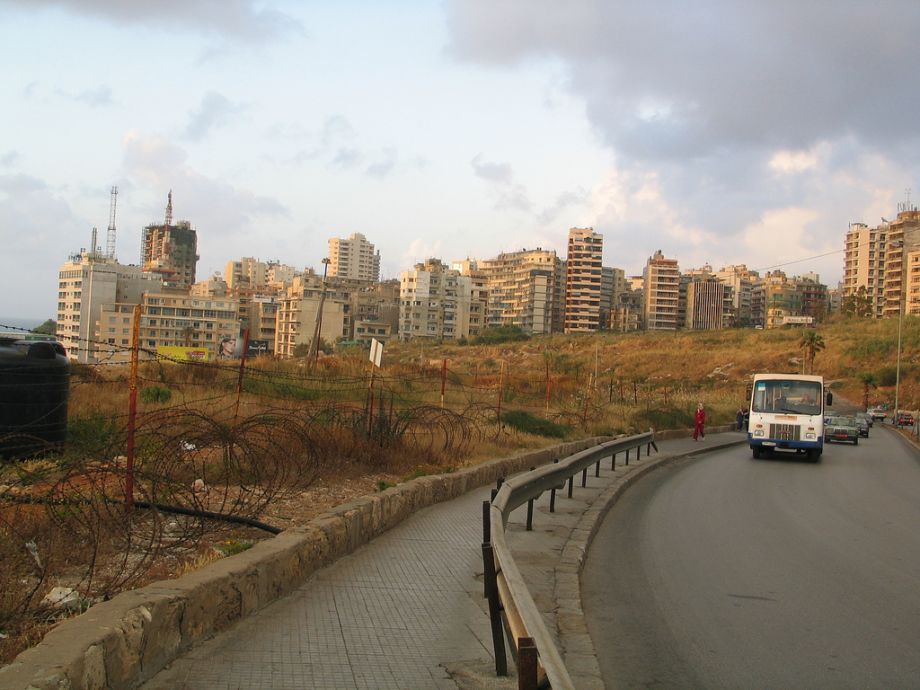 Lebanon has the most rainfall per capita in the Middle East, but Beirut still faces crippling water shortages. Photo credit: Salim Shadid via Flickr

Waterless for three weeks over December and January, 26-year-old journalist Venetia Rainey took to showering using an elaborate pulley-and-bucket system, which she self-installed in her chic, inner-city apartment in Beirut.

“We had so many water shortages that my boyfriend figured out a way to take a shower while the main tank was empty,” she says. “He found a large, cleaned-out kitty-litter plastic bottle and decided it could work if he made some holes in the lid. We used a belt to tie it up above the shower. You had to tip it slightly to get the water to start coming out, but that meant that you only used water when you actually need to wet your hair or rinse it, rather than having it flowing the entire time.”

After months of arid weather, the five solid days of rain last week, which dropped nearly half an inch of water, were welcomed as a godsend in the Lebanese capital.

“Last week we had 90 millimeters of rain, which was the heaviest rainfall all year,” says Abed Zawawi, head of predictions for meteorology at the Rafik Hariri International Airport in Beirut. “We have not been lucky this year with rain.”

That’s an understatement. Lebanon has enjoyed only 402 millimeters of rain in the last 12 months, less than half the 825 millimeters it received last year, in a country that sees an average of 714 millimeters per year.

The shortage has left Beirutis not only showerless, but also struggling financially as they fork over up to $150 for roving water sellers to top up shared apartment tanks with 2,000 liters of water at a time. Beirut residents already buy bottled drinking water and pay annual rates for tank supplies for cleaning and washing.

The dwindling groundwater supply can only be partially blamed for Beirutis’ water woes, however. Lebanon still has the most rainfall per capita in the Middle East, with over eight billion cubic meters per year. Poor resource management, a lack of regulatory framework and an aging and inefficient infrastructure means only 17 percent of available water resources are used, according to researchers. Moreover, a lack of a united political agreement in the deeply divided country has meant little to no work on water sector reform for decades.

“We do not have integrated management of water resources,” says May Jurdi, professor and chair of the environmental health sciences department at the American University of Beirut. “We have a lot of wastage on the network,” she adds, listing outdated agricultural techniques and leaking pipes in the domestic sector as just two of the many ways precious water vanishes from the system.

Lack of a united political agreement in the deeply divided country has seen little to no work on water sector reform over decades. But a new group calling itself the Civic Influence Hub (CIH) recently launched an ambitious five-year water sector reform plan. Launched in 2012, CIH hopes its pilot initiative, Blue Gold, will increase the amount of clean water available in Lebanon to 500 million cubic meters by 2020, mitigate losses, provide jobs and protect one of the country’s strategic assets. Moreover, the CIH hopes the proposal for a unique public-private partnership to implement the initiative will work as a model to address some of Lebanon’s other core infrastructure and policy shortfalls, and unite the Lebanese people in implementing projects in the national interest.

Over 40 water and infrastructure experts have consulted on the Blue Gold initiative over 18 months to develop a comprehensive water sector reform model that Sayegh says will rehabilitate water supply networks, increase supply and spur sustainable development and economic growth. Sayegh estimates the cost of the plan to be $5 billion, most of which will come from the private sector. He is confident Lebanon’s private sector will invest, but insists the plan does not amount to privatization of the water network.

“The water should still be owned by the people and the state,” he says. “The role of the private sector will be an operator.”

To ensure that’s what happens, the vision requires a complete legal and regulatory overhaul of the water sector, including anti-monopoly laws and specific public-private partnership laws, with political top cover to implement. Sayegh hopes to replace the current water authorities, run by the Ministry of Energy and Water, with a National Water Council, a Water Regulatory Authority, a National Monitoring Center and a users’ association, as well as an independent watchdog.

Paralyzed by a standoff between warring factions that saw the country without a government for 11 months until February, Lebanon does not have a history of productive sector reform. Nonetheless, Sayegh believes that as a non-sectarian and non-political lobby group, he has the right backing and that with a new government in place, CIH will manage to get the first water reform bill submitted to parliament in three months.

“It’s time to lobby. There is no time to lose. We are working in parallel with the decision-makers and should be ready to submit to the parliament a serious, comprehensive and consultative law for the national water council in three months.”

“We are convinced that we will succeed because this is a national initiative,” he says. “Failure is not an option.”

“My concern is political will,” she admits, but believes with interactions from all stakeholders and positive assessment of the model, “we can have a comprehensive, integrated water management.”