Can Bad Weather Keep a Good Mayor Down? – Next City

Can Bad Weather Keep a Good Mayor Down? 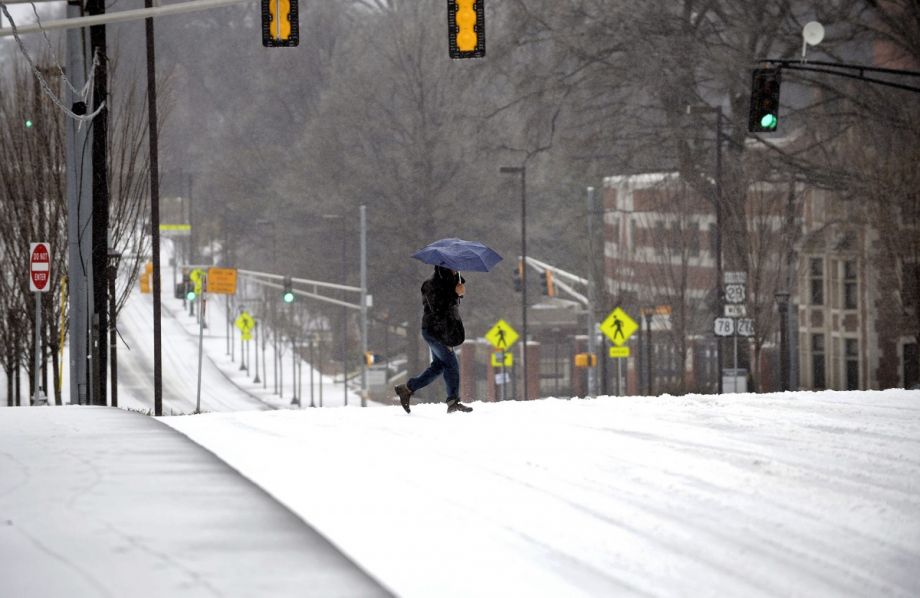 A rural farmer may talk of Mother Nature. A suburban dad will curse his local meteorologist. But in cities, when streets go unplowed and snow halts public transit, everybody yells at the mayor. Sure, the engaged city-dweller may also shake a fist at the public works or streets departments, but those guys don’t hold elected positions. As we dust off the road salt of a tough winter and step into the long days of spring, here’s a look at how mayors in five snow-struck cities weathered the season’s storms.

Snowfall this winter: 37.9 inches
Normal snowfall: 19.5 inches
Mayor: Vincent Gray
Terms in office: One
Up for reelection? Yes, in November 2014

Snow forced Mayor Vincent Gray to postpone his March 3 State of the District speech in D.C., and bad weather has forced the federal government to close four times this season. Gray threw down the gauntlet to Mother Nature last November when, on the day D.C. snow removal crews conducted their annual preparatory “dry run,” he said: “What did we learn from Snowmageddon? We learned that advance preparation is the key to success.” According to the mayor’s office, lessons learned from winters past inspired the city to test new rubber plow blades and beef up on plow-tracking technology and materials. As Washington City Paper’s Will Sommer noted, Gray, who is courting voters for reelection this year, hoped to avoid the mistakes that sent predecessors such as Adrian Fenty into snow-fail infamy. Sommer gave Gray a positive review after a major mid-February storm, but admitted that the effort didn’t fetch the mayor as much acclaim as he may have hoped for. “Effective snow removal, it turns out, is just something voters expect,” Sommer wrote.

Storm Damage Control: If senior voters turn out for Gray in November, he may need to send a fruit basket to WUSA9. In February, a reporter at the television station tweeted the mayor for help. The station had been flooded with calls from senior citizens looking for shoveling assistance only to find that D.C.’s Office of Aging, the assigned agency, was closed. The channel followed up: “After the tweet, the Office on Aging suddenly opened and began enrolling seniors in Serve DC’s snow program.”

Damage Rating: Category 2 (If Gray doesn’t get reelected, it will likely have more to do with a lingering campaign ethics controversy than snowplows.)

Unless a massive natural disaster draws attention, people tend to stick to complaining about slippery sidewalks outside their own doors. Unfortunately for Mayor Kasim Reed, the whole country stopped to stare at his region’s icy weather crisis in late January. It didn’t help that, with stranded cars littering highways and students sleeping in schools, the mayor and Georgia Gov. Nathan Deal started a very public finger-pointing game. In a blow to Reed’s oft-discussed chance of becoming Georgia’s first black governor, the New Yorker devoted nearly 1,500 words to dissecting the fallout in “How Snowfall Stopped a Rising Political Star.” Even though the article notes that Atlanta had learned lessons from a 2011 ice storm and was indeed better prepared in 2014, this speculation damningly rings out: “The extent of Reed’s responsibility for the traffic disaster turned out to be more complex than most people initially assumed, but even with storm-dimmed vision one could see that the snow didn’t just bring Atlanta’s highways to a stop — it may have put the brakes on Reed’s political ascent.”

Storm Damage Control: Days after the January storm, Reed promised to form a “working group — which would include assistance from The Weather Channel — to develop best practices for future severe weather responses.” In February, when “Pax” threatened the South, Reed got his second chance and seems to have made good. He and Deal appeared at a press conference together with the mayor saying, “I think it’s important that the state and the city speak with one voice.” By the time the storm abated, Reed was joking about Valentine’s Day not getting canceled, and settling into comfortably humble mode. “I think the credit belongs to the people of the city of Atlanta and the people of the region,” he said.

Damage Rating: Category 4 (The New Yorker’s forecast might end up being hype, but Reed really slipped when he tweeted “Atlanta, we are ready for the snow” just hours before gridlock struck.

Snowfall this winter: 57.4 inches
Normal snowfall: 22.3 inches
Mayor: Bill de Blasio
Terms in office: One
Up for reelection? Yes, in 2017

The upside of being new to the mayor’s office in January 2014: You could probably blow a big storm, and voters could in four years. The downside? While you’re trying to build momentum around ideas such as universal pre-kindergarten, everyone else is bracing for the worst. So what’s a guy to do with “Hercules” hitting New York City three days into his administration? Well, Mayor Bill de Blasio, perhaps looking to burnish his man-of-the-people rep, decided to shovel the sidewalk outside his Brooklyn home. Later, he sent his teenage son to shovel some more. Two weeks later, he was shoveling again — this time while defending the city’s snow response. According to Politicker, “Mr. de Blasio said he was satisfied with the city’s response to the storm — even as some of his future neighbors on the Upper East Side reportedly raged against unplowed streets.” But de Blasio’s biggest headache this season came when the city kept schools open on a snowy February 13, drawing the ire of parents and Al Roker. The nation’s weather cop tweeted a barrage of disbelief over the decision. De Blasio responded: “I respect Al Roker a lot. I’ve watched him on TV for many, many years. It’s a different thing to run a city than to give the weather on TV. So I am comfortable with our decision-making.”

Storm Damage Control: A poll released last week revealed that even though the mayor’s current job approval rate stands at only 39 percent, “a majority of New Yorkers are happy with the way the de Blasio administration responded to a streak of snowstorms that pounded the city throughout his first several weeks.” Maybe the fact that de Blasio and Roker eventually got together and made up on Today helped.

Snowfall this winter: 56.4 inches
Normal snowfall: 35.8 inches
Mayor: Marty Walsh
Terms in office: One
Up for reelection? Yes, in 2017

Marty Walsh’s first days as mayor were also snowy ones, but he definitely got a jump on the season when, three days before being sworn in, he filled the city’s snow czar post. During a late January storm, Walsh praised the efforts of city workers but was already brainstorming improvements such as sending out automated alerts in more languages. “There’s not really a good, strong infrastructure in communicating [inclement weather situations] with city employees, so we’re going to work to fix that,” Walsh told MassLive. (Proving the Cory Bookerification of mayoral snow politics stretches beyond the New York-Newark metro area, Walsh too shoveled snow at his own home.) Walsh earned immeasurable bonus points from citizens when the city didn’t declare a snow emergency, which would have put parking bans into effect, during a mid-February hit. According to a spokesperson, “the city was worried that residents traveling for school vacation week would return home to find that their cars had been towed and stored for days.”

Storm Damage Control: Given that Walsh seems unflappable when it comes to storms so far — and that snow saved him from having to wear a Broncos jersey over a lost bet — anyone following Boston’s ongoing St. Patrick’s Day parade negotiations may wonder if Walsh is secretly hoping for one last snow smackdown right around March 16.

Snowfall this winter: 73.5 inches
Normal snowfall: 30.6 inches
Mayor: Rahm Emanuel
Terms in office: One
Up for reelection? Yes, in 2015

This wasn’t Rahm Emanuel’s first mayoral winter, but it has been the snowiest. While de Blasio was shoveling his Brooklyn sidewalk at the beginning of January, Emanuel was on a family vacation in Indonesia. The day he returned, the Chicago Tribune’s John Byrne observed that “with many side streets still unplowed, temperatures at historic lows and schools closed, the sight of Emanuel at the microphone after returning from a trip to a warm country on the other side of the world could become fodder for critics who contend he’s out of touch with regular Chicagoans.” By mid-February, the city had spent $4.5 million more on snow removal than Emanuel had budgeted for the entire season. When a supply barge delivering salt got stuck in the icy Mississippi River, the city had to pay private contractors to fetch salt from other sources. “The snow removal budget deficit could not come at a more inopportune time for Chicago and Emanuel, who will stand for re-election in just one year,” wrote Sun-Times City Hall reporter Fran Spielman.

Storm Damage Control: Maybe Emanuel wanted to prove, Indonesian vacation aside, that he’s Chicago tough with a recent dip into chilly Lake Michigan for the annual “polar plunge.” He also joked about snow last week, explaining to a visiting L.A. Mayor Eric Garcetti that snow is simply “water” and “we’ll sell it to you at a big price.”

Damage Rating: Category 3 (Emanuel could be swept into category 4 if that snow-removal budget issue gets thornier, but he does have another shot at a winter before his name is on the ballot again.)

Snowfall totals are for the 2013-14 winter, according to the National Weather Service, as of March 5, 2013. “Normal snow” is determined by the NWS based on the last 10 years.