Can a Park Prevent Gentrification? – Next City 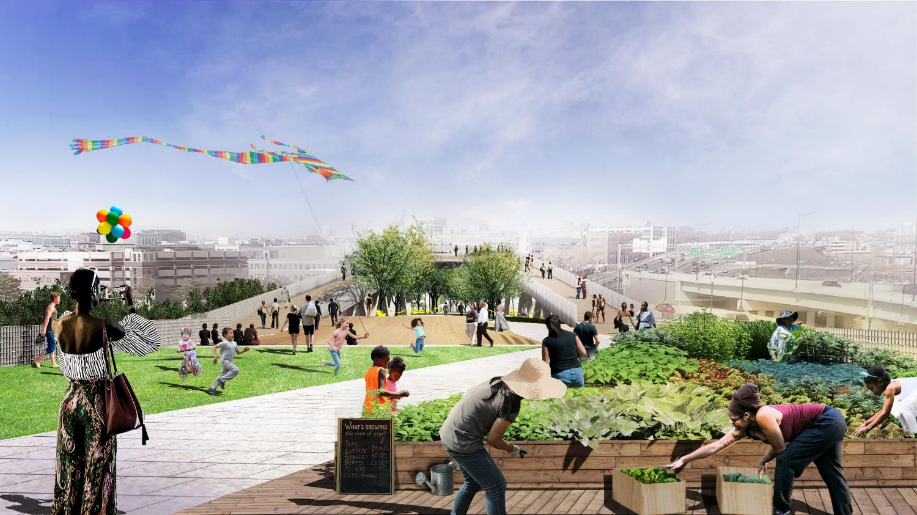 (Building Bridges Across the River, OMA+OLIN)

The upheavals of the past year – the pandemic, recession, protests over racial injustice and a violent insurrection at the Capitol — have laid bare the great fissures in American society. Today we are a nation deeply divided by income, race, and class. Amid calls for healing and justice, President Biden promises to “build back better,” with development that promotes racial and economic equity.

But what does that mean, exactly?

One answer comes from a soon-to-be-built park in Washington, D.C. Constructed on an abandoned bridge across the Anacostia River, the 11th Street Bridge Park will link upscale Capitol Hill with Anacostia – a historically African-American, predominantly low-income neighborhood east of the river. When it is completed in 2023, the park will offer playgrounds, gardens, performance spaces, an environmental education center, public art and a boat launch.

And Building Bridges across the River , the nonprofit behind the bridge plan, is channeling the resources raised for the park to promote truly equitable development, especially in long-neglected Anacostia and its surrounding neighborhoods. The strategies used by Building Bridges and its partners – engaging the community, building trust, backstopping existing residents and businesses – offer a model for the Biden administration and others working to rebuild from the wreckage of the last year.

East of the river, plans for the park were initially met with skepticism. Brenda Richardson, a longtime Anacostia activist who formerly served as Councilman Marion Barry’s deputy chief of staff, recalls the first time she heard about the park, in 2013. Harriet Tregoning, then D.C.’s director of planning, and Scott Kratz, a then-volunteer who now directs the Bridge Park, had come to Anacostia with a plan to raise $30 million for the park.

The reaction was underwhelming. Richardson remembers local leaders saying, “Do you know what Ward 8 could do with $30 million? We need education, housing, employment – and you want to build a bridge park?” But Richardson remembers something else from that day: Scott Kratz saying, “I’m willing to listen.”

Kratz made good on that promise. “He visited people in their homes; he went to civic association meetings; he went to wherever the people were,” says Richardson. And he got an earful.

Some residents were wary of outsiders coming in to “help,” and delivering nothing. Vaughn Perry, now Building Bridges Across the River’s equitable development manager, remembers thinking that “This mythical bridge park, this is never going to happen. We’ve seen so many promises made to our community that have been broken.”

Others braced for a gentrifying juggernaut. “There was great fear around building the park,” says Richardson. “It symbolized, ‘the white people are coming and we’re going to get displaced.’”

Indeed, similar developments – notably the High Line in New York City – have sparked waves of gentrification and displacement. In fact, the link between urban parks and displacement is so strong that it has spawned a backlash against lavish green spaces. The “just green enough” movement calls for smaller parks with fewer amenities as a hedge against gentrification.

“Under-resourced neighborhoods need investment,” says Kratz, “but the community needs to be at the table from the very beginning with a careful eye to intended and unintended consequences. Our goal is to ensure that the thousands of residents who helped shape the park can be the ones who actually benefit from it.”

The challenge for Building Bridges Across the River was to create a first-class park that serves existing residents and preserves the neighborhoods they call home. To that end, the organization is working to protect affordable housing, create local jobs, and strengthen the bonds of culture that hold neighborhoods together. To date, these efforts have plowed over $60 million into the community, nearly matching the capital costs of building the Bridge Park.

At the heart of this effort is an equitable development plan, which is shepherded by Perry, who has lived east of the river for decades. The plan took shape after year-long intensive engagement with residents, which was essential to overcome skepticism and cultivate trust. “Building trust takes time,” says Perry. “You’re talking about generations of distrust, and you’re not going to do away with it overnight. It’s really been about us continuing to show up, continuing to listen, and continuing to be at meetings and events, even if we are not on the agenda. It’s really important for us to be a part of the community.”

Equally important: making sure the community can see tangible outcomes from their engagement. “We’ve seen a hundred plans. We’ve given our feedback and our input and have not been able to see things come out of it,” Perry says. “So it was really important for us to have some early wins, to say, ‘This is what we did with the feedback you gave us.’”

Those early wins are impressive. Notably, Building Bridges Across the River helped launch the Douglass Community Land Trust, which maintains over 200 units of housing that will remain affordable in perpetuity. Named after the 19th-century abolitionist (and Anacostia resident) Frederick Douglass, the Trust keeps housing prices down by separating the value of the building from the land beneath it.

The Trust buys and holds title to the land, lowering costs for the building owner. In the case of apartment buildings, those savings keep rents down. In return, the building owner agrees to a limit on profits from eventually selling the property. That covenant allows owners to reap some equity from their investment while keeping the property affordable for current and future occupants.

Here, too, the community drives the agenda. Two thirds of the Trust’s board are community residents, small business owners and other stakeholders. “As a nonprofit member organization, [the Trust] really depends on our membership and the community to drive, inform and guide decisions,” says Sheldon Clark, who serves as a community representative and board chair for the Trust.

Clark says the Trust plans to scale up its efforts, to keep pace with rapidly growing need. “We’re looking to partner with developers that have projects on the books that they’re looking to execute,” he says, “so we can step in and make them more affordable.”

The Trust is just one strategy Building Bridges Across the River employs to tackle D.C.’s affordable housing crisis. Another focuses on renters, who comprise the majority of Anacostia’s residents. The nonprofit organized a tenants’ association that holds “know your rights” workshops and mediates between landlords and tenants.

At the same time, Building Bridges Across the River worked with another nonprofit, MANNA, to start a home-buyers’ club that helps prospective buyers navigate the complexity of purchasing a home. The club “gives people the tools they need so they can move from generations of renting to being a homeowner in the community where they grew up,” says Perry. To date, 87 Ward 8 renters have become homeowners because of this program.

Inevitably, the bridge park will bring new visitors and resources to the neighborhoods east of the river. Building Bridges Across the River and its partners are working to position existing residents and businesses to benefit from that influx of investment — and avoid getting pushed out. “The train is coming towards us,” says Kristina Noell, executive director of the Anacostia Business Improvement District . “We don’t want to stop it, but we do want to switch the tracks.”

Anacostia’s small businesses—like Mahogany Books, Nubian Hueman, and the Open Crumb restaurant—“are the lifeblood of this community,” Noell says. “We need to make sure they survive, and remain sustainable, so they can create wealth for themselves and their families.”

In partnership with Building Bridges, Noell’s group is giving local businesses the support they need to thrive. For example, they hired a firm to provide pro bono assistance with back-office functions like taxes and accounting. “It was so impactful, because many of these businesses couldn’t afford to pay a CPA $150 an hour,” says Noell. Another effort helps businesses up their e-commerce game—essential to survival during the pandemic.

Building Bridges Across the River and the Anacostia Business Improvement District also help local businesses apply for loans and grants. “So many of the small businesses actually didn’t think they would ever get these grants because they never did before,” Noell says, “They felt like, ‘we never get anything, so I’m not even going to apply.’” So, Noell went into “mama mode,” urging reluctant businesses owners to seek help. The resulting loans and grants have been a lifeline through the pandemic and recession.

And Building Bridges has partnered with Skyland Workforce Center to launch training programs in construction, so local residents will be first in line for new jobs created by the park. Even before the park is built, “We are reaching out to developers and contractors in the area, and letting them know that we have a database of qualified and skilled people who come from the community,” says Perry. “We’re not just looking at a job; we’re looking at a career path for the residents.”

There’s more – much more. In the midst of Anacostia’s vast food desert – the communities east of the river have one supermarket for 80,000 residents — Building Bridges Across the River helped build seven community gardens and launched a community-supported agriculture network that provides fresh produce to hundreds of low-income residents each year. And as the pandemic and recession gathered momentum last year, the nonprofit and its partners pivoted to emergency mode — coordinating efforts to provide food and $2 million in direct cash assistance to families in need.

Building Bridges Across the River’s strategies are diverse – almost scattershot, it might seem. But there are themes that unite them. Each strategy is driven by needs and priorities articulated by the community. And each represents an effort to repair the deep, persistent inequities that separate communities on either side of the Anacostia River.

On the eve of his inauguration, President Biden said, “To heal, we must remember.” This is also true: For the healing to start, the hurting must stop. As the 11th Street Bridge Park shows, to “build back better” we must first bridge the racial and economic disparities that have long divided our cities, and our nation.

Laurie Mazur is the editor of the Island Press Urban Resilience Project, which is supported by The Kresge Foundation and The JPB Foundation.