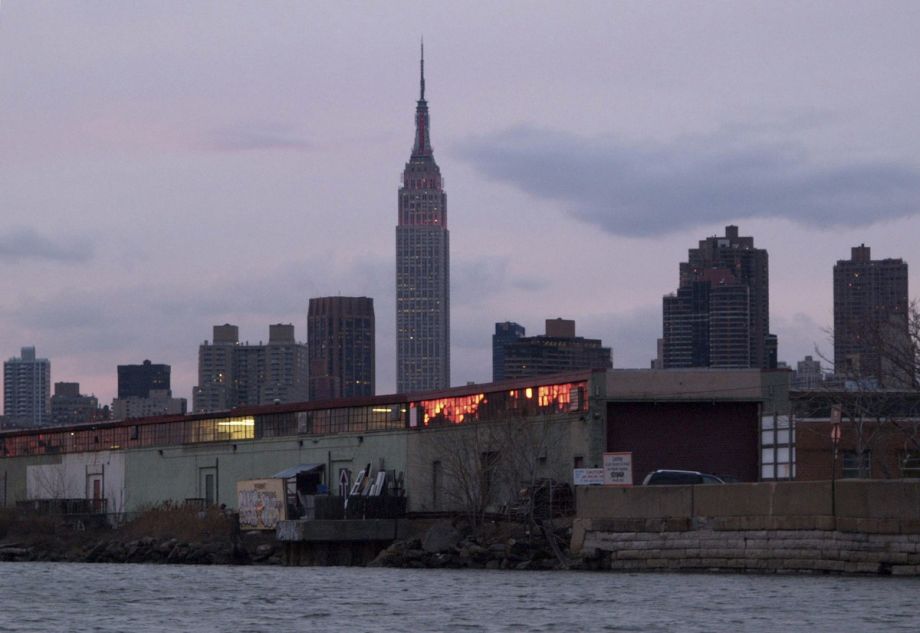 Greenpoint residents fought to get a nature trail along Newtown Creek (above). The N.Y. estuary was designated a Superfund site in 2010. (AP Photo/Rick Maiman)

From green roofs in Chicago to the High Line in Manhattan, U.S. cities have been making high-profile investments in green space — to widespread celebration. But could there be a downside to urban greening? A growing body of academic literature examines a paradox: Low-income communities tend to suffer from various kinds of environmental injustice, including shortage of green space. But when these concerns are addressed — the power plant closes, a park opens — the neighborhood becomes more desirable, often kickstarting a process of so-called “environmental gentrification.”

How, then, can we reduce environmental inequities without displacing the very people the improvements are supposed to benefit? One answer: a “just green enough” model that seeks to remedy injustices without introducing the fancy amenities that can radically transform a neighborhood.

A new paper in the journal Landscape and Urban Planning, by UC Berkeley professor Jennifer Wolch and coauthors, is the latest to advocate this approach. The paper, a literature review, discusses past work on environmental gentrification. In addition to the High Line, which raised property values in what had been a relatively affordable area of Manhattan, the authors cite a study of a stalled proposal to expand park space in Harlem in 2010. The city proposed connecting two pocket parks into a larger green space, but at a community meeting, residents expressed suspicion. Why now, only after luxury condos had been erected nearby? What would closing off the streets mean for traffic in the neighborhood? What would happen to the homeless people who currently spent time in the small parks? Whom, in short, would the project really benefit?

Similar questions dog almost any plan to “green” disadvantaged neighborhoods. But the authors do invoke one success story: community activism in Greenpoint, Brooklyn, a historically Polish neighborhood on the waterfront, home to heavy industry. A huge underground oil plume plagued Greenpoint for decades, and its polluted estuary, Newtown Creek, was declared a Superfund site in 2010.

In 2012, Winifred Curran, a professor at DePaul University, first coined the term “just green enough” to describe her findings from a case study of Greenpoint. Curran and her coauthors found that life-long residents and newcomers were working together, largely through an organization called the Newtown Creek Alliance, to achieve a cleaner, greener neighborhood while preserving an industrial presence and avoiding the “parks, cafes, and a riverwalk” paradigm. They helped win a $25 million settlement from Exxon Mobil, as well as the declaration of the Superfund site and the establishment of the Newtown Creek Nature Walk. This nature trail, in the shadow of a sewage treatment plant, was dubbed “ironic” by the New York Times, but it has proved popular with locals.

Bill Schuck, a longtime Greenpoint resident and member of the Newtown Creek Alliance, told me that in addition to cleaning up the neighborhood and expanding access to the water, the group focused on preserving working-class jobs, conscious of the risks of gentrification. He and his fellow activists thought, “Hey, wait a second. Are we doing this to make this attractive to real estate developers? And it was, “No, we’re looking to benefit people like us.” Though Greenpoint has not entirely escaped gentrification, it remains, according to one city official Curran interviewed, “the last real industrial beltway of the city,” with thousands of jobs in transportation, warehousing, and wholesale.

Curran believes that some planners and policymakers have become sensitive to these issues. But, she wrote in an email, “there is a tremendous reliance on the strength of community activists; activists really seem to lead the way, declaring desired outcomes that planners can then try to work with. I think it comes down to what the vision for the city is — a business-oriented place in competition with other global cities for limited investment dollars or a neighborhood-oriented place driven to improve outcomes for all its residents.”

What steps might other communities take to improve environmental resources while forestalling environmental gentrification? Wolch’s paper concludes with some recommendations for attempting to pull off this “careful balancing act.” Planners must be willing to design projects determined by specific community needs and preferences — for example, one Toronto non-profit urged planners to move away from re-wilding in favor of urban agriculture spaces that the community would find readily useful. Another suggestion is to prioritize small and scattered parks and community gardens, which can distribute access throughout a neighborhood, rather than flashy, large-scale projects of the type that tend to attract attention and real estate speculation. Also essential will be other tools, not specifically ecological but relevant to gentrification more broadly, such as affordable housing provisions and rent stabilization measures.

Environmental gentrification embodies essentially the same challenges as all gentrification. It’s painfully logical, almost tautological: When a place becomes more attractive, it tends to become more expensive. How do you improve conditions without raising rents?