Look to California for Greener Urban Growth – Next City 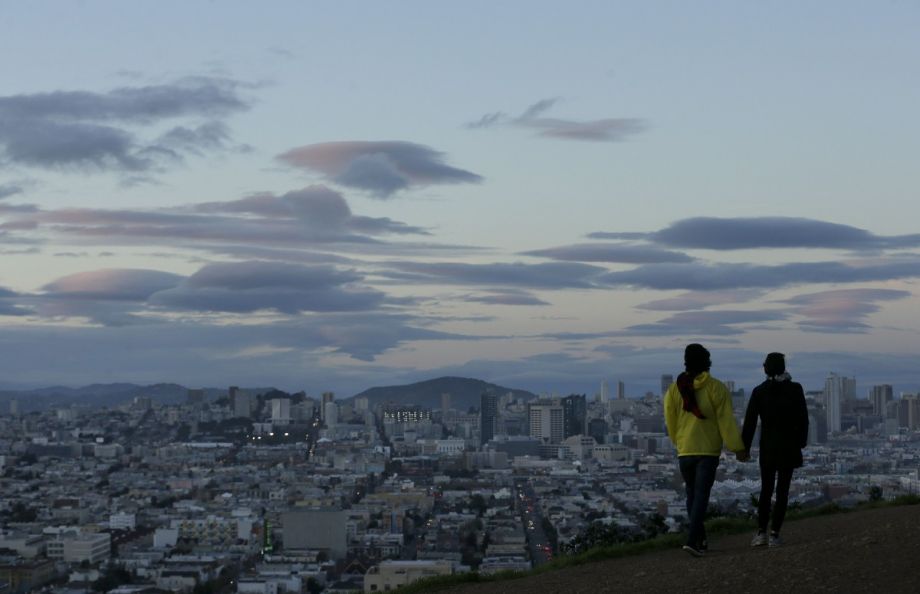 A man and woman look out at the skyline from Bernal Heights Hill in San Francisco. (AP Photo/Jeff Chiu)

California’s suburban sprawl has made the state’s transportation sector its largest single contributor to greenhouse gas emissions. With an expected addition of 6 million new residents in the next 15 years, whether California succeeds in building cities inward instead of outward could make all the difference in meeting its 2030 climate target, which calls for reducing greenhouse gas emissions 40 percent below 1990 levels by 2030.

The state is doing some innovative work to finance sustainable urbanization, and smart growth itself will help with the financing challenge. By limiting the expansion of the “footprint” for urban infrastructure, even as the state absorbs newcomers, smart growth could create $18.5 billion in savings on local infrastructure costs.

Despite the estimated infrastructure cost savings, smart growth will require serious investments in new transportation options coupled with incentives for sustainable infill development. Surveying a few of the state’s greatest financing efforts to date shows the progress already being made and illuminates areas for further efforts, particularly on financing affordable housing in line with sustainable design.

Los Angeles Leads the Way
In Los Angeles, a 30-year half-cent sales tax increase passed in 2008 will raise $40 billion to fund transit projects over 30 years, doubling Los Angeles’ transit network. In order to accelerate development, however, former Mayor Antonio Villaraigosa proposed augmenting the local revenue stream with federal loans, which led to the creation of a national program, “America Fast Forward,” with the help of Senator Barbara Boxer. Through this program, municipalities can receive low-interest Transportation Infrastructure Finance and Innovation Act (TIFIA) federal loans as long as they have already provided at least 49 percent of project funds. This program stands as a unique marriage between local and national government efforts.

America Fast Forward is doing its eponymous duty, already helping to speed along Los Angeles’ transition to a cleaner transportation network. The map above shows the 12 projects that will be built over the program’s lifespan, with an emphasis on building as much within the first 10 years as possible. The extension of the Orange Line has been completed, and the remaining 11 projects are underway; over a hundred more are in the planning phases. All in all, the program will save 191 million vehicle miles traveled (VMT) annually once all projects have been completed — a significant and speedy step forward in the state’s efforts to reduce transportation emissions.

While innovative cities like Los Angeles are introducing new ways of financing metropolitan-scale sustainable development, California as a whole has unleashed a series of new projects using cap-and-trade revenue from the Greenhouse Gas Reduction Fund (GGRF). The GGRF reinvests the proceeds from the state’s cap-and-trade program, which auctions permits to industry to emit greenhouse gases from their operations. Since 2012, these auctions have been generating a growing amount of revenue, which will be distributed to these programs. Governor Jerry Brown’s draft fiscal 2016-2017 budget proposes spending $3.1 billion in cap-and-trade revenues, including $700 million left over from last year and $2.4 billion that is expected to be generated from auctions this coming fiscal year.

More than one-third of the state’s cap-and-trade revenue spending has gone toward transportation and sustainable communities projects. The passing of Senate Bill 535 in 2012 required 25 percent of GGRF annual spending to go toward supporting disadvantaged communities. Investments in improving the quality of transportation and housing directly benefit the climate, while also serving low-income communities. According to a new climate benefits map tool created by TransForm, 15 transportation and sustainable communities projects are underway in Los Angeles alone, receiving a total of $75,269,581 in funding. These projects are mostly new housing developments and transit upgrades. The combined title of this category is reflected in the projects where most housing developments are directly linked to public transit. Rolland Curtis Gardens exemplifies this integration as a mixed-use, transit-oriented development project consisting of 140 units of affordable housing — it will receive $4,000,000 in GGRF grant money. The largest project in Los Angeles thus far, the redevelopment of the Willowbrook/Rosa Parks Station, received a $38,494,000 grant to improve interconnectivity and service in a station that largely serves disadvantaged communities.

Next Steps in Innovative Urban Finance
Despite Los Angeles’ — and California’s — success in using revenue from carbon pricing to help fund the clean energy transition, more work lies ahead for the state to meet its ambitious greenhouse gas reduction goals. It has been estimated that the state has a $59 billion deficit in deferred maintenance on transportation infrastructure. The state’s cities must also rapidly speed up the building of housing to reduce housing price pressures.

Energy Innovation is developing a policy concept that could improve the efficiency of GGRF spending: loan guarantees for developers. Loan guarantees, like GGRF grants, would be given to developers who agreed to develop mixed-use affordable housing. This would help to counteract pervasive rules that currently stymie mixed-use development. Loan guarantees could also be used to stimulate investment in transit-oriented development (TOD), which provides great climate benefits, especially when serving low-income communities. A recent study from the Center for Neighborhood Technology showed that lower-income households drive nearly 50 percent fewer miles when living within a quarter-mile of frequent transit than those living farther away. Despite a highly publicized failure of a solar industry manufacturer that had received a loan guarantee along with large amounts of private equity, according to a 2015 report by the U.S. Department of Energy, the financing approach has been a successful and cost-effective driver of energy innovation.

A recent award-winning paper by Karen Chapple, a professor at University of California, Berkeley, argues that tax reform could also be a tool for improving climate incentives for development. One of Chapple’s proposals for reform is to increase the amount of property tax revenue returned to the municipalities based on their performance in building infill and transit-oriented development. On top of this reform, she suggests that California’s cap-and-trade revenues could be matched to the municipality’s share of property tax revenue so the funds could be given as a steady stream rather than on a project-by-project basis. Both of these reforms could help encourage cities to better align development with the state’s climate goals.

California and its cities are starting to tack toward a cleaner future. Although past patterns pose a challenge, Los Angeles is showing California and cities around the world that inertia can be overcome. This year’s updating of regional VMT goals under SB 375 as part of a larger effort to extend the state’s climate polices through 2030 (the Scoping Plan process)should provide more policy impetus. Yet without necessary financing, the new urban patterns that are needed to create a green 2030 will fail to emerge. The state’s $1.8 trillion economy can surely find the money. The question is whether policy will set the framework needed to channel these investments toward clean and cost-effective urban development.

Chris Busch is the director of research at Energy Innovation, where he leads the Urban Sustainability Program.

Lili Pike is a fellow at Energy Innovation, whose mission is to accelerate progress in clean energy by supporting the policies that most effectively reduce greenhouse gas emissions. The organization works closely with other experts, NGOs, the media and the private sector.