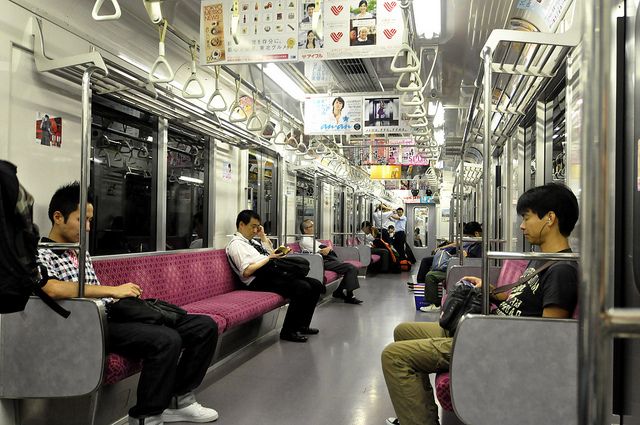 Once I got over my jealousy — why didn’t I have the idea, and the resources, and the ability to travel around the world, ride different transit systems and write about it all? — I found Straphanger to be the best kind of summer reading: Easy to digest without being complete fluff. And there was the added bonus of making me feel, just a little bit, as if I were visiting Copenhagen, Moscow or Tokyo myself.

A quick recap: In Straphanger: Saving Our Cities and Ourselves From the Automobile, Montreal-based Taras Grescoe — who doesn’t own a car and identifies as a “straphanger,” or someone who relies on public transit to get around — recounts his time spent exploring over a dozen cities around the world. Part travelogue and part assessment of the social aspects of transit in a wide variety of cities, Straphanger has Grescoe rhapsodizing about such things as the grand stations of Moscow’s subway and the lulling, sleep-inducing quality of Tokyo’s trains.

I was most fond of Grescoe’s account of Copenhagen. I rolled my eyes at the outset, what with the fawning over a city that seems to commander nearly every conversation about citizen cycling, but I was struck by Grescoe’s unadulterated excitement in being there. I was particularly struck by his comments on Danish happiness and its connection to transit (“Yet you don’t hear many Danes boasting about their well-being. It’s as though, after discovering the formula for a felicitous and fulfilling urban life, Copenhageneres decided to just get out and enjoy it,” pg. 156). For me, more than any other segment in the book, that was the strongest argument why cities should retrofit or plan for a future of public transit. Which chapter did you enjoy the most?

I read Straphanger from the perspective of, well, a straphanger (actually, I’m predominately a cyclist; I use public transit in D.C. once in a blue moon). Grescoe’s unbridled enthusiasm for non-car transit infrastructure around the world felt familiar to me — my past few vacations have actually been planned around riding regional rail systems, and in two weeks I’ll be touring northern Poland by bike — but I wonder how convincing it would be to someone that isn’t already an avowed rider. The book seemed to me thesis-less, or thesis-lite: Sure, public transit is great, and Straphanger gives great examples why that’s so. But more than anything, the book is a travel diary of sorts. Its argument is in the experience of reading it, not in its explicit terms.

Were any of you not completely sold on the benefits of public transit (a long shot in this forum, I know) and convinced by Grescoe’s descriptions of various systems, or at the least do you feel more excited about riding public transit than you did before reading Straphanger? In my introductory post for this month’s pick, I said that Straphanger, based on its cover and description, reminded me of David Owen’s Green Metropolis, a book arguing that New York City is so efficient because it’s dense and well-connected by public transit. I maintain that connotation, especially based on Grescoe’s first chapter about New York. Public transit is a popular topic, especially as gas prices in the U.S. rise. Did Straphanger recall any other publications for you?

Grescoe’s chapter on bus rapid transit seemed particularly timely, given the recent volleying that’s gone about bus riders and class: Over at The Atlantic Cities, Amanda Hess argues that transit agencies need to reach an upper echelon of riders, but Jarrett Walker counters that bus service just needs to get better to incentivize people out of their cars. (A fellow Next American City contributor also weighed in, reaching a conclusion similar to Walker’s.)

Though the chapter on Copenhagen emphasized bike infrastructure over rail, I felt that it was a natural segue in the book. The inclusion of an assessment on bus rapid transit seemed necessary, but shoehorned in, as if Grescoe was making a concession to buses and wrote about Bogotá as an afterthought. How do you feel about bus rapid transit — especially in North America, given that it may soon start appearing in more and more U.S. cities?

How about the consistent undercurrent of Usonia? Did you find Grescoe’s emphasis on Frank Lloyd Wright’s dream community as a foil to transit in the rest of the world a good one, or was it just tired? Wright’s vision may have been simultaneously deadly and exemplary of a far-out American dream, but at least Usonia didn’t actually get built.

Lastly, if you could ride any transit system in the world, what would you pick? Is there a city you wished he had visited? Grescoe’s account of the Moscow and Tokyo subways had me excited about both, and I would, of course, have liked to hear his thoughts on Washington, D.C.’s Metro, Metrobus and bike lanes — especially the latter. I wonder if he would think them sophisticated by U.S. standards, or if he’d be more critical, echoing his disbelief in, say, Los Angeles’ ability to become a transit-based city.

Later today, I’ll post my August book club pick. In the meantime, discuss Straphanger below or on Twitter. I’m @alexbaca, and Taras Grescoe — who’s graciously agreed to take any questions you might throw at him — is @grescoe. I’m looking forward to your insights.