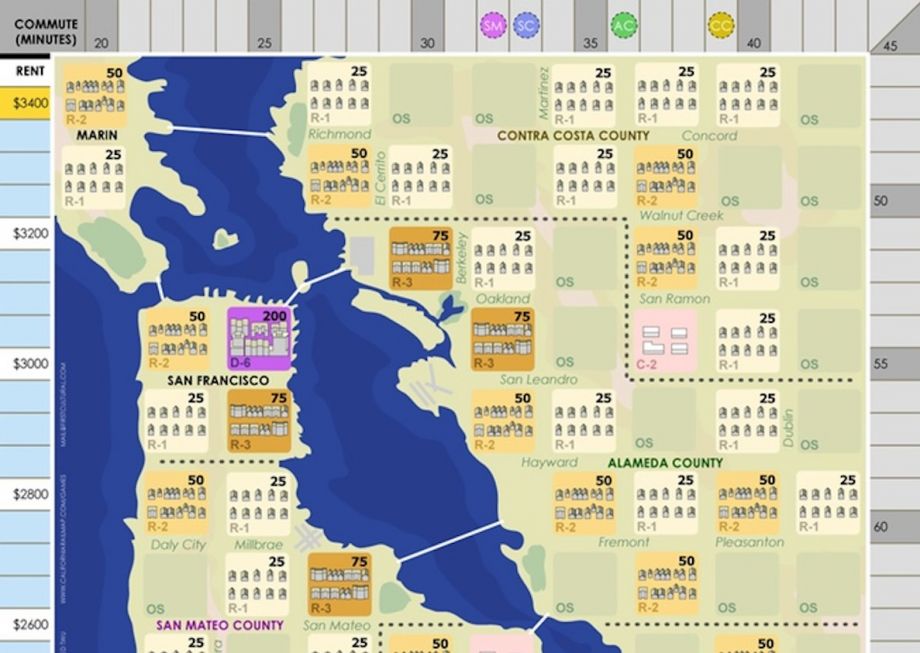 Two to 12 people can play the Bay Area Regional Planner board game.

For those San Francisco apartment-dwellers growing more rent-burdened by the minute, the Bay Area’s housing market doesn’t feel very playful. But a new board game aims to take the many variables contributing to the lack of affordable housing in the region and offer players the chance to work through a policymaking puzzle.

Berkeley designer and artist Alfred Twu’s “Bay Area Regional Planner” game is on Kickstarter, where its description explains, “With far more people wanting to live here than there are homes, rents have risen to record heights. However, building new housing isn’t easy, with concerns about traffic, views, gentrification, and open space, just to name a few. Still, the problem can be solved, though not by San Francisco alone. You’ll have to plan and build regionally.”

Players are given different policy goals that must be achieved in each round of the game. All the players must agree on where to start building.

“Policy goals are based on actual feedback to regional plans at … public outreach workshops, and the consensus-based decision making is an abstraction of how the public process here works,” notes the Kickstarter page.

There are 12 rounds, each representative of two years, and the game comes equipped with economic draw cards that could signal a recession, an economic boom, a bubble or the standard economy. After each round, rent and commute times — numbers that are supposed to be true to reality — must be adjusted.

The game is designed for two to 12 players, and the housing crisis is designed to be solved in two hours or less. You can get one copy of the game for $40 plus shipping.

According to Curbed SF, has designed two other games, California Water Crisis and US High Speed Rail Game.