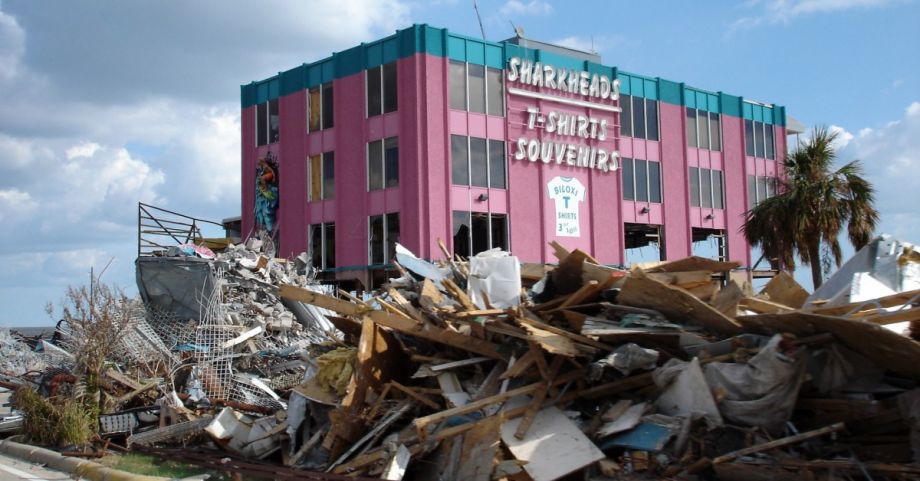 The one-two punch of tropical storms Marco and Laura along the U.S. Gulf coast eerily echoes Hurricane Katrina’s arrival 15 years ago, on August 29, 2005. Katrina, which caused some US$170 billion in damages, remains the most costly storm in U.S. history.

Much attention in 2005 focused on the devastating flooding that Katrina wreaked in New Orleans. But other hard-hit towns also have stories to tell. I’ve spent 15 years researching the storm’s effects in Mississippi, centering on the city of Biloxi, home to about 46,000 people.

Biloxi’s history, culture and economy are tied to the Gulf, driven by seafood and tourism. Its nickname is “the playground of the South,” an allusion to local beaches and its long history of illegal gambling.

Today the gaming is legal: Eight of Mississippi’s casinos are located in Biloxi. Those casinos employ over 7,200 people and generate close to $20 million annually for the city.

In my forthcoming book, “Mississippi After Katrina: Disaster Recovery and Reconstruction on the Gulf Coast,” I explore Biloxi’s story and what it can tell other U.S. communities about long-term disaster recovery.

Katrina also ravaged a wide area beyond New Orleans. Towns along the Mississippi Gulf Coast faced the storm’s strongest side. In Biloxi, Katrina killed 53 people and destroyed nearly 20% of the town.

Thousands of residents sheltered locally, and many were left in temporary housing afterward. Over 65,000 jobs were lost. Casino closures cost Biloxi millions of dollars in revenues. Biloxi’s population dropped by 8% after Katrina, a loss it never recovered.

Biloxi and other communities weren’t out of the woods after Katrina. Other disasters followed – most notably, the 2008-2009 recession and the 2010 Deepwater Horizon oil spill.

These events prolonged Katrina’s economic pain. In 2010-2011 I met Biloxians who were still working to rebuild storm-damaged homes. Many lots sat empty, either for sale or awaiting construction.

That work is still ongoing. It took six years to complete planning and secure federal funding for the Restore Biloxi Project, a $355 million effort to replace water, sewer and drainage systems damaged during Katrina. In 2019 the city sued the Federal Emergency Management Agency for refusing to pay some costs for the project, now scheduled for completion in 2024.

Local road repairs and paving continue in the hardest hit neighborhoods. This isn’t unusual in heavily damaged areas as attention and funding priorities change over time. But waning attention and support are critical obstacles to rebuilding neighborhoods.

Long-term disaster recovery is never just about one event. It is a complex lived experience of simultaneously coping with recovery, new disasters and daily life.

This is especially true along the Gulf Coast, which is frequently struck by hurricanes and tropical storms. Many Biloxians I spoke with described how experiences with previous hurricanes – notably, Camille in 1969 – influenced their Katrina decision-making. One refrain I heard was “I didn’t evacuate for Katrina because I was okay in Camille.” In this case, past experience was a poor guide.

Some residents supported rebuilding casinos quickly after Katrina because they remembered Mississippi’s legalization of casinos in 1990 as a key point in long-term recovery from Camille. But this perception shifted with time. Critics, such as members of Coastal Women for Change, a local advocacy group, began to question why government officials prioritized casinos over nearby homes.

Before Katrina, Mississippi had required casinos to be located offshore on barges as a way of confining gambling. After the storm, the state legislature amended the law, allowing casinos to be rebuilt on land within 800 feet of the waterfront. This decision gave casinos and other developers access to land that had been formerly housed some of Biloxi’s most racially, ethnically and financially diverse neighborhoods.

When communities receive disaster aid, the focus is often on large institutions like the Federal Emergency Management Agency and the Red Cross. But I found in my research that Biloxians had much more positive views of efforts by individuals, local organizations and small groups.

People told me about co-workers who sheltered them during extended waits for FEMA trailers. Local groups like the Biloxi chapter of the NAACP and Coastal Women for Change helped people obtain supplies, child care and computer literacy training to apply for disaster aid. Small groups of volunteers from across the U.S. cleaned up debris.

Local efforts do not guarantee rapid recovery, but they are critical to people’s personal and shared recoveries and well-being. Local aid is typically on the ground first after disasters. Organizations rooted in the community may stay longer than national groups, and can shift to meet other needs. For example, Coastal Women for Change has shifted from Katrina recovery to preparedness, advocacy and recovery from other disasters.

What can we learn?

What does Biloxi’s experience indicate for other communities ravaged by disasters, whether they are hurricanes, wildfires or floods? In my view, it shows that recovery is a long-term process that requires ongoing support, and is shaped by local history and culture.

Viewing recovery this way raises important questions. Who gets to make rebuilding decisions? Where does funding go? Are local needs being met?

State and national officials make critical decisions about funding and laws related to recovery, like allowing casinos to rebuild on land in Biloxi. National and international NGOs can bring in much needed financial aid and expertise. But when those officials and organizations fail to incorporate local needs and voices, local residents may remain frustrated and see their recovery delayed by outside decision-making, other funding priorities and competing disasters.

Every storm that hits the Gulf Coast is unique in some way, but some things about the recovery process are constant. As I see it, recovery starts at the local level. Involving a broad and diverse set of local residents in the process and paying attention to the community’s history are essential to ensure a full recovery.

Jennifer Trivedi is assistant professor of anthropology and core faculty member for the Disaster Research Center at the University of Delaware.