Signs of Our Times: Sharing the Streets – Next City

Signs of Our Times: Sharing the Streets 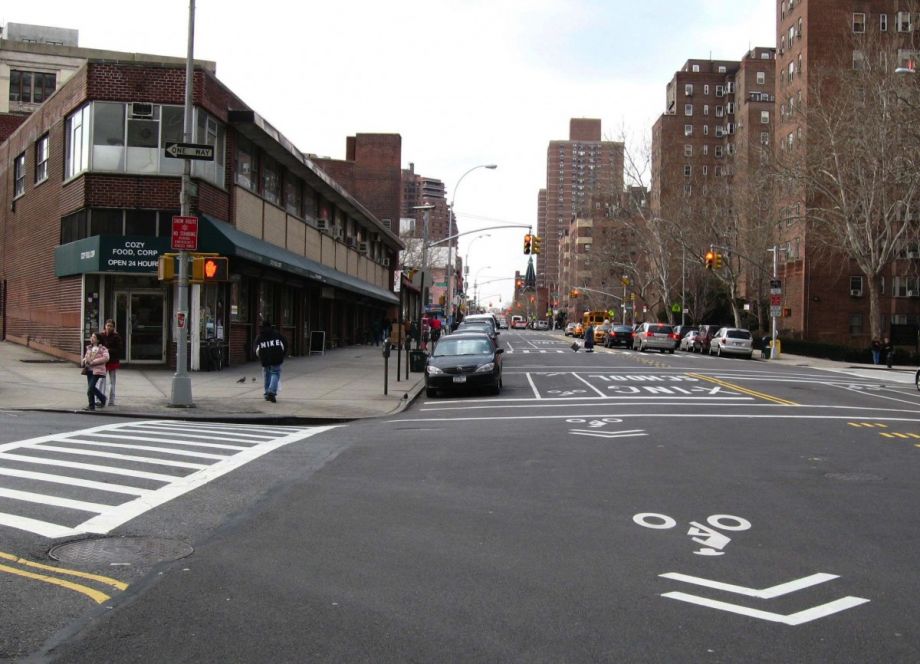 A sharrow symbol on a New York City street signals that cars and bicycles share the road.

Pop quiz: What do those ubiquitous yellow “Share the Road” signs, with a drawing of a bicycle, actually mean?

According to the U.S. Department of Transportation’s “Manual on Uniform Traffic Control Devices,” the plaques are intended to “warn drivers to watch for other slower forms of transportation traveling along the highway, such as bicycles.”

But state DOTs across the country often place these signs on narrow roads in an attempt to convey a much more specific message: Bicyclists have a legal right to the roadway and may use the whole lane if necessary, without moving right to allow motor vehicles to pass.

“A lot of people don’t know that bikes are considered vehicles, and they have almost all of the same rights on the road as motor vehicles do,” says George Hess, a North Carolina State University researcher. “That’s the problem with the ‘Share the Road’ signs. It doesn’t really explain what your behavior is supposed to be.”

Hess co-authored a recent study comparing three types of signage intended to convey that cyclists may take the lane and do not need to move right to allow vehicles to pass without changing lanes: “Share the Road” and “Bicyclists May Use Full Lane” signs, and shared lane markings, or “sharrows” (far right sign below).

Hess and co-author M. Nils Peterson asked participants in an online survey to evaluate the legality and safety of traffic situations involving a motorist and a cyclist on a narrow road with oncoming traffic in the adjacent lane.

They found that participants who saw a “Bicycles May Use Full Lane” sign were more likely than those who saw no sign to agree that the motorist should pass the cyclist in the adjacent lane, that the cyclist does not need to move right to allow the motorist to pass, and that it is safe for the cyclist to ride in the center of the lane.

Sharrows produced a somewhat mixed result, with significant increases in comprehension but not as great as from “Bicycles May Use Full Lane” signs. Participants who saw the scenario paired with a traditional “Share the Road” sign showed no significant different in response from those who saw no sign at all.

“It’s not that ‘Share the Road’ is bad, it’s just completely useless,” says James Wilson, executive director of Bike Delaware. In 2013, Delaware’s DOT announced it would stop installing “Share the Road” signs and phase out existing signs, thanks in large part to Bike Delaware’s advocacy. On their website, the group referred to the signs’ “unresolvable ambiguity.”

“Cyclists regard [the sign] as an unequivocal statement that bikes belong in the roadway,” says Wilson. “But motorists have interpreted it literally 180 degrees opposite. [To motorists] ‘share the road’ means don’t get in my lane and slow me down.”

The NC State study, published last month in PLOS ONE, found that novice bicyclists and those who commute by car experienced the greatest increase in understanding thanks to “Bicycles May Use Full Lane” signage. Hess says that may be because cyclists learn road rules through experience, advocacy organizations and peer groups, whereas drivers and less frequent cyclists may be less aware of traffic laws for bikes and have fewer opportunities to be educated about them.

Survey participants were recruited through Twitter, where the survey achieved its greatest traction among cyclists. The 1,978 respondents are thus not a representative sample of the U.S. population, says Hess. Eighty percent of respondents said they cycle at least 16 km per week, an outlier to be sure among the general population.

“People who cycle care about [this issue] more because when there is a conflict, they often come out on the losing end,” says Hess. He says the survey sent a strong signal despite the skewed participation, since infrequent cyclists and drivers saw the most educational benefit from “Bicycles May Use Full Lane” signage.

The next step for Hess and Peterson is to test out signs in a more complex environment, first in a simulation and then on the road, where signs will vie for attention among moving vehicles, foliage and a host of other distractions. The online survey was a very clean study, says Hess, but out on city streets, people don’t experience signage divorced of context this way.

For Hess, who primarily researches environmental conservation, bicycling is an environmental good: good for traffic congestion, climate change, health and budgets. “But a lot of people are afraid to drive on the roads,” he says. “I think one way to decrease that fear is to make it clear how traffic rules relate to bicycles. Improving signage can help.”

James Wilson of Bike Delaware says he’s glad the data has backed up his state’s decision to remove “Share the Road” signs, but that in the grand scheme of road design, signs are not as powerful as the public may believe.

“We’re glad ‘Share the Road’ is gone in Delaware,” he says. “But people shouldn’t get all excited about it one way or the other. In the larger context of making places more bicycle friendly, signs are one of the less important issues. … Infrastructure is far more important.”