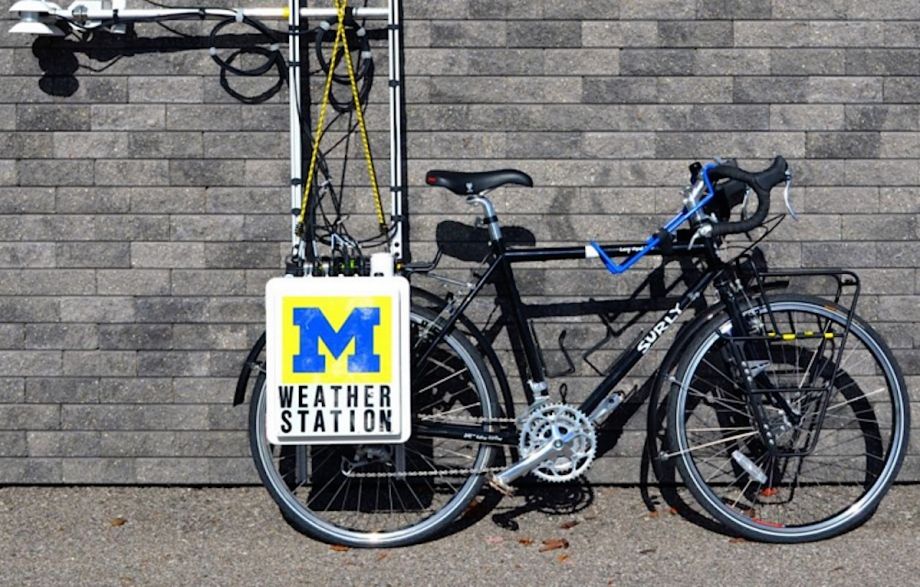 Rajkovich cycled the roving weather station around the city in the summer of 2012, gathering location-specific data about differences in the heat island effect between rural and urban areas. Now his findings are informing the city’s resilience planning.

“If you could start to correlate having trees with increased temperatures, or certain types of pavement with increased temperatures, you can start to write policies about what you want to do in the city to reduce the urban heat island effect,” says Rajkovich. “Most of the time when you take these measurements they are done at the airports or they’re done from satellites taking pictures from the ground. … [The bicycle weather station] gets at the microclimates we experience on a day-to-day basis but that maybe aren’t as well studied.”

Rajkovich’s 25-pound bike is mounted with about 50 pounds of equipment, including instruments to record air temperature, ground surface temperature, bike speed, humidity and solar radiation, plus a GPS device mounted to a 6-and-a-half-foot tower on the back and a fisheye lens camera on the handlebars, pointed straight up, creating a record of tree canopy and other cover. Readings were logged to an onboard hard drive.

Often, says Rajkovich, measurements of temperature differences along the rural-to-urban transect are taken from cars, which can interfere with the data.

“You’re sitting in traffic, you’re potentially getting some of the waste heat from the exhaust of the cars in front of you,” says Rajkovich. “If you’re on a bike you can actually kind of get away from that and also get to other locations that you might not be able to get to within a city.”

Rajkovich made 12 trips in the summer of 2012, which ranged from 10 to 50 miles each, taken during the hottest part of the day. For his initial rides, Rajkovich stuck to the cycling paths. He wanted to be sure he had full control of the vehicle before taking it to the streets.

His findings were highly consistent with other studies of the heat island effect: Tree cover and water contribute to reduced temperatures. From the data Rajkovich also hypothesized that waste heat from highways and industrial sites might contribute heavily to the effect, and he wants to explore that further.

“We also kind of validated this as a method,” he says. “Bicycle is certainly a lower-cost way to get into doing this kind of project.”

Rising summer temperatures put Cleveland’s residents at risk, particularly elderly and low-income people, and those with preexisting medical conditions like obesity or diabetes. Cuyahoga County, where Cleveland is located, has some of the highest levels of heat-related illness and mortality in the country.

“In cities in the north there’s a definite spike in deaths as you get above about 75 degrees,” says Rajkovich. “As you go up to extreme temperature days, like the 90s, 95, for a place like Cleveland, [the mortality rate] can go up 15 or 20 percent of what it is on kind of a baseline day.”

Cleveland’s vulnerability is a product of its population’s relative poverty and age, and the age of the city’s homes, many of which lack air conditioning. It’s also one reason Rajkovich decided to conduct his research here. “I’m also from Cleveland, so it’s personal for me,” he says.

Now that he understands the bike’s maneuverability, Rajkovich is looking to take weather cycles to Cleveland’s neighborhoods. The original tricked-out weather station bike cost $16,000 to build. Rajkovich thinks he could equip simpler bikes, perhaps with just temperature and humidity gauges, for around $150.

He’s talking to bike manufacturers about borrowing more cycles to do so. Cleveland recently received a grant from the Kresge Foundation to engage in climate planning in four neighborhoods — Glenville, Slavic Village, Central-Kinsman and Detroit Shoreway — in part by appointing community climate ambassadors. These residents received training, some by Rajkovich, in basic climate science and adaptation strategies in order to help identify possible mitigation projects and to share their knowledge with neighbors.

If Rajkovich can secure those extra bikes, he’s considering giving some to the climate ambassadors. “They could ride them around and take measurements, but also talk to their neighbors about what is happening with climate change in Cleveland, and then potentially park them in their backyard and gather longer-term information for us.”

His data is also informing the city’s tree planting plan. Cleveland is nicknamed the “Forest City,” but many of its trees have been depleted by the emerald ash borer (a beetle that feeds on ash trees). The microclimate data can help the city figure out where to plant in places not only experiencing increased temperatures, but also affected by other challenges like poverty and lack of mobility.

When he first proposed this project, he says, Cleveland officials were “amused.”

“Until you have the results, it’s hard to explain to folks exactly what is going on in this type of experiment. So people were very supportive, but at the same time I think people were like, this guy might be slightly crazy.”

Now that it’s proving to be a successful method, Rajkovich says he’s “curious to see if this is going to spawn all sorts of strange weather contraptions riding around cities. It would be awesome actually, I would really like to see that.”