Best Reads: Census and the City – Next City

Best Reads: Census and the City 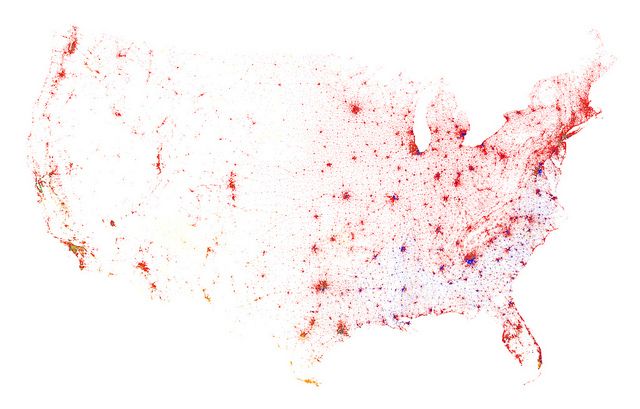 Census 2010 results. One dot for each 500 residents. Red is White, Blue is Black, Green is Asian, Orange is Hispanic, Yellow is Other. Flickr user Eric Fischer

Vanishing City: The Story Behind Detroit’s Shocking Population Decline “The news this week that Detroit’s population plunged more than 25% to just 714,000 in the last decade shouldn’t be surprising. The city’s collapse is as well-documented as it is astonishing – the population peaked at nearly 2 million in the 1950s, driven in part by a post-World War II auto industry boom now long gone.” Time

Many U.S. Blacks Moving to South, Reversing Trend “The percentage of the nation’s black population living in the South has hit its highest point in half a century, according to census data released Thursday, as younger and more educated black residents move out of declining cities in the Northeast and Midwest in search of better opportunities.” The New York Times

Among peer cities, Philadelphia’s growth is above average “It’s more fabulous census news for Philadelphia, as government figures for similar cities show that the City of Brotherly Love is completely, definitely, um, well, slightly above average.” The Philadephia Inquirer

Whites still fleeing cities in Mass. “Whites are abandoning Massachusetts cities at a rapid clip, continuing well-worn paths to the suburbs or out of state, according to new demographic data from the US census.” The Boston Globe

@ Brookings Podcast: The Census and Changing Demographics in U.S. Schools “Fewer than half of the nation’s 3-year olds are Caucasian, supporting the premise that the America of tomorrow will be comprised of a minority majority. Preparation for the challenges and opportunities of the nation’s new look needs to begin now, says William Frey.” The Brookings Institution

Rhode Island’s population growth is the lowest in the U.S. “Government policymakers in Rhode Island, and New England as a whole, have to address the economic implications of a population that’s growing slowly at the same time it’s becoming more racially diverse, say researchers analyzing new data from the U.S Census Bureau.” The Providence Journal

2010 Census: Hispanic Population More Than Doubles in Nine States “The nation’s Hispanic population rose to 50.5 million in the 2010 Census, and increased by 43% over the decade. A new analysis of 2010 Census data by the Pew Hispanic Center, a project of the Pew Research Center, indicates that in nine states, the size of the Hispanic population more than doubled. They included the Southeastern states of Alabama, Arkansas, Kentucky, Mississippi, North Carolina, Tennessee and South Carolina, as well as Maryland and South Dakota.” Pew Research Center