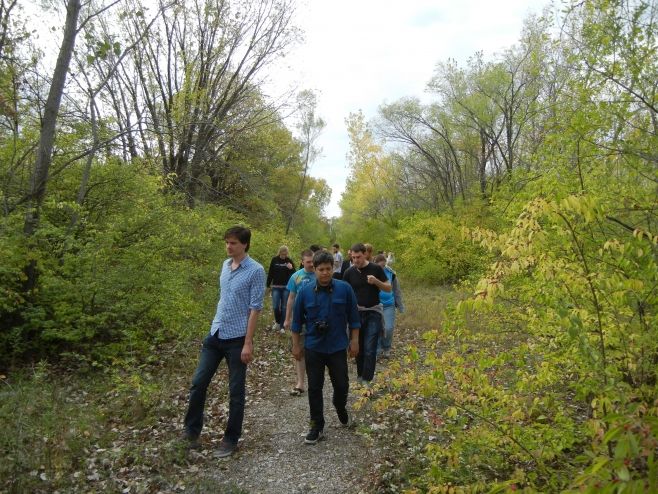 A tour of the Pruitt Igoe site.

“Every vacant lot holds cathedrals of potential,” writes John R. Stilgoe in Outside Lies Magic, his paean to exploring the ordinary world around us. If that statement is true, then the site of the Pruitt-Igoe housing projects is the seat of a giant and growing archdiocese. Just blocks from local treasures such as Crown Candy Kitchen and the City Museum, these 33 acres of wilderness hide in plain sight. A closer look reveals them to be a symbol of many things at once: America’s lost attempt to define housing as a public good, a campaign to systematically destroy the DeSoto-Carr neighborhood, the demise of the Modernist project.

In the past few weeks, as part of my role as co-manager of the Pruitt-Igoe Now design competition, I have been taking groups of people through and around this site. These groups consist of people intent on entering the competition, people curious about the conditions and several student studios that are producing entries. There have been student groups from West Virginia University’s undergraduate landscape architecture program, the University of Illinois-Chicago’s graduate architecture program and the Illinois Institute of Technology’s undergraduate architecture program. Other visitors have come from Chicago, Tulsa, Salt Lake City, Atlanta and New York City. Every week, a new request comes in.

I am overjoyed that so many people actually want to experience the site before attempting to conceptualize its future, either through physical design or political process. This intimacy establishes a framework of understanding that, while not total, is deeply rooted in the actual potential of the site and its position in the city of St. Louis. To experience the site is to get baptized in the benign inertia of St. Louis at the start of the 21st century. Those wild acres are so intrinsically like St. Louis that most locals avoid them at all costs. Through avoidance, Pruitt-Igoe’s forest has become the secret heart of the city. While the Gateway Arch beats the pulse of a proud city, Pruitt-Igoe murmurs its shame.

Last Friday, I guided the IIT students and their insightful leader, Visiting professor Terry Surjan. The students met with Juan William Chavez at his Lemp Brewery studio, had lunch at the Stable and then formed a caravan of vehicles en route to the site. We drove west on Utah Street, past the red brick vernacular streetscapes of Benton Park and up Jefferson, though a landscape marked by both traces of early twentieth century walking city life and the confusion of postwar urban renewal. This journey peeled back the layers of urban density from the massive brick masses in the brewery complex – St. Louis at its peak of industrial vitality – to the decimated commercial corridor of Jefferson north of downtown – St. Louis in a state of freefall that may or may not be over.

Reaching Pruitt-Igoe, we gathered on a vacant lot across the street from the menacing tree line at Pruitt-Igoe. The students clearly had not encountered such a puzzling urban landscape, but were gathering experiences that would inform their efforts to place the chaotic and decadent landscape into the logic of planned renewal. These young aspiring architects from the Midwest’s largest city faced St. Louis’ secret heart with a directness that most St. Louisans will never do.

The verdant and budding spring landscape here is lovely, as traces of green pop off of infinitesimal branches. Soft flowers emerge, scenting the site with promise. By early summer, honeysuckle is abundant on the outer fence lines, forming a concertina wire of white blossoms. Wildflowers reach their peak life, and Queen Anne’s lace is in lavish display. The fragility of that plant is a contrast to the gnarled branches of the invasive and slow-growth tree species that grow through piles of rubble. As the sun gives us longer days, the site’s prairie-like open expanses grow tall with native plants.

By the end of summer, only goldenrod – that harbinger of allergy to many – is blooming, and the wildflowers crisp into jagged stalks beaten down by tour groups. The trees are fully leafed, and shelter the views off of the obvious paths of the site. Leaving the established trails, all of which are atop existing paving, seems unwise even though I have never found evidence of long-term residence at Pruitt-Igoe. This pastoral land, with many secret spots, and before the projects a neighborhood nearly overcrowded with people living in any space they could use, has evaded encampment.

As autumn sets in, Pruitt-Igoe’s trees shed their leaves to expose the scarred landscape left behind. Now the historic attributes come into better view, and by November are fully evident. The north end of the site is marked by piles of debris trucked in during excavation of the convention center expansion in 1991 and 1992, creating mounds of dirt marked by tantalizing bits of brick and concrete. These are not artifacts of our recent past, however, but come from buildings that were considered aged by the time that Yamasaki’s towers were rising.

The south end of the site, however, retains a more obvious grade. One of the 200-foot lawns between rows of towers is still flat, and marked by a lone remaining streetlight. This lawn is starting to thicken with sumac and hackberry, but is still largely open prairie. Here is the site’s only skyline view. Framed by a young forest instead of a crashing mid-century high-rise, the Gateway Arch looks more like the abandoned totem of a long-lost civilization than a monument built by a declining American city.

Years ago, I went on a walk through the site that ended with a picnic lunch. Students tend to leap across the rubble piles, and smaller groups get off the main paths. This spirit of play is not surprising, given how far the site lies from the next forest. People like a good walk in the woods, and here are woods in the center of a great city.

Yet the play contrasts with the politics of redemption. The Pruitt-Igoe site is St. Louis’ most important historic site from the recent past, because it is where thousands of human lives were brought into direct contact with architectural modernism. That these were lives of poor people seems to provide cover for a carelessness about the site as a remainder of a cultural legacy largely misunderstood. Yet nowhere is there any monument to the people who lived the urban renewal of St. Louis. Instead, the modernism of suburban and commercial architecture is getting preservation attention (deserved, yes).

Pruitt-Igoe’s acres have been a perpetual monument to the experience of life in the “vertical ghetto,” but the nature of the monument changes daily as the forest grows. There is a beauty in that malleability. Alongside those changes has been stasis in the political economy of the city: a continued population decline, continued demolition of housing stock on the near north side, land speculation, persistence of poverty in north St. Louis, constant downtown development and lingering unemployment.

Yet the Pruitt-Igoe site is still a development prize, despite the fact that the underlying conditions that led to both the failure of the DeSoto-Carr neighborhood and the conjoined housing projects have not been fundamentally changed. Then there is abandonment of land; the 33 acres of Pruitt-Igoe pale in comparison to the 8,000 scattered vacant parcels owned by St. Louis’ Land Reutilization Authority. What should the priority be in a city without massive demand for redevelopment? What about neighborhoods where people are living now that need stabilization? The Pruitt-Igoe site is intertwined with large questions, whose answers St. Louis’ political leadership are slow to deduce. The delay offers time to remember that the site is not an island, and – as it was nearly sixty years ago – any unitary program won’t save the rest of the city. The ecology of the accidental forest shows us how interdependency creates great, unexpected urban moments. As the leaves drop from each tree, the full forest comes into clear view.