How a Barn-Raising Spirit Sustains Community Assets in Baltimore 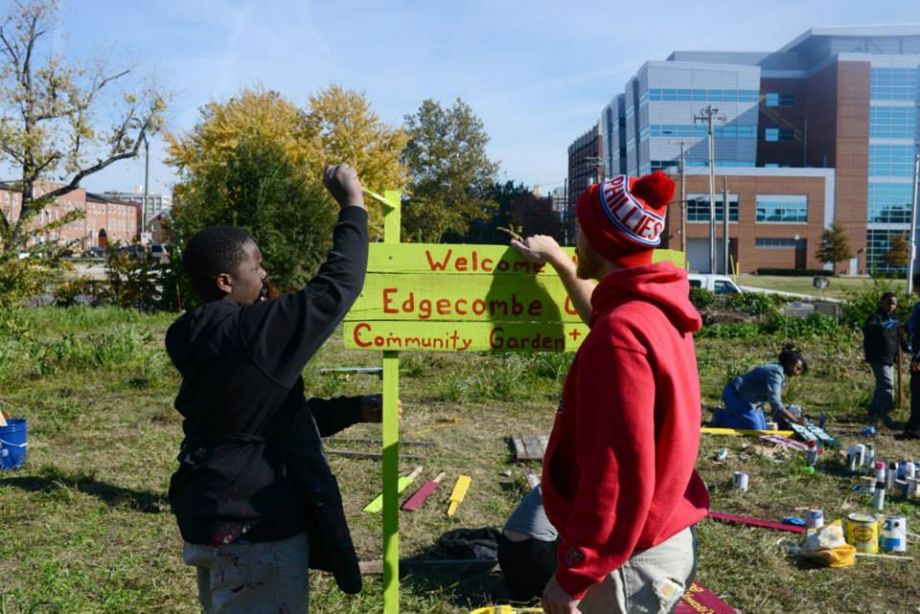 The Duncan Street Community Garden in East Baltimore was teeming with food and flowers on a glorious summer day. I was feeling good — but maybe not quite as good as the garden’s volunteer manager, Lewis Sharpe, a retired steelworker originally from rural Virginia. The man clearly just loves the place. When Sharpe started 25 years ago, the one-acre, city-owned site was a run-down haven for criminal activity. Today, its allotments are a prized city asset.

“Charm City” was the last stop of my research fellowship trip — I also visited Minneapolis-St. Paul and Detroit — to examine how cities can raise money and use volunteers to sustain community and civic assets that have traditionally relied on city resources (parks, gardens, rec centers, libraries, senior centers, museums, art galleries and theaters).

I wanted to find quick fixes to help sustain these assets in the face of public spending cuts and determine how, even if public money was plentiful, such assets should best be sustained. The fruits of my labor take the (highly inedible) form of a recently published free (downloadable) toolkit.

The toolkit, “The New Barn-Raising,” shows how, like the barn-raising of frontier America, sustaining modern assets is a highly communal affair involving residents, local government, non-profits, businesses and unions. My research revealed that this partnership model encourages innovation and increases a city’s involvement in — and ownership of — assets.

In the longer-term, this is actually also how assets can best be run: with voters (assuming they want assets) left to decide just exactly what balance they want between provision by government and these other partners.

Despite offering this “big picture” framework, my toolkit is ultimately very practical and highlights the following: how friends groups can fundraise; what taxes local governments can use; how corporate social responsibility staff in large companies should think about supporting assets; and how asset managers can best use volunteers.

In Baltimore, the Duncan Street garden is in the vanguard of a movement that has seen local residents, community groups, churches and businesses adopt more than 1,000 city-owned vacant lots across the city. On average, four adjoining lots are adopted for activities such as growing, and more often, cook-outs, pocket parks and movies. These are some of the lessons from Baltimore that informed the key messages in my toolkit.

1. Volunteers supplement but can’t supplant city staff.
With most assets, trained city staff typically do the bulk of the work that lay volunteers then supplement. With lot adoptions, this is taken to its extreme as just a small city staff coordinates a much larger number of volunteers. Unlike the running of mainstream parks and gardens, smaller community spaces don’t require someone with special expertise or the use of heavy or hazardous equipment to manage and clean. Even soil tests can be found online for under $20.

2. City governments that want volunteer help need to reorganize.
Baltimore already had agreements whereby, so long as the adopter kept the lot(s) clean, they would not be prosecuted for “guerilla gardening” or similar uses. Yet volunteer stewardship needed to be made more attractive still. In 2011, Mayor Stephanie Rawlings-Blake introduced the Power in Dirt plan to tackle vacant lots — central here was ensuring that city staff provided good online maps of available vacant lots and access to cheap city water.

3. Find funding to fill key positions.
Baltimore’s Power in Dirt project was part of a larger volunteer recruitment initiative called stepUP, which is headed by a chief services officer. The CSO post was initially supported by the national foundation-funded Cities of Service program but, owing to its success, has subsequently been mainstreamed by the Mayor. The support staff come through the federally funded Volunteers in Service to America (VISTA) program — a work-volunteering hybrid.

4. Partner with local non-profits.
Baltimore Green Space (BGS) helps Power in Dirt vet prospective adoptees of vacant city lots but also ensures that adopters get adequate city support. BGS, as a land trust, can also own (and get insurance for) land on behalf of groups looking to acquire their plots from the city. Duncan Street and four others have done this. Also, some lot adopters have, since mid-2012, borrowed necessary equipment from the local branch of ToolBank USA.

5. NGOs have their limits.
The fact that non-government organizations do so much does not mean that they can simply just pick up the slack for further public cuts. To do so would require additional giving by individuals, businesses and others as well as increased foundation endowments.

I hope the toolkit spawns metro-wide assets fora and national and international best practice exchange. For my part, I have just set up a non-profit, The New Barn Raising, to encourage those. In the meantime, you or someone you know can hopefully use it.

Gareth Potts was a 2012-3 German Marshall Fund Urban and Regional Policy Fellow and is establishing the non-profit New Barn-Raising in Detroit. Find him on twitter at @garethpotts1.