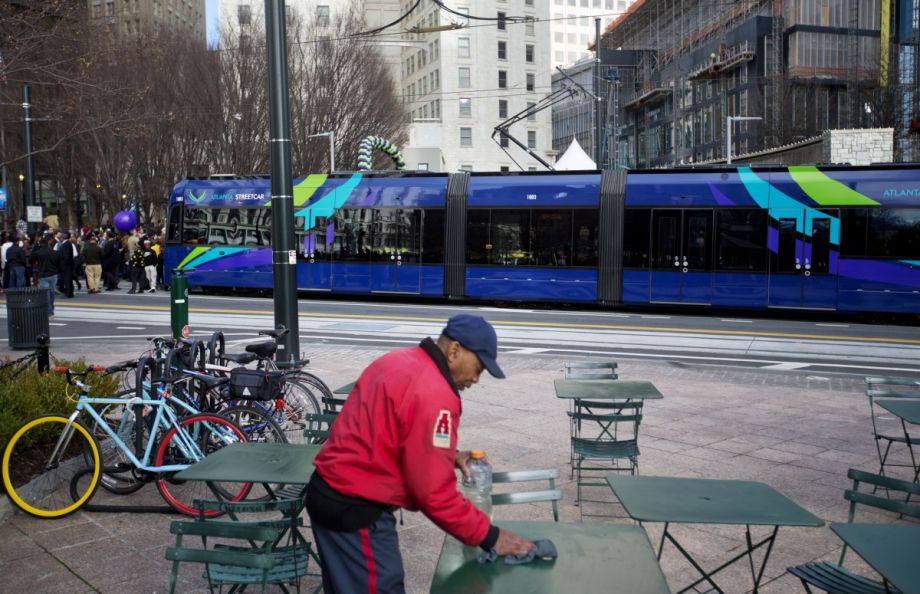 Judging by the media backlash of late, you’d think streetcars were the new Lululemon yoga pants or iPhone Whichever — a Whole Foods version of public transit serving Yuppie developers and tourists more than residents who actually need to get around.

Atlanta, where a 2.7-mile, $98 million streetcar line began rolling December 30th, is no stranger to this skepticism.

“Streetcar is cool, but will it be useful?” an Atlanta Journal Constitution op-ed asked in 2013. Its author, transit consultant Jarrett Walker, questioned the line’s small reach (which was then estimated at 1.3 miles) and 15-minute wait time, arguing that if you missed even one for the short route, walking might be faster — an unfortunate situation for workers, parents with children in daycare and basically anyone needing to get somewhere on time.

But though some officials prize streetcars for their ability to foster development over their ability to move people long distances quickly, Atlanta actually does have lofty, expansive (and, no doubt, expensive) plans for its streetcar. If city officials can make good on their stated goals, the streetcar will one day circle the whole city along the outline of an ambitious park, crossing long-entrenched lines of racial segregation, syncing up with MARTA (Atlanta metro’s transit authority), and even helping to reverse the out-commuting patterns of a metro area full of suburban, rather than city-center, jobs. But first they have to pay for it.

Right now, only the vision is clear.

“The next place that the streetcar should go is a stop on the Atlanta BeltLine,” said Mayor Kasim Reed, as reported in the AJC, at the line’s initial launch.

The BeltLine, a rails-to-trails project that will one day run 22 miles around downtown in the shape of a circle, will include park space, public art, walking and biking paths and, eventually, the streetcar line. Its shape, connecting around 45 different neighborhoods, is especially important. As Rebecca Burns detailed for CityLab last year, it will connect areas of historic segregation — intentionally fractured by industrial “buffers” to separate white and black neighborhoods as recently as the ’60s. And because MARTA’s expansion into the white flight suburbs has been halted time and again for blatantly racist reasons, a public transportation system that could actively unite the city is a big deal.

Meanwhile, its current bare-bones system (MARTA only travels north-south and east-west) means that Atlanta has a high percentage of car ownership and terrible traffic. According to Paul Morris, the man at the helm of Atlanta BeltLine Inc., car-centrism and economic inequity go together for the region.

“It will connect 45 neighborhoods for their short-distance daily needs,” he says of the project. “Historically we have not had great connectivity or mobility — we have one of the more challenged mobility environments among the big cities.”

Lee Biola is the chairman of Citizens for Progressive Transit, an organization that supports the streetcar. He, too, sees potential in the ambitious, circular plan.

“One of the problems we’ve long had is that many of the jobs are in the suburbs,” he says. Now, however, he sees shops and restaurants going in on the streetcar line and skyscrapers rising in downtown and midtown. (Someone should tell Mercedes-Benz USA. The automaker announced this week it will move its headquarters from New Jersey to Atlanta, but reportedly, the campus will be in the northern suburbs.)

“Gentrification, for all of its problems, is generating jobs,” he says, adding that having jobs in the urban core, accessible by transit is good for the region’s upward mobility.

But, of course, the streetcar will not come free to Atlantans either. Along the BeltLine, rents are rising. And funding for the streetcar is still uncertain.

Morris does outline a plethora of potential sources. Together with state and federal funding, the organization is looking at grants and private-sector fundraising opportunities. The entire BeltLine project has also been reliant on a tax allocation district, a local agreement between the city, county and schools to direct certain property taxes into the BeltLine’s construction. But property taxes took a hit during the recession. And now, Atlanta’s public schools claim that the city, which is overseeing the allocation district, owes them two payments of $6.75 million hinging on that agreement.

Morris declines to comment on negotiations between the city and schools, stating that they’re being handled by Mayor Reed. However, he adds those payment agreements were decided upon before the recession.

“If the original agreement were implemented, it would be devastating to the BeltLine,” he says.

Another snarl comes from the failure of T-SPLOST, a 10-county regional transportation package that would have funded around $8 billion in transit and road projects — including streetcar segments along the BeltLine. Interestingly, the measure would have passed in Atlanta, but failed in surrounding counties, a fractured pattern with which the sprawling metro area is all too familiar.

Still, advocates like Biola are optimistic about the streetcar’s future. Questions may arise on the usefulness of its current small reach, but Biola sees it as just the beginning of a system that could transform Atlanta’s car-centrism and sprawl.

“The line is a great start,” he says of the segment that just opened. “But we hope it’s not the end. We very much think it should be expanded.”