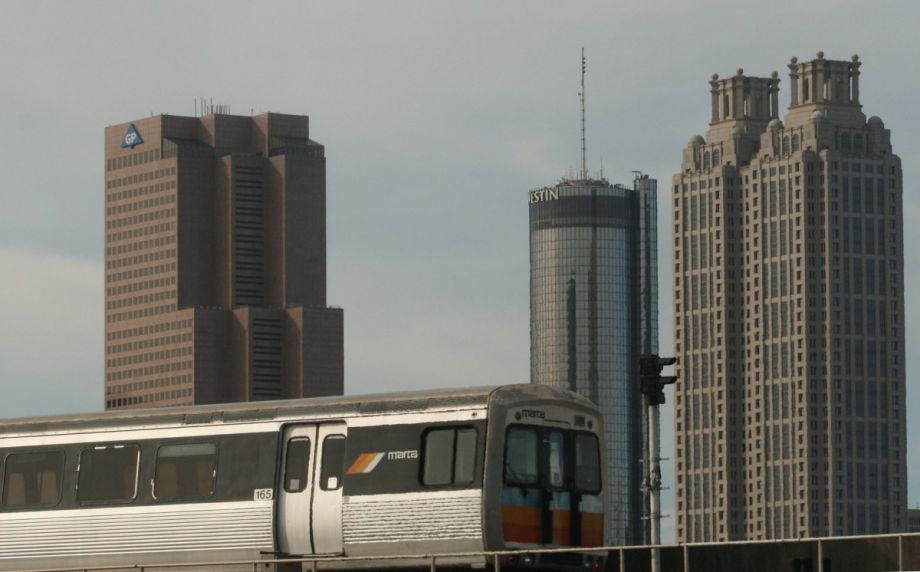 The Georgia Department of Transportation (GDOT) this month unveiled six potential routes for a new high-speed rail system to run from Atlanta to Charlotte, N.C.

A high-speed link between these cities, two of the largest commercial centers in the Southeast, has been touted as a necessary tool to relieve congestion on three local interstates and an alternative to the 15 or more daily flights between ATL and the Queen City.

Here’s a map of the proposed routes: 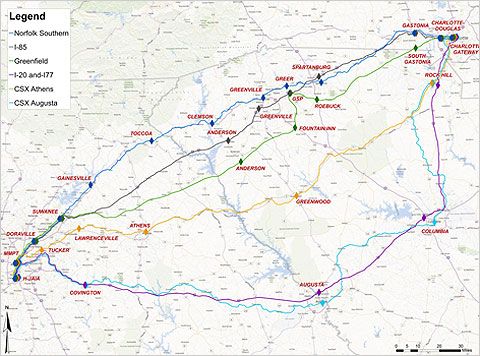 Each has its various advantages and disadvantages. Three of the routes would use existing track from railroad companies CSX and Norfolk Southern, reducing construction costs. The other three would be constructed on entirely new track designed specifically for high-speed rail.

In terms of connectivity with smallers cities, some routes would allow the line to connect with Augusta, Ga. and Columbia, S.C., while other would take a more direct route and connect through the South Carolinia cities of Spartanburg, Greenville and Clemson.

However it turns out, the project represents a significant step forward for public transportation in the region. For years, Atlanta grew enormously (albeit not as much as anticipated) yet invested little in public transportation save for the construction of the MARTA rail system, which continues to suffer from chronic underfunding and low ridership. The combination has led to Atlanta having some of the worst congestion of any major U.S. city. That area voters last year rejected a sales tax increase to fund public transportation and highways underscores how unaccustomed the region is to large-scale public transit investment.

Despite Atlanta’s central location in the Southeast and its prowess as a business center, Georgia has, unlike other states, invested little in feasibility studies for high-speed rail projects. It thus received a paltry $750,000 from the $8 billion in federal stimulus money that President Obama set aside in 2009 to study and build high-speed rail nationwide.

Meanwhile, other states were allocated billions of dollars over the next decade to improve and begin construction of their high-speed rail systems.

The real question now is whether the Atlanta-Charlotte route will ever actually get built. Massive infrastructure projects, particularly those involving high-speed rail, have a tendency to die on the drawing board, often as a result of their construction time and cost ending up higher than anticipated.

This happened in Florida when Gov. Rick Scott, citing unpredictable cost overruns and an aversion to leaving the burden on taxpayers, cancelled a Tampa-Orlando high-speed rail line, for which the Obama administration had allocated more than $2 billion.

However, the Atlanta-Charlotte project does appear to have several strengths to run on. Perhaps most importantly, the line is planned to connect with the yet-to-be-built Southeast High-Speed Rail Corridor, which will connect Washington, D.C. and Charlotte and for which construction is set to begin later in the decade.

Other cities in the region have made progress on their own high-speed rail, and the Atlanta-Journal Constitution has argued that Atlanta may lose its long-cherished status as the Southeast’s premier transportation hub should Georgia officials fail to move on funding high-speed rail projects.

As the Journal-Constitution’s Jay Bookman points out, Atlanta became the metropolis it is today largely because of city and state government investment in transportation, positioning the city as the natural logistics center for the Southeast. However, the state’s recent aversion to upgrading its infrastructure to meet 21st-century transportation needs means that Atlanta could miss out on the future connectivity it needs.