As SEPTA Looks Forward, a Few Suggestions for Improving Its Regional Rail – Next City

As SEPTA Looks Forward, a Few Suggestions for Improving Its Regional Rail 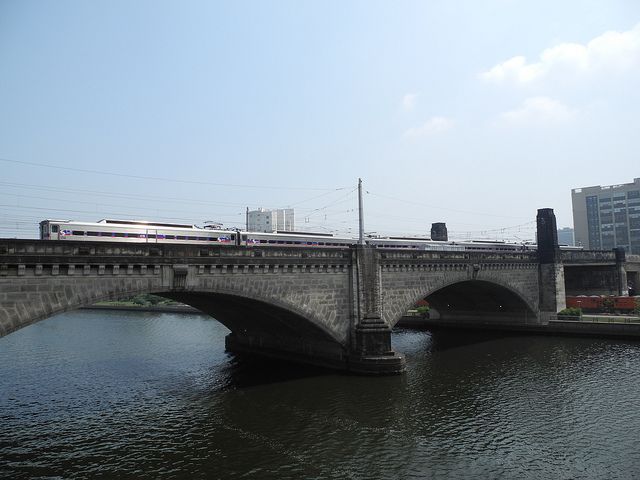 The Philadelphia metropolitan area is blessed with an unusually expansive regional rail service, with its 13 tendrils curling through four surrounding Pennsylvania counties and into Delaware and New Jersey. The Southeastern Pennsylvania Transportation Authority (SEPTA) recently upgraded its trains, which service both the suburbs and vast swaths of Philly’s northeastern and northwestern neighborhoods that are untouched by limited trolley and subway-elevated lines. Its trains keep to their timetable 95 percent of the time. According to the American Public Transportation Association, it’s the sixth largest regional rail network in the nation by every metric.

But the system’s blessings are not universal. SEPTA’s subway-elevated, trolley and bus fares are the cheapest of any major American transit system. Even with the July 1 fare hike, which raises cash fare above $2 for the first time since 2001, Philadelphians will still pay less than $2 for non-cash fares, which will increase from $1.55 to $1.80. Regional rail is significantly more expensive, even for trips within city limits. If travelers at 30th Street Station want to go to Frankford on the Market-Frankford elevated line, they can get there for $1.55. If they want to go to Manayunk on the Norristown Regional Rail Line, they will have to pay $4 ($4.75 come July).

Both trips are less than 30 minutes from a central transit hub to a stop in Philadelphia. But even with high gas prices, why forego driving and pay $8 for a round trip to Manayunk? These prices ensure that mostly suburban commuters will use the regional lines.

“When SEPTA took over commuter rail traffic in 1983, the vast majority of riders were making very short trips,” said John Hepp, assistant professor of history at Wilkes University. “SEPTA deliberately raised short-haul fares and closed most of the commuter rail stations in the city. Both Chestnut Hill locals [which only travel within city limits] used to run half an hour all day long, even in the off hours. SEPTA cut that with the idea that they wanted to take service away from those areas and assign them to long-haul services.”

Until 1976, a jumble of competing private operators ran the Philly metro’s regional rail. Fares were charged by station, as opposed to by fare zones today that encompass numerous stations. In 1960 Pennsylvania established the (Philly-funded) Passenger Service Improvement Corporation (PSIC) to help the two principal companies run their stations, which had been hemorrhaging money. Stations covered by the deal were almost all within city limits, and their prices were lowered to match city transit fares. The Merion stop on the Paoli line is equidistant from downtown as, say, Tulpehocken station in northwest Philly, but its prices were higher (the Paoli stop itself, 20 miles away from Suburban Station, is pricier still). In 1975 PSIC station prices were 20 percent lower than counterpart suburban stations at similar distances. But the next year the federally controlled Consolidated Rail Corporation (Conrail) took over the private commuter lines. Prices went up 67 percent at the PSIC stations and 33 percent elsewhere between 1975 and 1980.

Many regional rail stations in Philadelphia were shut down because of decreased ridership caused by huge price increases. On the Paoli/Thorndale Line, which serves the upscale suburban Main Line, only 52nd Street station in West Philadelphia was closed. On the Trenton Line through North Philadelphia and the Northeast, nine of 14 urban stations were closed. The Chestnut Hill locals serve more affluent parts of the city, where people could more likely afford the huge price increases, but many stations closer to downtown were closed. Regional rail ridership fell from 27.1 million in 1981, already 20 percent lower than 1979 due to a 79 percent fare increase in that period, to 12.8 million in 1983 (a lengthy strike exacerbated the decline).

There are many reasons for the upheaval of the 1980s and the reorientation toward suburban commuters. Conrail’s management is generally agreed to have been disastrous, and SEPTA’s takeover of the regional rail system coincided with Reaganite cuts to federal public transit funding. In 1982 alone, national mass transit funding fell by 20 percent, a trend which continued throughout the decade. As a 1991 New York Times article noted, “Federal support for mass transit has declined by half in the last decade.”

SEPTA Chairman David Girard-diCarlo unsuccessfully tried to secure replacement funding from the Pennsylvania counties. In October 1981, less than a year after opening his campaign for local funding, the Philadelphia Inquirer reported that the request was flatly denied. After leaving a closed-door meeting with county officials, Girard-diCarlo warned of cuts “tantamount to losing the entire [commuter rail] system, if not in fact losing the entire system.” According to Delaware Valley Regional Planning Commission analysis, the Philly metro contributes less local mass transit funding per capita than almost any other major urban area — just $20 in comparison with $104 in New York City and $59 in Dallas.

As SEPTA took over the regional rail system, work neared completion on the Center City Commuter Connection (CCCC) tunnel, expanding the number of railway tracks underneath downtown, speeding up service and uniting previously isolated stations. Before the tunnel, commuters traveling from Bryn Mawr to Germantown, located on lines controlled by rival railroads, had to not only change trains but change stations. In theory, the CCCC allows the rail network to function as a regional system and not just a commuter service, greatly facilitating quick transfers between lines.

“If you go to German, French, Japanese cities you have those [regional rail] lines running at least one every 20 minutes, and if you have more frequent service you can transfer from one line to another and you get a whole network,” said Vukan Vuchic, professor emeritus of electrical and systems engineering at the University of Pennsylvania, who has written numerous SEPTA-commissioned reports on regional rail’s post-CCCC potential. “We are still mostly commuter-oriented. We are not really working hard to serve the entire region.”

Service cutbacks effectively counterbalanced the CCCC’s potential. Most trains only run once an hour, making transfers between lines difficult. Vuchic said this could be solved if SEPTA rearranged its rail labor structure, namely its old-fashioned method of fare collecting. Conductors walk the length of the train punching tickets from each individual passenger, meaning that four to six workers staff each five- to six-car train. The average train could be slimmed down to two or three cars, allowing for more frequent service and, probably, little net job loss.

“We are a century behind,” Vuchic said. “Would conductors lose jobs? No. We would have more drivers. Maybe some of the conductors can be retrained. You just have the same number of people operating many more trains. We would have trains operating every 20 minutes instead of every hour at very slightly higher cost and huge income from new riders.”

“Many more trains” wouldn’t have to mean purchasing new vehicles, as most SEPTA cars are electric multiple units that can run separately from one another.

The new payment system that SEPTA will phase in over the next two years includes railway turnstiles at the five Center City hubs, eliminating the need for conductors to punch every individual ticket. The other principal task for conductors is adjusting the car exits on low-level platforms to allow passengers to disembark safely, and this task can be easily automated or eliminated by universalizing platform height. But SEPTA has no plans to retrain conductors or reorganize regional rail operations to allow for more frequent service.

“Collecting fares is only part of the conductor’s responsibility,” said SEPTA chief financial officer Richard Burnfield. “I’m not going to say their jobs won’t change at all, because the fare collection process is going to change. But you will still be able to buy a ticket on the train because there are some individuals who don’t take the train all the way into Center City… 5 percent of riders don’t [take regional rail downtown] and it will continue to be the conductor’s responsibility to make sure those fares are collected.”

A few blocks away from the CCCC, the successful PACTO system, which connects Philly to southern New Jersey, disproves the need for conductors. Opened in 1969, PATCO fare collection is totally automated. One driver operates each train and there no conductors or agents at the stations. There is no reason for SEPTA to preserve an expensive host of jobs to service 5 percent of ridership. The agency’s no-layoff commitment during the transition to the new payment system is commendable, but ending the uneconomical conductor system would not have to be a brutal exercise. These workers are organized, so SEPTA and the union(s) could work out a deal akin to that made with the stevedore unions, which accepted the automation of many of their jobs on the condition that generous payouts were granted to those who lost work, and remaining members were extensively retrained and guaranteed a chunk of any productivity gains.

The analogy isn’t one-to-one: SEPTA operates a public good that does not (and should not) try to turn a profit. But highly efficient rail service would save on labor costs and increase ridership and fares. More frequent train service — perhaps 24/7? — would heighten the appeal of living close to regional rail stations and, if Harrisburg allows it, SEPTA could reap the profits from land around its stations. That could be just the kind of dedicated funding SEPTA needs to facedown future iterations of this year’s $38 million budget deficit, without relying on the whims of the state. (Attempting the regional tax could be worth another try, too, as low-service SEPTA counties like Chester could spend some revenue on roads.)

With a dedicated funding source and more efficient rail, SEPTA could mitigate the cost of inner-city rail fares again as it did in the 1960s and early ’70s and reopen some of Philadelphia’s shuttered-stations. There is clearly high demand for inner-city rail services at the right price. Last year more than 5.2 million trips were taken on the city’s lone two subway-elevated lines. All 13 regional rail lines served much fewer than 3 million riders, despite increased ridership over the previous year. The new payment system is a change full of possibility.

But if the reorganization of the regional rail zone structure isn’t regressive, that’s because the system can’t get much more regressive. The reduction of five zones to four will save money for many suburban commuters (along with a few hundred “reverse commuters”), which could be better spent, say, making all the rail station platforms on at least one line flush with the trains, dispatching the other major task of conductors. Big things come from small beginnings.