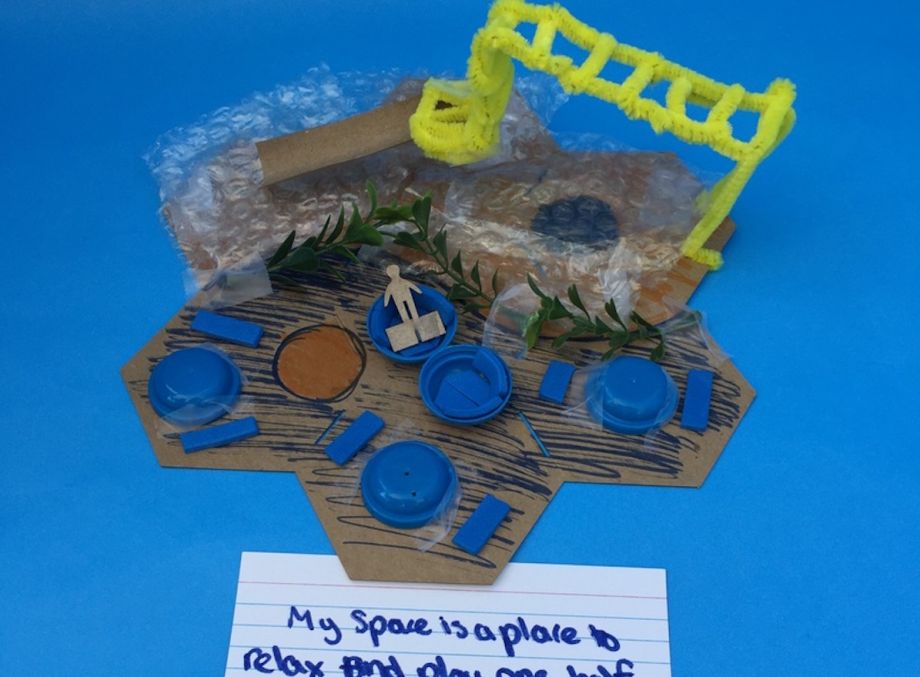 While the city of San Jose is in the midst of a makeover competition for downtown St. James Park, artist Corinne Okada Takara is inviting the public to create their own designs — using popsicle sticks, pipe cleaners and cardboard tubes. The city has funding to completely rebuild the underused park in the next five years, and in the meantime is using the tax revenue from a special parks district to fund temporary activations. Takara’s Prototyping Public Spaces workshop is part of that effort and aims to engage everyday citizens in public space design.

As an artist who often creates public works, “I was noticing that in our community meetings, they were scheduled often at a time when we weren’t getting a full representation of our community’s demographics,” says Takara. She started to design projects that would get more people in on the conversation.

For the first one, which took place as part of the Zero1 Biennial in 2012, Takada visited San Jose schools to hear children’s ideas for creatively reimagining bus shelter design. She incorporated their input into a full-size model, which included a hanging garden and a tin-can phone that allowed visitors to listen to and record more design ideas using a clever hookup to her iPhone. Visitors could either make physical small-scale models of their own, or learn to design one on available computers using CAD software. That project ended up laying the groundwork for public art installations on bus shelters.

In 2015, Takara worked with the San Jose Public Library on a series of pop-up maker studios in underused public spaces. She installed temporary furniture 3D printers and modeling supplies in the spaces, and for three weeks in a row, asked the public to “reimagine the very dead spaces they were in,” she says.

Now that furniture is being used at the St. James Park pop-up, a collaboration with the Alum Rock Educational Foundation, whose main purpose is to improve education opportunities in the Alum Rock neighborhood of San Jose. Takara teaches at an art and design thinking camp for middle-schoolers there, and Kim Mesa of Alum Rock is deeply involved in local neighborhood organizations and in keeping the community informed about city actions.

“The city has a downtown but it also has very siloed communities, with really great organizations and activists and arts, but until recently there hasn’t been a really good effort to connect everybody,” says Takara. Students from the design summer camp are helping to lead the workshops, so “it’s kind of cross-pollination through the youth, through maker activities, through activating underused civic spaces,” she says.

St. James Park, one of the city’s oldest and most significant, has become one of those spaces. “[It] used to be the central part of San Jose, it was always vibrant,” says Mesa. But as the city has grown and spread out around it, the outer neighborhoods became centers of activity “and downtown sort of fell into disuse.” The city has been trying to revive interest through yoga, concerts and other pop-up activities that seek to include, not alienate, the park’s main users — homeless men and women. But the park still needs physical upgrades too.

At the Prototyping Public Spaces workshop, which took place during the city’s second open streets Viva Calle event, children used cardboard tubes, markers, and more to design play areas. They answered the questions, “what is your design, what need does it serve, and how does it address that need?”

Takara has found with her other workshops that those questions are much easier to answer when there’s Play-Doh handy. “If you ask the question how do we invigorate a public park, you can get blank stares at a public meeting, but if you’re sitting there at a table and you’re asked to make something, it’s much friendlier, and you’ll get more conversation happening there between people who are participating,” she says. Even the mayor showed up to see the workshop.

Those who didn’t want to create a model could also fill out a card with their desires. Most people’s wants were pretty simple: clean, working bathrooms, water fountains. Takara also posted information for another project she and university students are doing with the city to design assets like shower structures for the city’s homeless. Often, different city agencies are asking the public the same questions at the same time, she says, and it’s good to try to bring them together in one place.

Through all of her projects, Takara is perfecting ways to creatively engage. She places a ring of benches a little farther away from the action, so the hesitant can feel included without feeling pressured. She found people are genuinely excited to speak into a tin-can connection to her iPhone, much more so than into the iPhone itself. When trying to gather public input, “it can never just be a clipboard,” she says. “People will run away. It has to be multiple visits, different levels of engagement, and ways to participate.”

Indeed, when Mesa and Takara wrote the grant for the St. James pop-up, it was for three visits to the park, but the city funded just one as a pilot. They’re hoping the city will have them back to continue the process, and possibly expand to other spaces. Mesa says it’s especially important for young people to feel involved in the political process, and to have the opportunity to learn from people across neighborhoods.

“If they learn at a young age that they have a voice, and they learn how to express that voice, they’ll grow up wanting to do that always. It gives them more of a sense of community,” she says.