An Absurd Transit Duplication in Dallas – Next City

An Absurd Transit Duplication in Dallas 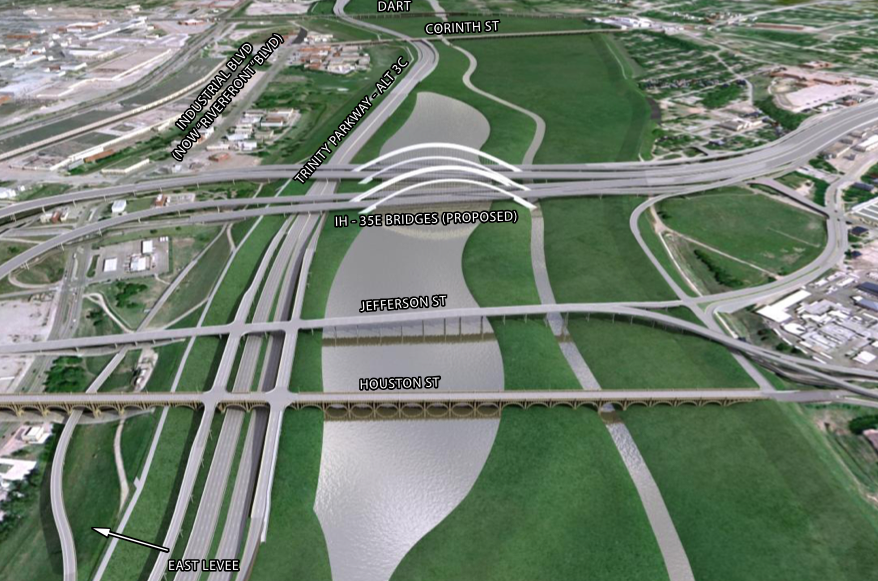 Even as Dallas finishes work on a new light rail line, plans for a new highway along a parallel corridor advance. Credit: NTTA

This summer, Dallas’ Orange Line will be extended five stations northwest of downtown. The light rail service will expand what is already the country’s longest such network and improve connections between central Dallas, the suburb of Irving and — in 2014 — Dallas-Fort Worth International Airport.

Yet billions of dollars in new construction have barely increased transit use; just 4.2 percent of the city’s commuters use public transportation to get to work, according to the U.S. Census Bureau. If there is one city that proves that simply building transit does not attract people to transit, this is it.

Investments in Dallas’ road infrastructure might provide some explanation for the situation. An astonishing seven grade-separated highways extend radially out from the city center in all directions. (For comparison, Chicago has six grade-separated highways radiating from its downtown; Philadelphia five; Boston five; and San Francisco three.) This is a city designed for the automobile.

At least some of the city’s residents apparently have not had enough of those roads. Early this month, Dallas Mayor Mike Rawlins announced his support for a new toll road along the Trinity River whose alignment would not only parallel existing highways and the Orange Line, but it would significantly reduce the value of a new park proposed for the area. If public funds can be found to cover at least part of its $1.4-$1.8 billion cost, the project appears likely to be built over the next decade.

This is transportation planning at its worst. Public dollars are being spent on two separate transportation projects that offer similar benefits and serve the same corridors. The advantages of the investments made in rail — namely, the ability to avoid congestion — are being marginalized by the construction of a huge new road that will, at least for a few years (until the congestion returns), make choosing the train a poor choice. At the cost of billions and in the name of congestion relief, transit’s role is being minimized. And the result is that all this investment will again produce low ridership.

Unlike most American cities, Dallas has room for a new highway, or rather, “room” that doesn’t require the bulldozing of dozens of homes to make way for a multi-lane corridor. The space comes in the form of the 2,000-foot wide Trinity River park, which extends on a northwest-to-southeast diagonal through the center city.

Since the late 1990s, local leaders have been pushing for a new, 8.5-mile toll road along the alignment from U.S. 175 to Interstate 35E to counter the congestion along existing center city roads. In 2007, a referendum to stop the project before it could be built lost by a 53-47 vote. Part of the appeal was the fact that the project would include major improvements for the river basin, including the creation of new parks, sports fields and two lakes. All in the shadow of the highway.

The North Texas Tollway Authority (NTTA) conducted a series of public meetings on the project this month. NTTA manages a number of other toll roads in the region. Despite needing more than $1 billion in public and private funds to build the road, Jim Schutze’s comment in the Dallas Observer last week seems apt since the mayor has signed on to the project:

The dearly held belief of many road opponents that the thing can’t be built because the money isn’t there is a false hope. If the concept stays on the boards and the political endorsements continue to flow in, the money will be found.

Meanwhile, the arguments presented by the NTTA at the public hearings in favor of the road’s construction are almost comical:

The Purposes of the Trinity Parkway are to:

The problem is that the road’s construction will likely do little of the sort in the long run. First, while the construction of a new highway will result in gridlock relief on existing roads for a few years, there is ample evidence that increasing road capacity simply results in more drivers taking advantage of the roads. Congestion will return. Second, it is unclear how building a highway in the midst of a river basin will “minimize” impacts on the environment, even if the road includes windmills in its medians. Third, the project would be compatible with local development plans… if Dallas wanted to improve access to its suburbs by building a road that bypasses downtown.

Finally, how a major highway will allow for “modal interrelationships” is completely unclear. There are no plans for bus rapid transit or any sort of improved transit program to accompany the road.

To what degree will Dallas’ choice affect the patterns of transportation and land use in the region? The mayor has argued that the road is crucial to the city’s future growth. But what growth will the tollway encourage?

An examination of population change between 2000 and 2010 in Dallas and Milwaukee makes for an interesting comparison. Both saw little overall population change in the previous decade (Dallas’ population increased by 0.8 percent, while Milwaukee’s declined by 0.4 percent), but downtown both grew quite significantly. Both cities saw significant population growth, while areas outside of the core lost population.

Population change between 2000 and 2010 in Dallas (left) and Milwaukee (right), at the same scale. Credit: Social Explorer

Milwaukee demolished a downtown freeway in 2002. Despite having no urban rail transport infrastructure, its transit commute share is twice that of Dallas (8.5 percent). The decisions its leaders have made about how to invest in new transportation capacity have clearly provided benefits to the downtown core even as the economy of the rest of the city continues to struggle. Dallas’ decision over whether to build a new highway downtown could profoundly affect whether its center city moves in Milwaukee’s direction or away from it.

With a new road, Dallas will be encouraging more commuters to drive through the city, and decades of evidence — forgive me for repeating this truism — have demonstrated that designing around the automobile limits the ability of cities to develop effectively. Highways, by encouraging car use, make the walking, transit-oriented city impossible. The growth that Dallas has seen in its central areas could be ephemeral with the wrong decisions made.

Transportation planning is about the choice between transit and roads, but it is also about whether to invest at all. Dallas has spent billions of dollars on a rail rapid transit network, but it has simultaneously undermined it with the construction and maintenance of huge road capacity. What is the point of investing in the former when the latter makes it unviable?