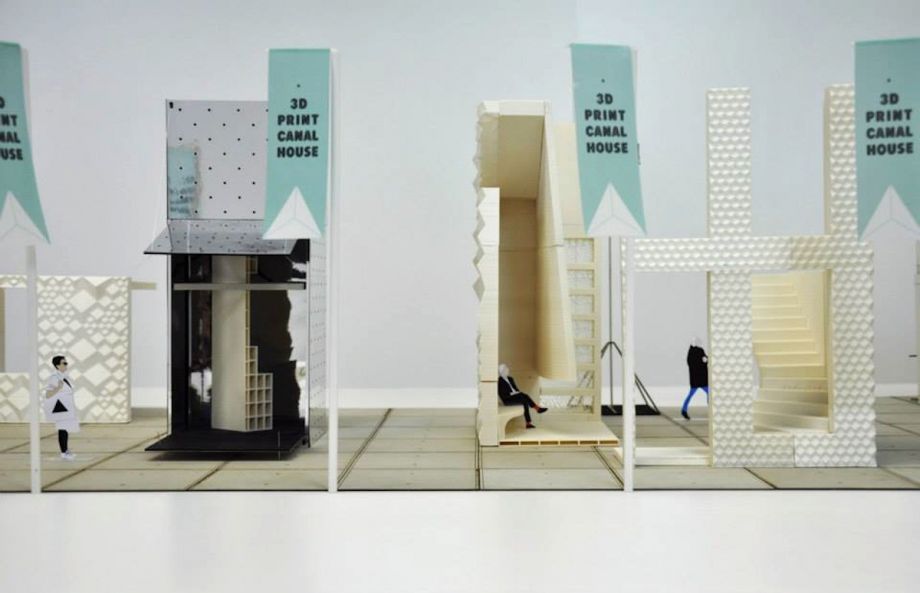 In Amsterdam, an international team of innovators is working on a solution to the housing crisis, and affordable housing advocates around the world are watching. The project, dubbed the 3D Print Canal House, combines a building site, research center and open exhibition space. (You too can eye the work-in-progress: The site’s open to the public, and there are audio tours. President Barack Obama stopped by for a visit earlier this year.)

Using 3D printing — which builds or “prints” an item layer by layer, based on cross-sections of a three-dimensional digital model — to make houses is much faster, safer and less wasteful than standard construction methods. The result is far more affordable housing; earlier this year, Chinese company WinSun built 10 concrete houses in a single day with the method, at a mere $5,000 each.

Project architects DUS can’t give exact costs for the Amsterdam Canal House yet, but hope the three-year, “research by doing” initiative will thoroughly explore how 3D-printed architecture will affect the building industry.

“The goal is to create a cost-effective building technique for building sustainable and comfortable houses,” says Hans Vermeulen, one of the architects.

The fast, inexpensive and mostly automated technique — actual “construction” will likely require a few weeks at most — make it the perfect solution for public housing and well-suited to cranking out quality replacement housing in disaster areas. Furniture can be printed along with a structure.

The Amsterdam team is doubling up on environmental benefits by printing with plastic made from vegetable oil, rather than petroleum. The building will be printed in pieces, with rooms fit together later to create the complete structure, and will marry local history and culture with its modern production methods. True to its name, the design will echo the iconic Amsterdam canal house — traditional, 400-year-old homes that are ornately decorated.

“The 3D Print Canal House is a pioneering example and the first house that is being printed on the spot with the largest portable 3D printer,” Vermeulen says. “However, there are quite a few other initiatives on a similar large scale around right now, and chances are there will be more and more over the next months and years.” (When finished in 2017-2018, the site is slated to become a public building and research center.)

One of those other initiatives is “contour crafting,” an automated 3D-printing construction method developed by Behrokh Khoshnevis, of the University of Southern California. Contour crafting uses quick-drying wet concrete, with reinforcements, electrical units and plumbing automatically inserted during the process. The very efficient technique can print a 2,500-square-foot house in 24 hours; cost savings are estimated at 60 percent compared to traditional construction.

While you may be conjuring images of sprawling, cookie-cutter subdivisions, this mass-production method can actually produce custom homes — just feed in a batch of personalized blueprints. Since it creates structures digitally, there are no limitations on complexity or shape. Right angles need no longer rule the day.

3D-printed architecture does have its drawbacks. The hodgepodge of building codes in different jurisdictions presents a challenge. The Municipality of Amsterdam is partnering with the Canal House project to investigate the ins and outs of 3D-printed building construction when it comes to regulations. (Choosing from a hefty database of pre-approved designs and modifications might make the process easier for future prospective homeowners and zoning commissions.)

Since the technique requires little manual labor, there are also concerns about job loss in the sector. However, Khoshnevis suggests that 3D printing could even out gender inequity in the construction industry, and involve workers in its “more creative” aspects.

While the 3D Print Canal House remains a research and demonstration project, livable 3D-printed houses have already been built. Regulatory issues are being ironed out, and the impressively efficient contour crafting method is projected to enter the construction industry within one to two years. When all the pieces come together, automated mass construction may make housing much more affordable not only for the poor and displaced, but for everyone.

Kate Dougherty is a freelance writer, researcher and geographer. She has written about science, technology and the environment for ideaCONNECTION, Healthy Times Indonesia Magazine, EnvironmentalScience.org and InternetTutorials.net.