Albuquerque Looks to New Bike-Share for Downtown Boost – Next City 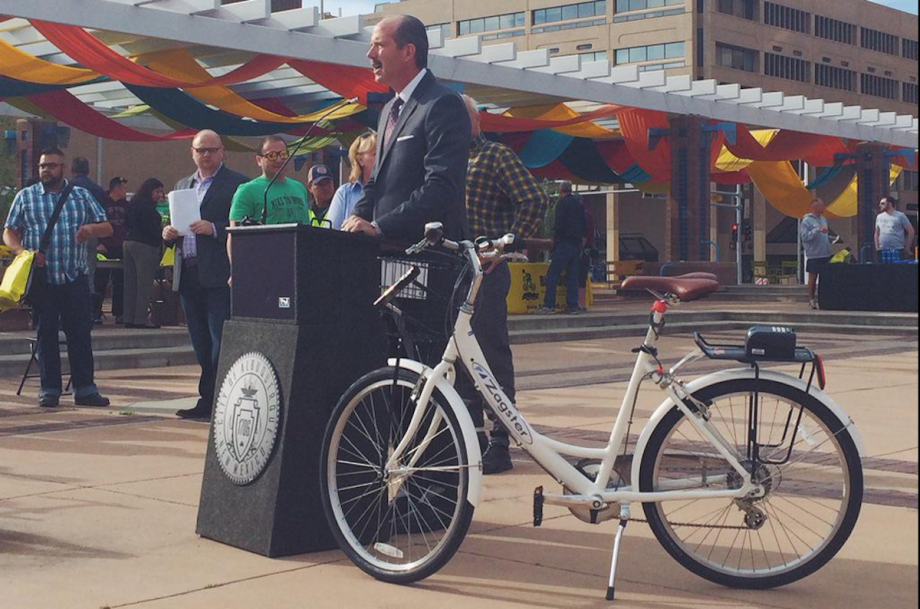 As cities around the country celebrated Bike to Work Day on May 15th, Albuquerque, New Mexico, rolled out its new bike-share pilot program.

Named BICI — a shortened version of bicicleta, the Spanish word for bicycle — the pilot launched in the downtown core with 65 bikes at 13 stations. BICI is using Zagster, a less expensive alternative to the kiosk-based systems of Motivate and B-Cycle that most cities have. The bike-share program comes as part of a broader revitalization effort for Albuquerque’s flagging downtown.

“Our downtown is one of those struggling urban core neighborhoods that many cities face,” says Lola Bird, executive director of nonprofit DowntownABQ MainStreet Initiative. “We knew [bike-share] was something we could accomplish in a very short time frame and it would get a lot of press and would highlight all the additional positive things that were happening downtown.”

DowntownABQ started working on the pilot about a year ago, after downtown businesses and residents expressed interest in bike-share in a survey about downtown infrastructure improvements. Bird approached the local utility company PNM who agreed to provide seed money for 10 bikes.

“There was doubt if it could work if it was that small of a scale. At the same time we thought we just have to get this out there and say it’s coming,” explains Bird.

Word started to spread however. Valerie Hermanson, a planner with the multi-county agency the Mid-Region Council of Governments (and a Next City Vanguard) got involved, which Bird says lent the project an air of legitimacy.

“Next thing we knew we had sponsors calling up saying they wanted to be a part of it,” says Bird.

Hermanson is not surprised by the enthusiasm. “Businesses looking to locate downtown have one more reason to move downtown. Employees can get around now,” she says. “Or visitors to shops can do more than one thing now. People can get out on a bike as opposed to maybe taking a taxi.”

Hermanson and Bird are hoping all of those things help boost the downtown economy.

“A lot of studies and data indicate that a lot of people will stop in a business if they’re walking or biking,” explains Bird. “It helps encourage that kind of investment downtown if people know there are going to be more cyclists or more pedestrians [passing] by their businesses.”

The League of American Bicyclist’s 2012 report “Bicycles Mean Business” collates many of the studies Bird references. Perhaps most relevant to BICI, a survey of Capital Bikeshare users in D.C. found that 83 percent of respondents are “more likely to patronize a business if it is located near a Capital Bikeshare station.”

But though the sponsors had come calling, the city was still on a tight budget that put kiosk and docking station-based bike-shares like those found in D.C., New York and Boston out of their reach. Hermanson says the credit card kiosks can add as much as $10,000 in cost per station. They instead went with Zagster, a bike-share company that’s worked primarily with hotels, universities and businesses. Albuquerque is only the third city system they’ve done. (Cleveland also uses Zagster.)

Each Zagster bike is equipped with an electronic lockbox similar to those used by real estate agents on homes they’re showing. When you want to ride a bike you either use a smartphone app or text a number provided to get the lockbox key code. The lockbox has a key inside that you use to unlock a regular U-lock at the rack. When you’re done riding, you check it back in with the app or by texting the word “end” to the same number.

Hermanson says they’ve been able to pass the savings along to users. Annual memberships are just $25, monthly memberships are $15, and day passes are $3 (compared to many cities with annual memberships in the $85-$150 range). Users can ride the bikes for up to 90 minutes without incurring additional charges.

Russell Meddin, editor at The Bike-Sharing Blog and author of the Bike-Sharing World Map, agrees that Zagster’s major advantage is cost. But, he says, that comes with some trade-offs. First, checking a bike in and out with Zagster is more complicated than sliding a bike in and out of an automatic docking station. He says, “with public use bikes, you need to have a system that’s extremely easy” to encourage people to use them.

The second issue to Meddin’s mind is visibility.

“The really very good thing about a kiosk-based system is you have a ‘totem’ to tell people here’s bike-sharing,” he says. “As you’re walking down the street there’s a visual clue to tell people there’s a place to pick up bikes. You don’t have that with Zagster.”

Ultimately though, Meddin thinks the cost advantage makes sense for cities such as Albuquerque.

“Really and truly, Zagster is great for bringing shared bicycles to markets that probably would not be able to afford and sustain larger automated systems,” he says.

Bird says so far, so good with Zagster.

“We get that in other communities when there’s so much other transit available and there’s so many ways to move around, maybe a more infrastructure-heavy system works better. But for us this seems to be a really good fit so far.”

The pilot goes until May 2016, but Bird says it already seems to be a success, with private developers and businesses calling them expressing interesting in getting stations near them.

“Once it’s in place, no one’s going to allow it to get taken away,” Bird says. “The pilot is to collect info about best places for new stations and how can we support increased use of system. But we’re moving forward definitely.”