Akron Is Turning a Closed Freeway Into a Pop-Up Forest 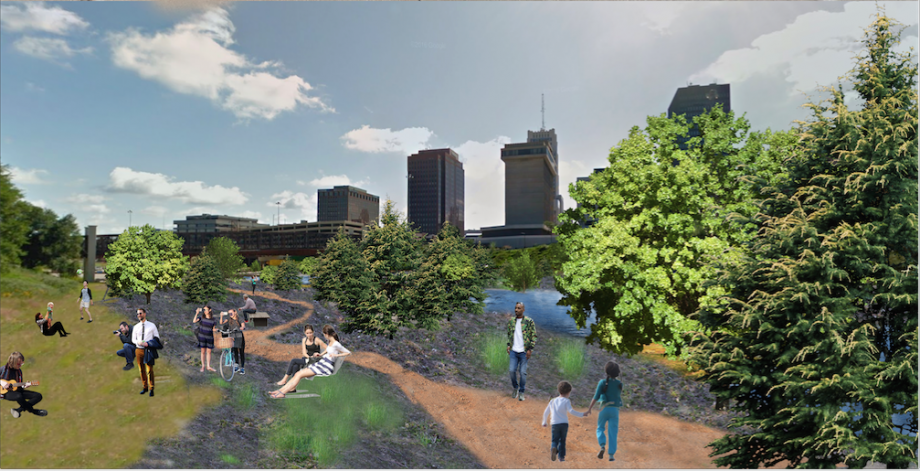 Akron’s Innerbelt freeway was a failure, pretty much from the start. Despite a 1963 city report warning that isolating stable neighborhoods by slicing a freeway through them would accelerate their decline, the design did just that, gutting black neighborhoods and cutting them off from downtown. Political support waned; public meetings grew contentious. The highway was never finished, and the stretch that was built failed to achieve its only goal. Meant to speed traffic between downtown and suburbs, the Innerbelt only saved commuters traveling westbound on Interstate 77 an average of 1.25 minutes.

Nor did it stem the flow of businesses from the city core to the suburbs. “It is extremely doubtful that the new freeway, even if completed, will do much to attract retail businesses or shoppers downtown,” reads a 1977 city report. Built for 120,000 vehicles a day, only about 18,000 use it daily.

Now, most of the Innerbelt is slated for closure over the next year. One mile will be downsized from highway to surface street, leaving 35 miles of concrete possibility. With the city striving to attract residents and businesses downtown once again, two Knights Cities Challenge winners are imagining new uses for the space that could reestablish connections between severed neighborhoods.

“For Akron in particular it’s interesting because it’s a city that’s been built on the automobile and on the tire industry, to take a piece of that history and say that maybe it’s not working as well as it could be for us anymore,” says Hunter Franks, artist and 2017 grant winner. He received $214,240 to create the “Innerbelt National Forest,” a temporary park on two acres of the former roadway. Two years ago, he received another Knight Cities grant for 500 Plates, a community dinner held on the freeway, where he asked residents what they wanted the space to become.

Jonathan Morschl, board member of the West Hill Community Development Corporation, which serves one of the neighborhoods adjacent to the highway, agrees.

“It’s really been a dead link for decades,” he says. Where the Towpath Trail abuts the Innerbelt in West Hill, linking the neighborhood to downtown, Morschl sees people beating their own paths down to reach it, suggesting to him that there is a demand for connections other than the highway.

Last year, Morschl, an architectural designer, also won a Knight Cities grant to wild up the Innerbelt: $120,000 to design a mountain bike park on about 2 acres of the former freeway. Still in the design phase, he says he’d love for his installation to coincide with the Innerbelt National Forest and to work with Franks on public outreach. Morschl has a vision for a temporary mountain bike park, “but if the community doesn’t deem it necessary, it’s not going to be successful,” he says. “Bringing in a project like Hunter’s can be a very cool temporary solution for now, and it can open people’s eyes to what they would want there.”

Franks plans to work with local community groups and speak to neighbors about the future of the Innerbelt after the temporary installations are gone. One mile of the freeway is already closed as it’s transformed into a surface street. The remainder of the freeway should be decommissioned by spring 2018; Franks hopes to install that summer.

First, though, he’ll talk to neighbors, University of Akron students, and others about what they want to see there. Light installations, trees, seating, and other elements are all possible in the short-term. “The goal is also to create a conversation about the long-term use of the space,” he says.

The city has no concrete plans for it yet. A park is possible, though it could also be developed commercial or residential. Morschl says right now the city isn’t growing at a pace where housing is a pressing need, but, close as it is to downtown, the site could be very attractive for that.