Adrian Benepe and the Legacy of Public-Private Partnerships in NYC 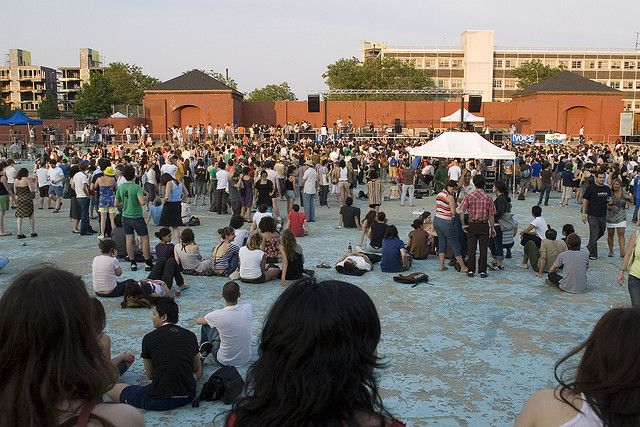 Brooklyn’s McCarren Park Pool in the years before reopening with actual water for swimming. Credit: Andy Clymer on Flickr

The mood was celebratory at last Thursday’s reopening of the McCarren Park Pool, following its 28-year closure and three-year, $50-million renovation, in Williamsburg, Brooklyn. After Mayor Michael Bloomberg led a series of remarks, a swim-trunk-clad Adrian Benepe, New York City’s Parks and Recreation commissioner, peeled off a NYC Parks T-shirt and dove into the water, alongside a collection of neighborhood children.

In many ways, this was a victory lap for Benepe. During an era of slashed municipal spending and declining revenues, he has secured $4.5 billion dollars from the Bloomberg administration for the city’s recreational spaces, including 730 acres of new parks. Having spent a decade at the department’s helm and several more among its rank-and-file, he will leave his post after Labor Day for a newly created position with the national non-profit Trust for Public Land.

Benepe is credited with the “most ambitious program of building and refurbishing New York City’s parks since the era of Robert Moses,” who debuted McCarren Park Pool in 1936 during one of the city’s most sweltering summers. Back then, before municipal pools were sprinkled throughout the city, over 400 youths drowned each year, largely from their attempts to cool off in the unsupervised rivers framing New York.

“It costs about $100 to drown-proof a kid,” Benepe told the New York Times recently. The department will offer free swim lessons for all ages at the city’s 55 outdoor public pools starting in July.

Meanwhile, the tab for maintaining and creating parkland is much steeper, and Benepe has earned criticism and praise for engineering innovative funding structures, which often rely on public-private partnerships.

For example, the city is currently seeking corporate sponsors for its basketball courts and dog runs to raise $5 million in funds, with the possibility of expanding such sponsorship to bring in upwards of $13 million. More controversially, the phased construction of Brooklyn Bridge Park is being funded with city and state money, but an upscale hotel-condo complex within the park is slated to assist with operational and maintenance costs.

And then there’s the longstanding case study of the Central Park Conservancy, which has privately raised $470 million of the $600 million it has spent since its formation in 1980. Of the Conservancy’s approximate $42.4 million annual operating budget, 85 percent has been privately sourced.

This model has been copied elsewhere in the city, notably with the Prospect Park Alliance, the Friends of the Highline and the Open Space Alliance of North Brooklyn, which produced the hipster-friendly rock concerts held at a dry McCarren Park Pool during the 2008 season and has played a role in the pool and larger park’s fundraising. (This summer, OSA is planning a new concert venue atop a city-owned parking lot, a siting that would likely please Michael Kimmelman).

But a few primary concerns have emerged from the park system’s engagement with the private sector. One is that cities may get lazy about funding if philanthropy is footing the bill. And another is a matter of equity: “The more difficult question,” Alyson Beha, of the New Yorkers for Parks, told the Times, “is what about all these other parks that don’t have private money and are not located in wealthy neighborhoods?”

At a panel hosted by the Museum of the City of New York last year, Benepe defended creative financing: “People say, ‘Why should we self-sustain? The city government should pay for it. And you could say that’s a perfectly valid mission. Except the city government probably won’t pay for it. And you have a choice between doing something unusual — government-to-government partnerships, funding mechanisms, park improvement districts, special taxing districts, public-private partnerships — or not doing anything.”

He also acknowledged that neighborhood disparities impact the fiscal remedies: “It’s not one size fits all. People say, ‘Why can’t we have a Central Park Conservancy for every park?’ And the answer is you can’t, because we have this unusual concentration of very philanthropic people living in large numbers in tall buildings surrounding the park.”

California, which has the country’s second largest public park system behind Alaska, has recently staved off the closure of nearly 60 parks through fundraising, corporate partnerships, and planned corporate agreements, the first of which is with American Land & Leisure Co. regarding the operations of three state parks.

A troubling risk with privatization, particularly of the corporate variety, is that user fees might skyrocket to maximize profits. And in an age where a little exercise goes a long way to fight the obesity crisis, cities can’t afford to treat their parks as playgrounds for the rich.

Officials in New York seem to get this and located the city’s first “adult” playground in the Bronx, the poorest borough. Over the next 18 months, up to two dozen of these facilities will be rolled out throughout the city. This kind of thinking is a breath of fresh air in a public policy landscape that has tended to scold (think the soda ban) rather than divert pleasure-seekers.

At the McCarren Park Pool ribbon cutting, even Bloomberg resisted dampening the fun by mentioning the virtues of some time spent in the pool. But the thought is never far from the minds of those who confront the grim statistics on obesity each day. According to the New York City Department of Health & Mental Hygiene, nearly 40 percent of elementary and middle school children in the city are overweight or obese.

Labeling the pool “an antidote to the most serious epidemic of this era,” Karen Lee, the director of the Built Environment Program at the NYCDOHMH, underscored the importance of “providing fun, safe, accessible and affordable places for kids to be active.”

Those looking for design inspiration can check out the department’s guidelines for building healthier cities: Research is underway about the cost of implementing these strategies into the construction of affordable housing in New York City, San Antonio and Atlanta. Stay tuned for the results.