Activists Challenge Misconceptions on How to Build Youth-Friendly Cities 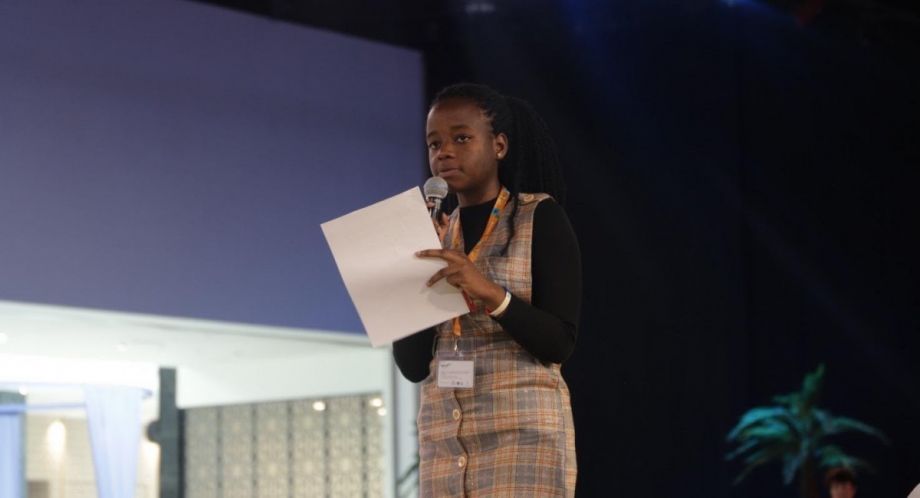 “Adults are not willing to offer leadership,” proclaimed fifteen-year-old Ugandan climate activist Leah Namugerwa, “so I offer myself.”

Too often, the preferences of young people living in Western nations are taken as representative of youth worldwide. News coverage claims the most important issues for young people are access to restaurants and nightlife, or the presence of a creative start-up ecosystem. But approximately 85 percent of people under age 30 live in so-called developing nations. On the first day of the World Urban Forum in Abu Dhabi, young people (defined by the UN as anyone under age 30) and their allies gathered at the Youth Assembly to demand substantive action on the UN’s Sustainable Development Goals. The assembly, co-organized by the UN Habitat Youth Unit and the UN Major Group for Children and Youth, featured numerous leaders who, like Leah, challenged misconceptions about what young people desire in a city.

The importance of educational opportunity, community participation and access to basic rights — what the young people in Abu Dhabi identified as what they want in cities — is reinforced by data provided by the United Nations and Brookings Institute. The UN estimates that more than half of the global population is under 30. Worldwide, there are 301 million children living on less than USD $1.90 per day. Projections show that, by 2030, 60 percent of city dwellers will be children. Spatial concentration and segregation in cities, particularly in informal settlements, disposes communities to the adverse effects of ongoing urbanization and climate change. As a disproportionately poor and urban population, young people are among the most vulnerable to the impacts of environmental crisis and increasing inequality.

While many of these issues appear daunting, there is hope. Young people around the world are organizing daily to address these challenges. In Sierra Leone, the local YMCA has partnered with Denmark-based Dreamtown NGO to construct a new public space in the Kissi slum of Freetown, where 65 percent of the population is young people. The space was developed through a six-month design competition that engaged more than 100 young people. One of the designers, 24-year-old Aminata Kamara, sees this new public space opening opportunities for peer-to-peer mentorship: “We go out there and talk to the young generation … to tell them about the essence of education.”

The new public space has allowed residents to challenge existing stigmas that characterize the young people of Kissi as disengaged and apathetic. “We have youth that are very smart in our country. Some people are entrepreneurs. Some people are innovators. But due to the lack of encouragement, some of them decide to stay back,” Conteh says. “We know if we start reshaping or reforming those people by giving them guidance and calling them on board, we can have a better society to live in. It is not as if everything is okay for us. No. We just believe that we must be the ones to stand; and we should help others to stand.”

Through the community organizing taking place in Kissi’s new public plaza, Kamara says, young people gain “the confidence to stand up so that, when they grow up, they will not be afraid to say what they have to say.”

Dreamtown NGO is also partnering with House of Arts Association in Zimbabwe, where young activists use art and music to encourage their peers to participate in the development of the Mbare slum.

“In Zimbabwe, it is more about a lack of information … rather than ignorance,” explains 24-year-old House of Arts leader Casper Chigama. “It is not that we don’t think much about development … we just do not know where to put our efforts … so we use art to attract [young people] then teach them to engage in the community … to engage in the politics.”

For many young people, the arts are a meeting point to engage in conversations about health, education, women’s rights and urban development. 28-year-old Tatenda Churu’s first exposure to House of Arts Association was through arts programming. “I am a testament to an invitation to an art event,” Churu says. “After I went to House of Arts, I began engaging other young people in my community… This led to us developing our own [programs and events for the organization]. From the grassroots, now we are somewhere better.” Through arts-based programming and the development of a new cultural center in the Mbare slum of Harare, House of Arts Association is working to “mobilize young people, change the negative narrative surrounding youth and slum communities, and gain support around their development priorities.”

These types of grassroots actions can be found in communities across the planet. In India, Youth for Unity and Voluntary Action is organizing advocacy groups to lobby for the development of safe and sustainable slum communities.

Marina Joseph, the 31-year-old associate director of YUVA, explains, “we create the platform where [young people] can come together… Once they feel a collective sense of growth, they begin organizing. They say we are not getting enough food subsidy from the food subsidy shop, so they organize a campaign to make sure the food subsidy shop owner gives what is due to all the families… or they see that water is such a big issue, every morning we are spending so much time as young people just fetching water, we are going to organize around that.” Last year, YUVA engaged more than 35,000 young people in 11 communities across India, helping families with everything from access to legal information, participatory urban planning service, and land tenure securitization.

Most recently, Joseph and her colleagues are supporting efforts to address gender inequities. “We are all coming together as young boys and girls, but there is so much harassment within the community. Girls just can’t walk on their own in a settlement. There’s always cat-calling, so they don’t feel safe,” Joseph says. “So how do they, between themselves, negotiate what gender equality means?” YUVA helps organize street plays which take gender as a central subject. “Some of the [plays] we see include boys who say, ‘you know, we used to cat call, we used to tease these girls, now we realize why we shouldn’t…’ and [these young boys] are the ones that tell others why this discrimination is so wrong.”

The Abu Dhabi Children and Youth Declaration - the product of youth engagement at this year’s World Urban Forum - calls for action on educational and employment opportunity, climate change, human rights and civic participation. In this Decade of Action, young people continue to take the lead on these issues in order to achieve the promise of the Sustainable Development Goals.

Carrick Reddin is a graduate student and independent consultant based in Paris, France. Initially trained in architecture, Carrick has worked with nonprofits, governments, foundations, and international organizations to support sustainable urban development activities.