A Victory for Tenants in Los Angeles County – Next City

A Victory for Tenants in Los Angeles County 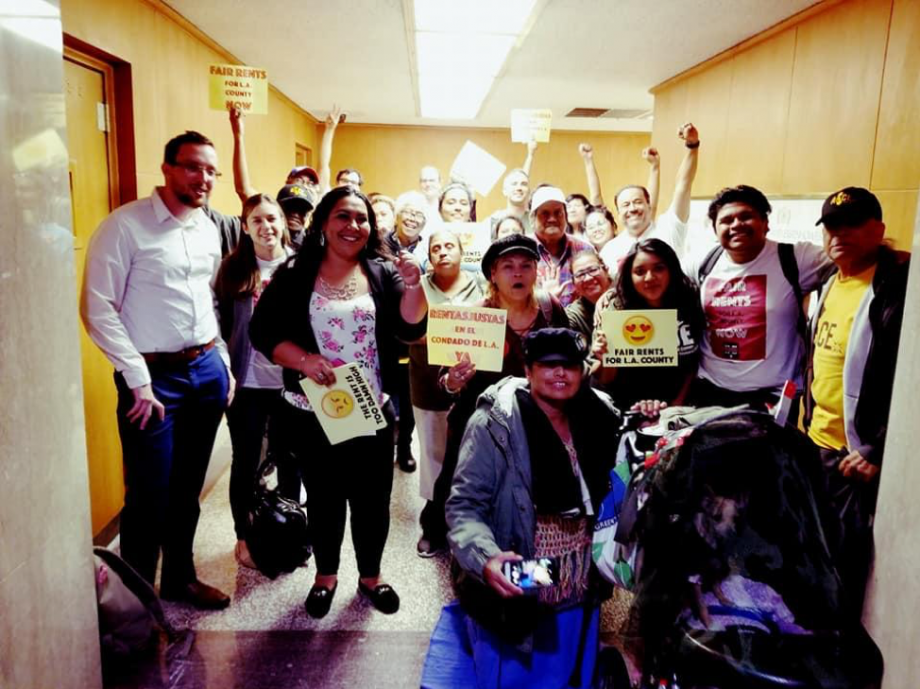 “Que queremos? Control de renta! Cuando lo queremos? Ahora!” (“What do we want? Rent control! When do we want it? Now!”)

Dozens of residents chanted what’s been a rallying cry for affordable housing this past year, as they took the steps of the Los Angeles County administration building just days after Proposition 10 — an initiative that would have made it easier for cities in California to enact rent control policies — failed to secure enough votes in the midterm elections.

This time residents demanded rent caps from their Los Angeles County Board of Supervisors. And they got it.

On Tuesday, Nov. 13, the board approved an ordinance, on a 4-1 vote, that offers eviction protections and temporary rent caps in unincorporated areas of L.A. County. Those areas include: Hacienda Heights, South Whittier, City Terrace, East Pasadena and South Central L.A. communities like Willowbrook and Florence-Firestone.

The ordinance places six-month moratoriums on evictions without a just cause as well as on rent increases that exceed three percent. County Supervisor Sheila Kuehl said an estimated 200,000 renters would be protected by the county ordinance, according to NBC Los Angeles.

It’s a move that’s taken months of advocacy and that surfaced on the heels of the failed rent control measure in the state. Many renters are happy about the measure, but developers and others are not. To housing advocates, it proves there is momentum for more tenant protections despite the failed Proposition 10.

“It shows us we can win renter protections,” says Dagan Bayliss, a director for SAJE, a nonprofit that advocates for tenants in South Central L.A.

The temporary ordinance passed more than a year after the board approved the formation of a working group to study policies in and outside California that address rental rates and building conditions. It’s meant to “address the threat of unreasonable rent adjustments” while the county works toward a permanent ordinance.

The rent caps also work within the confines of Costa-Hawkins Rental Housing Act, a state law that forbids cities from imposing rent control on single-family homes or apartments built after 1995, among other restrictions. (Proposition 10 would have repealed that law.)

At the Nov. 13 meeting, a number of tenants advocated in favor of the rent caps, while developers and others representing apartment associations and landlords spoke against such protections.

Janet Gagnon, representing the Apartment Association of Greater Los Angeles, said the ordinance would negatively affect the “mom and pop” landlords who “don’t have deep pockets like the corporations and the Wall Street investors.”

“They’re really afraid that they’re going to lose their buildings,” Gagnon said. “They can’t foresee urgent major repairs like a leak in the roof, the heater going out, a burst pipe … They need to be able to increase the rent when these issues come up.”

Christine Rangel, with the Building Industry Association of Southern California, said the ordinance could negatively impact housing affordability. She said it would reduce the housing supply “by making rental investments uncertain and financially unfeasible for landlords … It will likely push existing rental units into condo conversions for sale instead of rent.”

Tenants at the meeting shared their stories of struggle while renting in the county.

Diana Cruz, a lifelong tenant, said her family has been living in the area of Korea Town for the past 60 years. Cruz said her family is threatened by no-cause eviction. “We are facing displacement from the neighborhood we have known and loved for so long,” Cruz said. “We are not protected under any rent control at all. I understand there are protections in place for landowners and developers. Don’t we the people of the neighborhood deserve to be protected as well?”

Blanca Duenas couldn’t fight back tears as she told supervisors how difficult it was to make a living with a low income.

“We are decent people who always pay our rent on time and unfortunately the rich always keep getting richer and the poor keep getting poorer,” Duenas said. “We lost Proposition 10, but we didn’t lose the war.”