What’s Next for Tenant Advocates after Failed Rent Control Measure 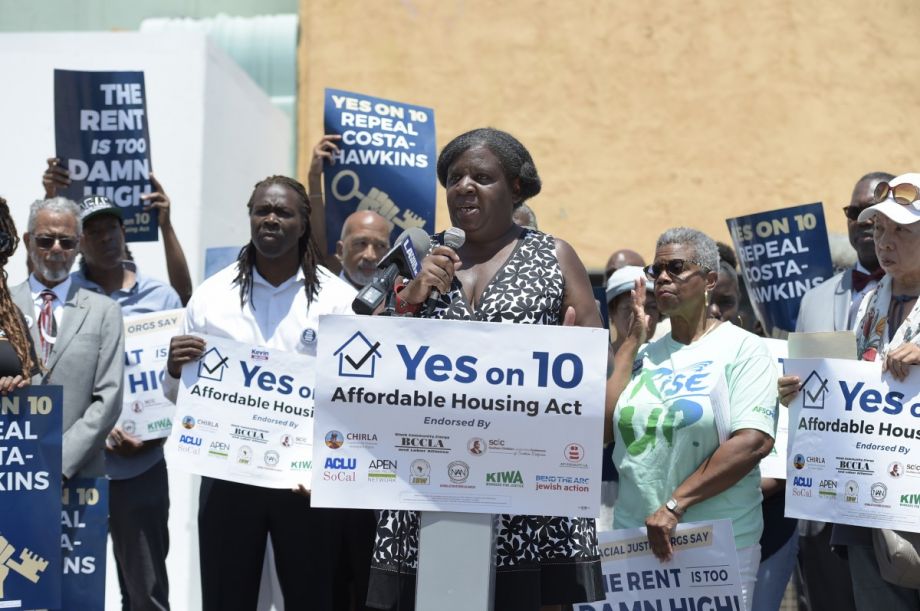 It was an unlikely scenario.

The call for affordable housing had come to Beverly Hills, where a group of mostly middle-class professionals in early October protested in front of a high-end Chinese restaurant owned by Vicky Mense, the same woman listed as a proprietor of their Silver Lake apartment complex.

“What do we want? No evictions! When do we want it? Now!” they shouted.

Protesters banged on drums, walked past luxury boutiques, and chanted “The rent is too high. Yes on 10!”

The high cost of living in Los Angeles has predominantly impacted Latinx working-class neighborhoods such as Highland Park and Boyle Heights. But it had reached the mostly white middle-class tenants of the Silver Lake complex and others in the neighborhood — a trendy community where “hipsterdom” flourished around the early 2000’s — who now found themselves protesting against monthly rent increases.

This was just one of many demonstrations taking place. In other parts of L.A., tenants were engaging in rent strikes, renters were staging faux homeless encampments to protest rent hikes, and housing advocates were showing up en masse to the homes elected officials who they felt were not addressing the issue.

Median rents in Los Angeles now stand at $1,367 for a one-bedroom apartment and $1,756 for a two-bedroom, according to a report from Apartment List.

There was enough momentum to suggest that Proposition 10, a hotly contested measure that would have made it easier for California cities to enact rent control policies, had a chance of passing in the midterm elections Nov. 6.

“It’s devastating,” says Brent Armendinger, an organizer with the LA Tenants Union. “And yet, we’re going to keep on fighting.”

The LA Tenants Union, which heavily advocated in favor of Proposition 10, has been a main driving force in organizing tenants across the city. The organization has helped renters form tenant associations, encouraging them to post fliers on their windows to protest rent hikes and living conditions in the complexes. LA Tenants Union organizers have also pushed landowners, in some cases through rent strikes, to negotiate fair leases and demand better living conditions.

At the heart of Proposition 10, was the repeal of the Costa-Hawkins Rental Housing Act, a state law passed 23 years ago that forbids cities from imposing rent control on single-family homes or apartments built after 1995, among other restrictions.

Groups turned in enough signatures to qualify Proposition 10 in the ballot after a bill that would have repealed Costa-Hawkins failed to go through a legislative committee in January this year.

Soon after, groups like the Democratic Socialists of America - Los Angeles, canvassed the neighborhoods in favor of the proposition.

Arielle Sallai, a spokeswoman with the Los Angeles chapter of the Democratic Socialists of America, says the Yes on 10 campaign was about “people versus money.”

“In a state as large as California, it’s a little hard to have the power to win against money,” Sallai says.

Millions of dollars were spent on the fight over Proposition 10. Opponents such as tax groups and apartment associations spent more than $76 million in advocating against the measure, while supporters, including the AIDS Healthcare Foundation, spent about $26 million in support of Proposition 10.

“The fact that we lost, I think just means that we didn’t have the capacity or the money to reach as many people that they did,” Sallai says.

The California Apartment Association, in a statement, celebrated the failed proposition that, if passed, would have “brought extreme forms of rent control back to the state.”

“The stunning margin of victory shows California voters clearly understood the negative impacts Prop 10 would have on the availability of affordable and middle-class housing in our state,” said Tom Bannon, chief executive officer of the California Apartment Association, in the statement.

“We will continue to be loud outside the offices of the elected officials that are doing nothing about this crisis and be as loud and vocal as we can to make sure that action happens,” Sallai says.

The LA Tenants Union in a statement said it will continue to fight against eviction and displacement and will renew its fight for reforms of the city’s housing department.

“We know the majority of Californians do support rent control, even if they did not understand — or were tricked into doubting — that Prop 10 was the first step to get it,” the LA Tenants Union said in the statement. “We have already proven so much with so little besides ourselves.”