A TOD Development for Camden? – Next City

A TOD Development for Camden? 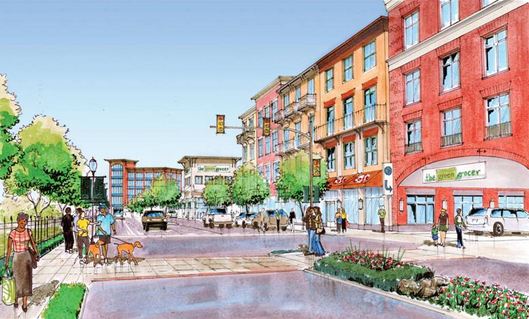 A rendering of the proposed design for the Haddon Avenue Transit Village in Camden. Credit: Cooper’s Ferry Partnership

In a one-two punch for the city of Camden, N.J., an upcoming transit-oriented development project is slated to develop land near a local train station and include complete streets upgrades that will add to the safety and prosperity of the area.

The Haddon Avenue Transit Village, a $100 million mixed-use development, will be built on 15 acres of underutilized land between the Our Lady of Lourdes Medical Center and the Ferry Avenue PATCO rail station, which transports riders to Philadelphia and southern New Jersey. The project will include retail, office space, several hundred housing units and a full-service grocery store. It is being spearheaded by Grapevine Development in partnership with the City of Camden, Camden County, Our Lady of Lourdes Medical Center, the Delaware River Port Authority (DRPA), and Cooper’s Ferry Partnership.

Construction on phase I of the project is expected to begin in 12-18 months and will include 115 housing units and 40,000 square feet of office space. Housing units will be market rate, but Our Lady of Lourdes Hospital, the project’s primary tenant, is considering offering incentives for employees that live where they work. While phase II has yet to be scheduled, it should bring an added 400 housing units, additional office and retail development, and a transit plaza that connects the PATCO station to Haddon Avenue, a major Camden thoroughfare.

In a move that seizes upon the connection between land use and transportation, the development will include pedestrian- and cyclist-friendly improvements to Haddon Avenue itself. Together with the project’s coordinators, the Delaware Valley Regional Planning Commission recently submitted a federal TIGER application that seeks funding for these upgrades, which include bike lanes, new traffic signals, crosswalks, ADA-accessible sidewalks and other traffic calming measures. This infrastructure will not only improve safety, but will also eventually connect directly to the area’s mixed-use trails (including the Camden Greenway), with the development serving as a hub in the greater regional trails network.

The Delaware River Port Authority has provided $1 million for the construction of roadway improvements and Cooper’s Ferry is seeking additional funding, ensuring that the project will move forward even if TIGER funds aren’t awarded.