A New Zoning Code, and a New Era for Urban Agriculture in Philly – Next City

A New Zoning Code, and a New Era for Urban Agriculture in Philly 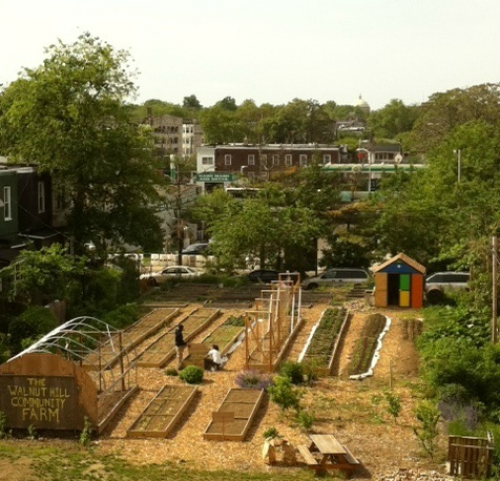 The quarter-acre urban farm and pocket park combo has an array of food-focused programming to empower youth from low-income neighborhoods. Student-workers can be seen carting their wares to market via the Market-Frankford elevated line, which not only runs above the farm but also provides water for irrigation via a solar powered stormwater collection system. Neighbors can join the kids, volunteers and farm manager in their own community plots. There’s a farm stand on site, and a community-supported agriculture program. It’s an altogether bucolic scene along one of the city’s busy commercial corridors.

It is also the scene of the interplay between urban agriculture and zoning. Until last August, urban agriculture — whether in the form of community gardens, farms, greenhouses or livestock — was not recognized as a land use by the Philadelphia City Planning Commission. The Garden Justice Legal Initiative conservatively estimates 350 community gardens or farms across 753 parcels, a figure that does not include the hundreds of backyard gardens. These numbers represent, again conservatively, agricultural production on land that is not owned by the cultivator. It includes the better-known farms like Weavers Way and Greensgrow, as well as numerous smaller community plots with no farm sales.

Before a new zoning code was rolled out this summer, most community gardens and farms in Philly flew under the Department of Licensing and Inspection’s (L&I) radar. It’s expensive and hard to convince the zoning board that what you do is legal if no category exists in which to fit the operation. Furthermore, the city has 40,000 vacant properties, a commitment to local food production and a busy L&I department. So far, L&I has not targeted community agriculture unless there were complaints.

The newly reformed zoning code now reflects the food production that has persisted for years by recognizing urban agriculture as its own use category, and allowing it in most residential and commercial districts. Walnut Hill Community Farm is going to be the first urban agriculture operation to test the new code. It put an application in to L&I the first day the new code came out.

As it turns out, recognizing urban agriculture as a use is helpful, but it doesn’t eliminate the need to navigate a complicated zoning process.

In short, the farm sits on seven commercial and residential parcels leased from SEPTA, Philly’s regional transit authority. It wants to add some infrastructure improvements — a retaining wall, a greenhouse, some park benches and lighting. Under the old code, the lots weren’t even legally recognized as a community farm. Under the new zoning code, not only is this use recognized, but it is also permitted on all of the parcels.

Seems like building permits should be easy, right? Not the case.

Accoring to Allison Blansfield, farm manager at The Enterprise Center, adding infrastructure to the farm would require either consolidation of the parcels, which would require SEPTA’s permission and a large amount of legal funds, or a “Unity of Use” permit — which, while not mentioned in the zoning code, is a departmental policy. The policy considers all the parcels as one unit with the more restrictive zoning applied to all lots.

“Unity of Use” at the Walnut Hill Farm means that all seven parcels would revert to residential zoning. The repercussion is that the 2-year-old farm stand that was built on a commercial lot would now be four feet too close to the property line. Therefore, the farm doesn’t have to convince the zoning board that it is a legitimate operation. Instead, it ends up having to go before the board to get a variance for the location of farm stand.

Recognizing urban agriculture as a legal land use category helps bolster support for its practice. Blansfield says that the real evidence that the zoning code works better is that more problems don’t come up. According to Amy Laura Cahn of the Public Interest Law Center, cultivated vacant parcels are no longer just vacant lots, but are now legally recognized as urban agriculture.

This represents a major shift in the dialogue on vacant lands. Cahn notes that on the whole, the new code is a very positive step, with details needing to be ironed out over the next year of implementation.

But of course, issues remain. As noted above, the zoning process is still clunky and expensive. The new code also requires users to register their parcels for a $125 per parcel fee. While Cahn recognizes that the fee will help the city map urban agriculture, and will bring the whole system above the radar, it may be prohibitively expensive for some operations. For instance, Walnut Hill would have to pay $875 to register their entire farm.

Finally, a large portion of the conversation may end up moot by amendments to the new code introduced by Councilmember Brian J. O’Neill. As it relates to urban agriculture, the changes would outlaw community gardening and urban farming in areas designated commercial mixed use, i.e. commercial corridors like Market Street where Walnut Hill Community Farm is located.

According to the Garden Justice Legal Initiative’s survey, this would jeopardize at least 20 percent of the already established operations, many of which have been in existence for decades. Those that had gotten a variance before the new code would be grandfathered in.

Those that hadn’t? Well, good luck. According to Cahn, one of the main reasons for the zoning code reform was to make the city less reliant on variances, so they are now extremely difficult to acquire. As of earlier this week, City Council’s Committee on Rules couldn’t come to a consensus regarding the amendments. The new code that had made it simpler for gardeners and farmers to be in compliance might now have the barriers built back in.