A New Park Built with a New Paradigm – Next City

A New Park Built with a New Paradigm 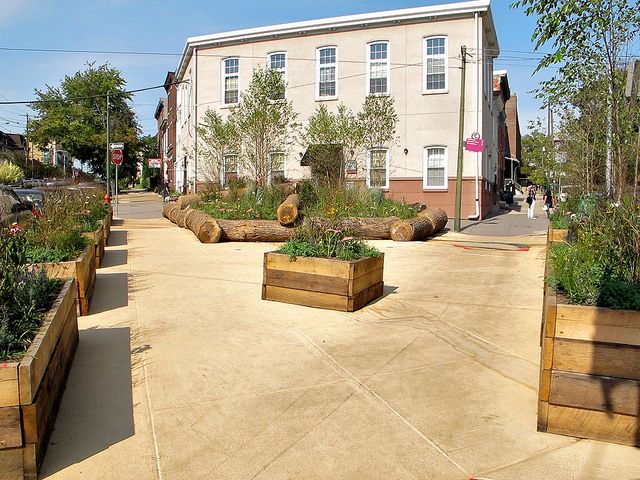 A new mini-park has popped up in West Philly, part of a trend citywide towards low-cost, collaborative neighborhood improvements. Photo credit: Alex Vuocolo/NAC

Native plants, river sands and a garden have collided at the corner of 42nd and Woodland Ave in West Philadelphia, transforming a formerly dreary traffic triangle into the neighborhood’s newest picnic spot.

Woodland Green Pedestrian Plaza, as the corner is now called, is the first completed project in the city’s Pedestrian Plaza Program, a collaboration between the Mayor’s Office of Transportation and Utilities, the Streets Department, University City District and the University of the Sciences, which will provide upkeep.

The plaza’s total price-tag of $50,000 was divided between the city, which contributed $30,000 and University City District, which covered the remaining $20,000. The goal of the program is to encourage economic activity in the area by bringing more people there to gather. By partnering with UCD and the university, the city was able to lower its costs while adding to its rather wanting portfolio of green space.

With an underutilized yet dangerous road segment and a large swath of impermeable asphalt and concrete, the corner was a strong candidate for the program, which also aims to use greenscaping to reduce storm water runoff and encourage walkability. “With Pedestrian Plazas and Parklets popping up across the city it is clear that there is demand for high quality, low-cost, pedestrian amenities,” said Mayor Michael Nutter.

This trend towards collaboration and compromise has so far yielded a number of beautiful public spaces in West Philadelphia. Going forward, the city and UCD will continue the Pedestrian Plaza Program with another plaza at 48th and Baltimore Ave. These collaborations with the Nutter administration are just the latest in a series of community projects on the district’s roster. In their capacity as a voluntary neighborhood improvement district, funded mostly by anchor institutions such Drexel University and University of Pennsylvania, the UCD has helped develop and fund numerous public spaces and community services. The Porch, which has transformed a concrete patch outside 30th Street Station into a popular meeting spot, exemplifies many of the same qualities as Woodland Green: abundant seating, greenery, and the potential for public events. Already, the Porch has sparked new economic activity as food trucks flock there for a lunchtime rush.

In the words of UCD Executive Director, Matt Bergheiser, they will continue to find “new possibilities in old familiar places,” whether in patches of concrete or in how organizations cooperate across the city.

Woodland Green includes a perimeter of rectangular planters made from reclaimed lumber and filled with native plant-life, movable seating and tables, and an immense three-tiered garden patch built from overlapping timbers taken from the nearby Woodland Cemetery. A mix of soils and river sands to facilitate water retention and drainage fills each planter in the plaza, said Peter Johnson, principal and partner at Think Green, the landscape architecture firm that designed the plaza.

The Porch was also a highly collaborative effort, drawing funding from a state transportation project to repair bridges around the station and working with the Streets Department and City Planning Commission. In abiding a strategy of incremental, low-cost improvements, collaboration between community groups and the city has become the new norm in Philadelphia for projects such as the Plaza and the Porch.

Even SEPTA was part of the collaboration on Woodland. Without its consent to divert a bus route, the Woodland plaza would have remained divided by a turning lane,
said Seth Budick, UCD’s manager of policy and research.

Reclaiming road segments for pedestrian use is often complicated in city as defined by its grid as Philadelphia. In the case of Woodland Ave and 42nd, the diagonal intersection presents a rare opportunity where a segment of road is under-utilized enough that traffic engineers are willing to concede space to pedestrian use, Budick added.

The degree of negotiation and compromise required by the project is even evident in the design of its largest planter, which was built to be completely dissembled and reassembled if broken utilities needed to reached beneath the plaza. The Porch too contains almost entirely removable parts.