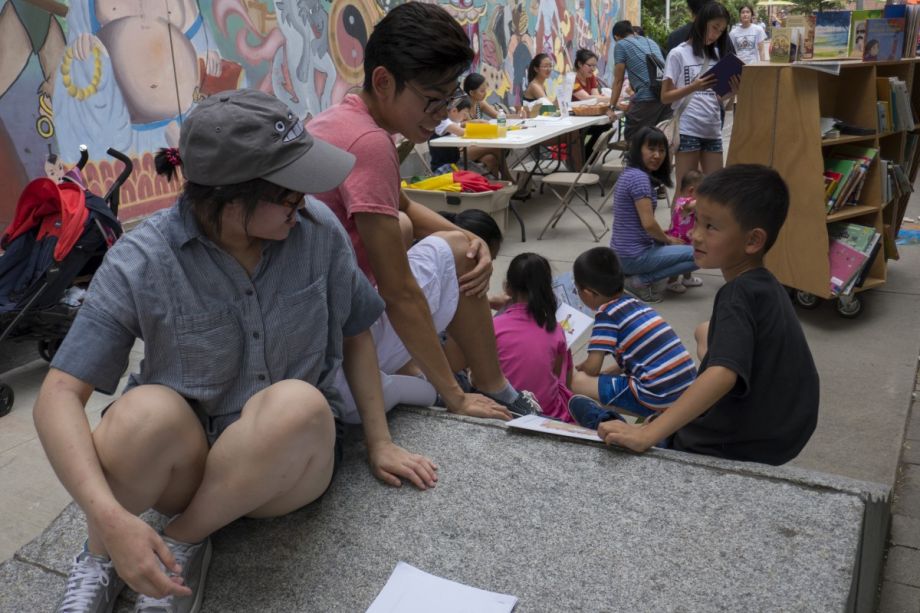 In Boston’s Chinatown, where historic row houses are bought up for use as short-term rentals and longtime residents are displaced as luxury downtown high-rises encroach, the Asian Community Development Corporation aims to bolster the neighborhood’s presence by enlivening micro-spaces along its edges and connecting newcomers with older residents.

“The new residents don’t have overlapping social circles,” says Jeena Hah, Asian CDC’s programs manager. “So we want to create projects to educate and make partners of the new residents. How do we preserve history while also welcoming — and shaping — change?”

Two miles away, the Roxbury Cultural District is working to steward the unique artistic and cultural fabric of two historically black neighborhood squares. With development heating up there, too, the fledgling organization has set its sights on negotiating community benefits agreements to ensure that with new development comes support for locally sourced public art and other cultural amenities.

These two organizations serve different neighborhoods, yet they have much in common, striving to strengthen their communities with vibrant public places. All around the Boston area, myriad groups — from nonprofits large and small to tactical urbanists, “friends of” groups, arts organizations and business improvement districts — are passionately working to protect and enhance local spaces, but often operating in separate silos.

Now, a new initiative of The Boston Foundation aims to forge a stronger network among Greater Boston’s place-based efforts.

The city of Boston isn’t known as a leader in public art, says Paul Grogan, president and CEO of The Boston Foundation. “There hasn’t been a well-understood process for siting and building it,” he says. And while the administration of Mayor Marty Walsh has pushed some creative initiatives, including an artist-in-residence program and plans to enliven City Hall Plaza, the city’s arts visioning process has had its “stumbles and bumbles” and has been criticized at times for leaving both its large, established arts institutions and its artists out of the process.

“We saw that there were a variety of groups focused on improving spaces, but they weren’t working together,” Grogan says. “There was a lot of fragmentation.”

Barash set out to tackle a broad question: “In this time of rapid real estate development and transformation of urban fabric,” he says, “what can we do with our [foundation] funds to influence the course of urban development with the public interest in mind?”

Familiar with a robust design discourse in Chicago — where, he says, local lore has it that “every cabbie knows every architect” — Barash wanted to spur something similar in Boston, which despite its well-known, massive arts institutions, he says, offers little in the way of “street-level” activity or connectivity.

“We thought, ‘Let’s give the money to those agents of urban change who are on the ground shaping shared places in their communities,’” he says. “So the next question was, who are those people?” From there, the Place Leadership Network took shape, with an application and selection process earlier this year that winnowed a field of 37 hopefuls down to the final eight.

“In forming this new network, we looked for an interesting mix,” Grogan says. “Part of the message is, everyone can own this.” Engaging a large number of diverse groups in one initiative is new for the 104-year-old community foundation, which more typically awards grants to individual organizations. “And it might not work, who knows?” Grogan says, “but that’s what foundations can do — try something and see if it works. If this works, it could bring a lot of change to the city.”

Asian CDC has been focused for some time on reclaiming and activating — “anchoring down” — spaces along the neighborhood’s borders. Through its ANCHOR initiative, efforts on its eastern edge include working with the Rose Kennedy Greenway Conservancy to activate Chinatown’s Mary Soo Hoo Park into a family play space with books, sidewalk chalk, and games; and working with Boston Chinatown Neighborhood Center Pao Arts Center to bring an interactive art installation to Hudson Street.

Now, Asian CDC’s Place Leadership Network team — comprising Hah, Jessica Wong Camhi, the Managing Director of the Chinese Historical Society of New England, and Warren Wong, a longtime Chinatown resident — wants to focus on the neighborhood’s northern border. The team plans to experiment with installations and activities that are scalable and could help preserve and even expand Chinatown’s footprint. Their initial target is a small, underutilized triangular plaza at Essex Street and Harrison Avenue that the city calls Phillips Square, in which some temporary murals already have been installed.

“It looks like a dead zone. It doesn’t feel like Chinatown at all,” says Hah. “But it was the origin of Boston’s Chinatown. We’re hoping to reclaim this area. We want to inject this border space with Chinatown stories.”

Hah also hopes that she and her team will learn from PLN peers facing gentrification and diverse populations. “Gentrification is happening all over, and I’d like to find out how other areas are engaging new residents,” she says. “And I’d love to learn how other organizations navigate the different voices and agendas of their neighborhoods. How do they create allies and build buy-in for a vision?”

For Roxbury Cultural District’s sole staff member, programs management consultant Anita Morson-Matra, the fellowship offers a chance to build capacity for her organization, which was formalized in 2017, and to lay a foundation for the long term.

“If we get training and have a bigger box of tools, we can push for transparency [in community benefits agreements], and also stay the course. How do we pass the baton? Someone else might pick up after I leave — so we want to be thinking about the long run, so we really get what was promised.”

Morson-Matra is keenly aware of the short-term urgency as well. “This type of support will really help us go farther, quicker. That’s what we need, with the current pace of development,” she says. “Once you remove the culture, it’s easy to rename a space and market it as something new. You can erase a people by erasing culture and art.”