A Blueprint for Equitable Parklets – Next City

A Blueprint for Equitable Parklets 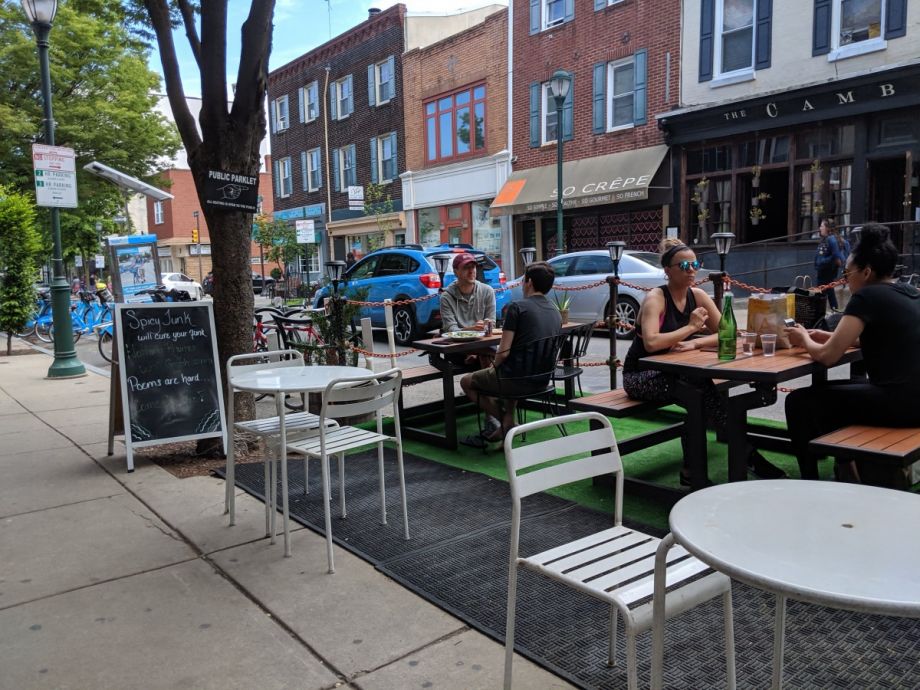 Just in time for PARK(ing) Day this Friday, Drexel University’s Lindy Institute for Urban Innovation has released a study that examines Philadelphia’s parklets (mini parks hosted in parking spaces typically reserved for cars) to discover what makes them sustainable over time.

In examining the various political, organizational and demographic factors associated with successful parklets, the team identified multiple barriers to success. They also looked to other cities’ successful parklet programs, like those in Seattle and San Francisco, to find ways to break down those barriers.

The result has been something of a blueprint for how to create an equitable urban parklet program.

One significant roadblock that the team uncovered is what residents described as the “inherently inequitable” nature of the city’s parklets, thanks in part to the current microgrant-based funding structure that the city deploys to support them, which has come with unintentional downsides.

“The inequity aspects came out in a lot of the interviews we did and the best practices that we investigated,” says Katrina Johnston-Zimmerman, a project manager and urban anthropologist at the Lindy Institute.

“When talking to residents in Philadelphia’s Chinatown, they found that the microgrant helped them to install parklets, but that it didn’t give them the ability [to fund continued] follow through, to provide programming, or make it bigger by adding more,” she says. “They have so many other concerns in their district that the parklet fell by the wayside.” Businesses with money (and incentive) can afford to keep a parklet funded over time, but community groups often struggle to find the necessary maintenance capital on their own.

Johnston-Zimmerman’s team found that the costs to establish parklets varies, but establishing and maintaining a parklet can cost up to tens of thousands of dollars, a cost that is prohibitive to many communities across Philly. Combine the cost with the grant requirements that stipulate that parklets must be created in high-traffic areas, and the result is a parklet program that’s most accessible to established businesses rather than community groups.

“The rules don’t say that you have to be a business owner to make a parklet. You could make one outside your house, but the difference is that it has to be in a high-traffic area and no one really has the excess capital or incentive [to make one],” Johnston-Zimmerman says. The report also found that many of Philly’s districts that have the least amount of green space, like Chinatown, are the ones least positioned to be able to take advantage of the microgrant program thanks to funding challenges.

Johnston-Zimmerman’s team also found that the insurance requirements associated with establishing parklets in Philadelphia has been a barrier as well. Because businesses almost always already have the correct type of insurance required for a parklet, they’re one big, complicated step ahead right out of the gate. However, “we found that people who had access to local insurance agents who are super friendly and amicable could say ‘Hey, I’m doing this. How does that work?’” were also well positioned to take on the program, Johnston-Zimmerman says.

As a result, the Lindy Institute came up with a few recommendations to address the equity issue in Philly’s parklet program.

First, they suggest having a staff member who is dedicated entirely to managing the program’s applications who can then also manage outreach. “They would have the time to coordinate applications and let people know about these programs so they can field additional applications that hopefully come in,” Johnston-Zimmerman says.

Next, the Lindy Institute team suggested Philly look to New York City, where pedestrian plazas have been created, in part, by the city finding locations that have a high level of both need and community participation. The city then offers to work with them to implement a pedestrian plaza based on the community’s ideas. The city then provides funding and the initial infrastructure. It’s the community’s job to steward the project and if it remains popular, the city then funds improvements for the plaza.

“What you get is a community-led project because the community knows what’s best,” Johnston-Zimmerman says, which can also help to mitigate gentrification issues that can be associated with green spaces — sometimes the first sign to long-time residents that the risk of eventually being priced out is circling their block.

Then, the team studied the parklet program in San Francisco. This program has been proliferating, but many of its parklets are sustained by tech industry businesses that focus on design elements sometimes more so than what community wants out of the parklet space. In contrast to many of the parklets in San Francisco, she explains that it’s important to listen to community members and to not create “high design” parklets if the community doesn’t want them.

In recognition of cash-strapped city budgets, Lindy didn’t recommend upping the budget of the microgrant program, but did suggest ways to lower the cost to potential parklet makers, such as offering a list of pre-approved designs that a community group could use instead of paying an architect, streamlining the application process and allowing parklets to remain year-round instead of requiring a group to pay to deconstruct and store materials during the winter.

“It comes down to access to quality public space and just access to people … the public space in your city that you can use to meet and connect with community members,” she says. “We’re dealing with rising rates of isolation and income gaps. Green space tends to be much smaller in certain areas of the cities compared to wealthier areas which contributes to heat island effects, air quality issues, and more.”

“Equitable green space is one of the best things we can do for our cities as we become urbanized.”