More to Learn from Las Vegas

More to Learn from Las Vegas

Las Vegas — the fastest growing city in America — keeps changing in the strangest ways, and every new move gives us so much more to learn from, or at least to think about.

These days it seems like a hack meme in writing about Las Vegas to invoke the title of Robert Venturi and Denise Scott-Brown’s (still great) book NAC stands for. The story is that an unused brownfield and former Union Pacific Railroad chemical waste dump located between downtown Las Vegas and the Vegas strip, the 61 acre patch of land known as Union Park is currently being converted into a master-planned, LEED certified, sustainability-centered “urban village.” High-density, mixed-income, mixed-use residence buildings are being combined with shops and offices, a casino, a celebrity-chef-helmed boutique hotel, a performing arts center and a Frank Gehry designed “brain research institute,” all in some kind of magnificent New Urbanist dreamland.

Here’s part of the groundbreaking ceremony: 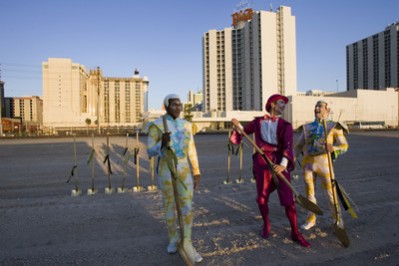 Those are Cirque du Soleil clowns.

It seems an odd tension of aesthetic sensibilities. On the one hand the project is every bit the Las Vegas of the collective imagination – a glittering, glamorous spectacular “brandscape.” It’s a downtown revitalization project of unprecedented ambition that seeks to build, from the ground up, a completely new downtown. On the other hand, the city and the project’s developers are everywhere making sure to advertise that the Park as “green,” sustainable, New Urbanist. To my mind these latter modes think of themselves as wholly unconcerned with the former’s flashiness, inherently.

From the looks of this article in the Las Vegas blog (by the same author, Steve Friess), Las Vegas is very consciously wrestling with this tension. Friess stresses that the city is selling its residents on the development as some kind of new, different Las Vegas, with different priorities than the Las Vegas of the past. A self-aware lack of “glitz and glamor” comes up in his writings more than once. But it is always with the kind of wink that suggests such a lack is actually the hook of the whole affair; a new face to the same old Las Vegas M.O. In a post entitled “This is How We Do It,” about the groundbreaking and accompanying “Union Park Martini Bash” he writes:
“Where the &$&@! were the showgirls? Man, they really DO want this Union Park thing to be respectable!”

And, again, anytime a new development is being anchored with a Frank Gehry, you can be sure that you’re dealing with some very self-conscious attempts at big-league urban branding.

So is Union Park actually getting it both ways, moral and marketable? Is the whole affair evidence that “getting it both ways” is possible; that there is nothing in Smart Growth that is constitutionally opposed to luxury? Or is the affair more melancholy? In a city known for attracting visitors with its facsimiles of landmarks of luxury from great cities past — from Venice’s canals to the New York skyline—- it’s hard not to see Union Park’s marketing as playing a similar game: declaring “greenness” and “smart growth” as the hallmarks of the 21st century city and adding them to its menagerie of ossified signs of faded urban ideals. Could Union Park’s marketing be a broader signal that we’ve already reached a point when “green” sensibilities have jumped from being merely accompanied by the air of conspicuous Neoliberal, bourgeois moralism, to being a hollowed-out luxury brand in themselves, offering a marketable pitch to investors wrapped in the flag of a once idealistic movement? 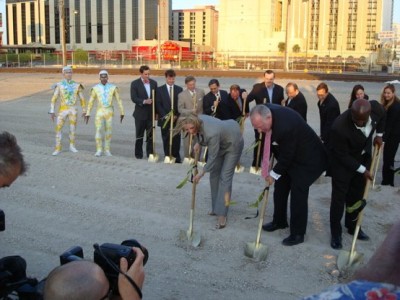 The answer is complicated, and looks to depend on the as-yet-unseen success of the project. To make things messier, the test Union Park will have to pass just got much harder: the original plans for the project were written up in a very different economy with a very different housing market. This story was played out in telling microcosm as I talk to Rita Brandin, Senior Vice President and Development Director of the project with Newland Communities, the contractors Vegas hired for the site. In her introductory description of the development she said things were looking “pretty good.” Later, when I asked about sales (none of the 3,200 planned residential facilities have begun building, much less selling) she was quick to backtrack, expressing nervousness about the current market. Brandin mentioned a new high-density residential project that has sprung up in the wake of the Union Park proposal, opening for sale soon, saying everyone would look to it as a trial run of the current urban housing market in Las Vegas.

It could also be looked at to see if high-density urban living can work as a solution to our current economic woes, or if it really is a mere good-natured pitch of luxury optimism that will falter in a time economic uncertainty and fear.

All in all, the project is a fascinating experiment that might help us answer some big questions. Is it a good thing that “smart growth” can so easily bleed into the realm of being a luxury brand? Is Union Park a perfect model for the way we can create moral markets and promote investment in better cities? Or is the project going to be a perfect parable for the tangled legacy of Neoliberal ethical, aesthetics, and economic ideals?

Vegas Doubles Down on Tesla Transit

CTA Red Line Riders Will “Ride with Pride” This Summer