While walking to work one morning last summer in Philadelphia, I spotted piles of freshly printed phonebooks sitting outside houses and apartment buildings across the city. Yellowbook had apparently just published a new version of their directory. I didn’t think much of it then, but I noticed that many of them were still lingering days and even weeks later, by then tattered and relegated to the unused space next to the stoop. Faded by the sun and soaked by the rain, the trim stacks had turned into sidewalk trash heaps. Literally. Unclaimed by their tenants, some landlords gave up and put entire piles of the books out with the garbage. It would be bad enough if this happened only once a year, but the books are being delivered yet again. Just yesterday, I saw dozens, if not hundreds, of directories on my way around the city, some of them already beginning their inevitable decay. 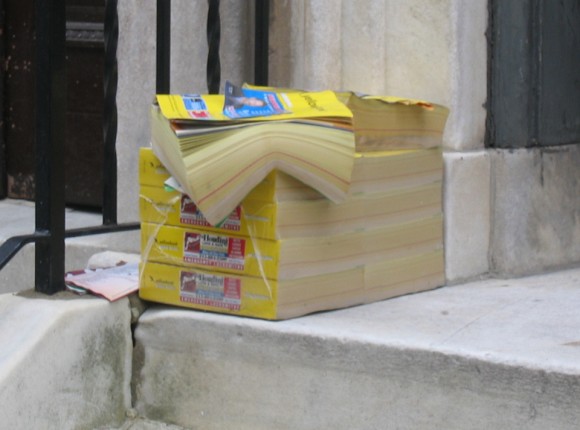 As residents of big cities, we must accept that streets will sometimes be dirty, that there will often be trash lying about. But it’s different when otherwise well-kept neighborhoods are deluged with unsolicited behemoths of paper multiple times a year. The free and automatic distribution of phonebooks is supposed to be a public service, but it’s actually a detriment to the appearance of our streets and to the environment. Apart from merely creating litter, printing so many books is hugely wasteful. The number of phonebooks delivered annually outnumbers the entire population of the U.S. by two to one. When more convenient, up-to-date, and paperless directory options are available online, we have to ask ourselves why so many phonebooks are still being printed.

Luckily, this problem hasn’t escaped notice by municipal and state governments. In 2008, Albany, N.Y. city councilman Joseph Igoe began a campaign to limit distribution of phonebooks from all publishers, and many states have introduced legislation to do the same. None have been successful so far, but the efforts have forced phonebook publishers to become more aware of the waste that they create. Telecommunications giant AT&T, for example, voluntarily began a pilot program this year to halt automatic delivery of its white-pages directory to all Charlotte, N.C.-area customers. They instead offer a CD-ROM version of the directory to those who request it.

AT&T’s move makes sense in this age of digital information and environmental awareness. It’s hard to imagine looking in a big, unwieldy directory for a good pizza place when you can much more quickly find this information online, and with full menus and customer reviews nonetheless. Hopefully the company will expand the program to cover a larger area. It will mean less trash on our streets and in our landfills. Until then, customers can call (800) 953-4400 to find out how to recycle their old directories.