The problem with last week’s G-20 summit wasn’t the actual agreement made between 20 masters of the universe in the confines of their virtual citadel, it was the citadel itself. Outside of the summit’s tranquil confines, riot police treated protesters of all stripes to attacks and confinement in the streets of London. 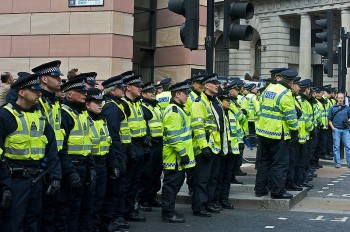 Police at the G-20 Summit in London. Image via Flickr.

The police call it “kettling,” forming a baton-laden ring around protesters and not letting anyone in or out. Police reportedly contained people for hours at a time, even bystanders including parents with children. When they were finally allowed to leave, they had to give the police their names, phone numbers and pictures, or else remain stuck. The police were also force-happy;The U.K.‘s Guardian reported that they cleared a peaceful group of environmentalists with dogs and batons.

I don’t intend to minimize the risks that police must prepare for in the midst of large crowds, but there are obvious problems here. Authorities in London clearly failed to distinguish between peaceful and potentially dangerous groups. They defenestrated the civil liberties concerns that come with restricting people’s freedom of movement and their right to occupy public space. And then there’s the question of whether this kind of shock-and-awe approach to crowd control prevents or provokes violence. By the end of the summit, the police had replaced bankers as bogeymen.

But there are more profound issues here. Whether it serves a purpose or not, cloistering our leaders behind barricades and armed police is anathema to the democratic values of public discourse, transparency and openness. When it comes to economic matters, the elite consensus is that the public should stay the hell out of it and let the experts run things. That’s why economic summits tend to be especially well cordoned off. The powers-that-be apparently learned this in Seattle after riots broke loose outside the 1999 World Trade Organization summit. It’s no surprise that the next big WTO meeting took place in Doha, Qatar, where “another Seattle” would be a non-starter.

Of course not every major summit can be held in an autocracy. The solution then is to take an otherwise open city and garrison it. Over the past week we saw this in London and we saw it again in preparation for last week’s NATO summit in Strasbourg, France. These shows of overwhelming force that host cities display are ostensibly to deter any groups thinking of violence. They also send a bigger message to anyone who considers showing up to speak their mind to the world’s most powerful people: Stay home.

How Can ‘Sponge Cities’ Use Nature to Tackle Climate-Fuelled Floods?

Fare Caps Might Get Transit Out of the Pandemic Slump