Yes, Los Angeles has a subway system – now it will have turnstiles, too.

Freeloading subway riders may soon be handing over dough to the Los Angeles Metropolitan Transit Authority. That’s because this summer, Metro is trying out shiny new turnstiles and protective gates along the Red and Purple subway lines that serve the dense neighborhoods of Hollywood, Koreatown, and Downtown LA. 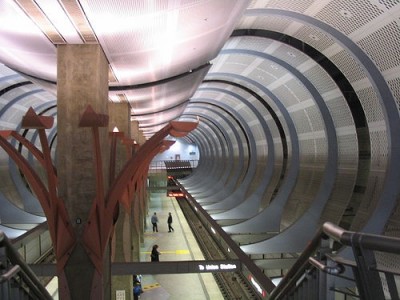 Initially considered too costly to install given projected ridership numbers, subway turnstiles are absent from Los Angeles subway stations. In fact, LA Metro is the only major transit agency in the U.S. that doesn’t use subway turnstiles and security gates. This means that riders can, and do, waltz through stations without paying, undeterred by intermittent ticket checks and fines that run up to $250. As it turns out, more and more Angelenos are using the subway and those unpaid train tickets are adding up. Metro estimates that fare-evaders cost the system $5 million a year in lost revenue.

In November 2007, Metro board members voted 11-1 to toughen up security by installing 379 turnstiles in subway stations, and this summer they are taking the steps to make it happen. Union Station, the transit hub of Los Angeles, and Wilshire-Normandie are the first two station areas to try out the new turnstiles; more will be installed at the Pershing Square and MacArthur Park stations throughout August. If the system seems to work by the end of September, Metro will go ahead with its $46 million plan to install hundreds of new turnstiles and security fences throughout LA.

The expected benefits of turnstiles are twofold: a reduction in numbers of ticket-dodgers and improvements in security. In fact, the California Governor’s Office of Homeland Security is helping to pay for the turnstiles with a $16 million grant to reduce the threat of terrorism.

The turnstiles still need to be fine-tuned. They only accept monthly passes, not single-ride tickets. Riders will have to show these to a Metro official standing next to the turnstiles until compatible single-ride tickets are introduced. Also, installing security gates at select stations rather than all at once county-wide means that there will be gaps in the system where non-paying riders can enter.

The subway turnstiles signify an important shift in the way Angelenos travel and indicate a growing emphasis by state, county, and local agencies on transit. In a region known for its car-dependent populations and highway-gridlock, people are turning to alternative forms of transportation to get them from point A to B. And by making patrons pay to enter the subway, LA Metro is getting serious about developing the County’s transit infrastructure.