The award ceremony for the 3rd Annual Ed Bacon Student Design Competition were handed out to teams of young urban planners last night, and focusing on food seemed to be the way to get the prize money. The winning entries after the jump.

Ed Bacon, a.k.a. the “Father of Modern Philadelphia” a.k.a. the “Father of Kevin Bacon” a.k.a. “Not-Racist Robert Moses,” started an urban planning foundation in his own name a year before his death in 2005. It continues to do good work for Philadelphia and the field of urban planning, and last night’s award ceremony for “Rebuild/Revive,” the third annual Ed Bacon Student Competition, was a nice reminder of all that. Prizes were handed out to teams of student planners from the area for their re-designs of the Ludlow neighborhood, an area of Philly currently known for high crime rates and a proliferation of vacant lots. 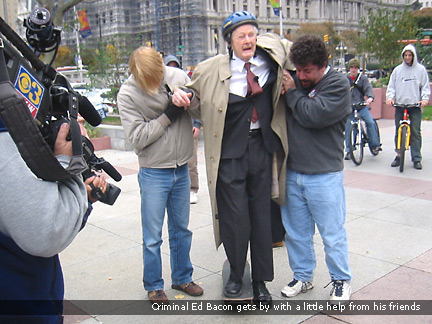 Ed Bacon in 2002, skateboarding in LOVES Park to protest the skating ban in the space he designed 70 years earlier

The winners of the competition’s top prize, graduate planning students from UPenn, proposed the unused lots and the transient population of the area (there is a 4:1 rental to ownership ratio in the neighborhood) be dealt with in one zeitgeist-y move: fill the empty space with urban farms and encourage local residents to work there. You can see .pdfs of their plan here, and read an interview with the team here. 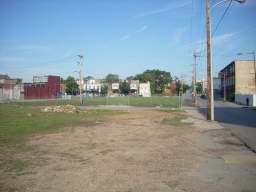 The Ludlow neighborhood as it exists today

Ideas from the second place team included an “Art Walk” to encourage local culture and walkability, stronger police presence and better outdoor lighting. Third place went to another plan for urban farms, though this one also included a complimentary restaurant district to make use of the locally grown food and create a little self-sustaining economy of food.

Funny that Bacon, and icon of mid-Century Modernist urban planning, is now inspiring so many farms.

A full list of winners and their projects is can be found here.

I've always loved to read Next City's coverage of global solutions to urban issues. It's surprising how often solutions to everything from micro-mobility to pollution, from as far and wide as Syria and Singapore, can help us rethink our own approaches to these universal issues.