Jeremy Rosenberg looks again at signage — and how in certain cases, these texts plus graphics can operate at or near the intersection of art, advocacy, commerce, and public service.

Each of the past two weeks, City / Culture has discussed signage – and how at least in certain cases, these texts plus graphics can operate at or near the intersection of art, advocacy, commerce, and public service. As last week’s post re-capped:

“Furtive bicyclist advocates post the same message in secret that the Chief of Police delivers to the world. A guerilla artist makes a sign that becomes an accepted Freeway infrastructure improvement. Another group imagines, in public, a rail line that then starts to come true. And a performance artist and poet re-conjures a once mighty river, and years later, elected officials all fall in line.”

This week, we move along to Ari Kletzky’s Islands of LA project. During autumn, 2007, official-looking brown signs started to appear in traffic islands throughout Los Angeles. The signs read, “Islands of LA Nat’l Park” and listed the organization’s web address. 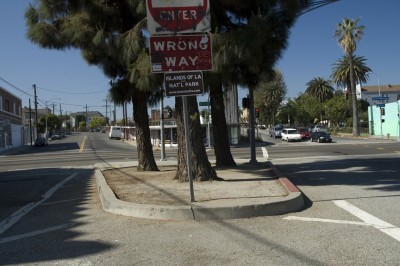 These signs closely, and intentionally, resemble the federal government’s national park signage. (Here, for example, is a marker for Death Valley National Park.) In Los Angeles – and likely wherever you’re reading this, except maybe Barcelona’s Las Ramblas – traffic islands aren’t generally considered in the same conversation as, say, The Joshua Tree National Park, or the Grand Canyon National park.

Traffic islands are, instead, often overlooked and ever-neglected patches of land and dirtscape that separate north- and southbound, or east- and westbound traffic lanes. In Los Angeles, sometimes these usually thin strips house election campaign signs. Sometimes, a hubcap or other car trouble detritus. Other times, islands host a man selling bags of fruit or bottles of water. And sometimes, a man or woman, holding a different sort of sign, handwritten marker on cardboard, begging for spare change.

Thanks to Kletzky’s project, traffic islands in the City of Angeles gained more attention. The Los Angeles Times published this feature. Speaking invitations were offered and accepted. Kletzky’s act of naming something, it seemed, created something.


“Everywhere there are islands hidden in plain view. Surrounded by road, archives of the in-between, traffic islands are a vehicle to investigate and interact with an urban landscape marked by transportation and neighborhood, public and private, urban and nature. Many are picturesque panoramas or concrete shapes to be appreciated from the car or sidewalk, while countless other ones are gems of publicly owned space. These are islands where you can enjoy a picnic, spend an afternoon painting, protest, serenade a lover at midnight, raise money, hold a small event or otherwise share your thoughts with the bustle of undifferentiated humanity humming along the way.”

Kletzky was a CalArts grad student during the first years of the Islands project. He also put together this related work, The Blue Line.

The Los Angeles-based curatorial and art-making (and writing) duo known as Owen Driggs have over the years worked with Kletzky – including Islands of LA, for instance, in this exhibition in Tijuana, Mexico.

Felipe Zuniga was another artist in that Owens Driggs curated show. Working under the moniker, Performing Public Spaces Presents…, the Owens Driggs duo has since invited Zuniga to Los Angeles. “[Zuniga] developed a project that he’ll do with sign-spinners,” says Janet Owen Driggs, half the duo along with Matt Driggs. (Disclosure: Both are friends and former colleagues of the City / Culture columnist.) “Apparently the sign-spinning oeuvre is exclusive to Southern California,” Janet Owen Driggs says.

For the unfamiliar, she’s referring to the usually young men and occasional young women who serve as paid twirlers, attention grabbers who stand at roadsides, iPod buds in ears, gum often snapping in mouth, holding and then rotating, revolving, tossing, and otherwise animating commercial cardboard advertisements for open houses or discounted pizza pies or the like. A particularly skilled sign-spinner is like an And1 street baller of sales.

“[Zuniga] has invited a number of artists to create poetic language for the sign that would add meaning to the twirling,” Owen Driggs says. “We’re going to hire sign-spinners, and we’re going to have a day of sign-spinning poetry in Los Angeles.”

And two months after that, Los Angeles’ most famous mark made headlines. Thanks to a $900,000 eleventh-hour donation by Playboy founder Hugh Hefner, the land immediately adjacent to the “Hollywood” sign was purchased by the conservationist group Trust for Public Land. Today the sign is regarded by many as a civic treasure, and the name it spells is synonymous with creative industry. But back when it was erected, in 1923, the sign read in full, “Hollywoodland,” its large white letters thrown up by developers in order hype a new neighborhood.

Does that transformation qualify as a slow-burn culture jam? Or is the sign’s popularity more of a nostalgic paean or entertainment industry yearning? And more importantly, any chance that Playboy’s competitors step up and donate money to conserve traffic islands?