An uproar over a statue of the 1970s TV icon says more about its city than any piece of public art could.

We all want great public art in our cities. But we rarely seem to get it.

Art is a transaction between artist and viewer, the interplay of the artist’s vision and the viewer’s perception; in the realm of public art this delicate transaction is often thrown off by the usual Public Art Process, which usually entails an “arts board” charged with codifying and enforcing public tastes. What so often results is art that is trying to be all things to all people, and ends up being nothing to no one — a curiosity that you’re left to try to “explain” to out of town visitors, or, perhaps worse, a permanent part of the “wallpaper” of the cityscape, a fixture so banal as to merit no more mention than a mailbox or a lamp post.

For every great work of public art, a Picasso in Daley Plaza (which, incidentally, was panned when it was first unveiled), there are countless monstrosities like the huge vertical stack of faux footballs standing outside Camp Randall stadium in Madison, Wisconsin: 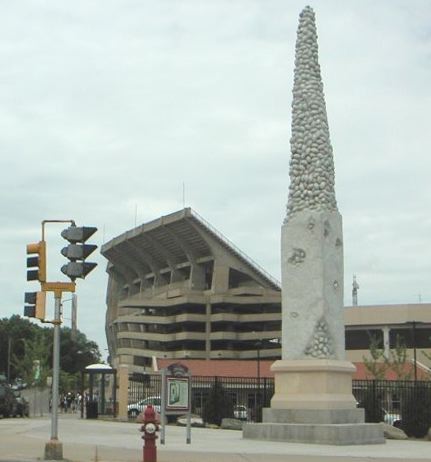 The artist behind this piece may have been trying to convey something, but clearly the Public Art Process degraded the original vision to the point of nonrecognition.

The sorry state of so much public art begs the question: who decides what is “good?” And why did they get to decide? Is there room for public art that is merely there as decoration, or entertainment?

Every cityscape in America is dotted with public art that doesn’t “say” much: the ubiquitous statues of famous people, the Lincolns, Washingtons and Kings that stand in nearly every Northern city in the United States. The message these statues convey is fairly simple; they honor the people they represent. Milwaukee pays statuary homage to Lincoln, Washington and King, of course, but also Ghandi, Hank Aaron, Frederick von Stueben, Johann Goethe, Cashmir Pulaski, and, one of my personal favorites, three unnamed ironworkers.

This summer, a new name will be added to Milwaukee’s illustrious roster of statuary: Arthur Fonzarelli, most commonly known as “the Fonz.” When it was announced that Downtown Milwaukee would soon be home to a privately funded statue honoring the Coolest Person Ever, far cooler than the Bob Newhart statue in Chicago or the Mary Tyler Moore statue in Minneapolis, the local arts community had a fit. They fretted about what the statue would “say,” what message it would convey about our city. One prominent local gallery owner, complaining that the Fonz statue would rehash old stereotypes of the city as a beer and brats, Laverne and Shirley, Lenny and Squiggy kind of town, threatened to close his gallery if the statue was approved.

The director of the Milwaukee Art Museum even got involved, insisting that the statue not reside at its intended spot, a prominent Downtown intersection which is slated for a major, “legitimate” public art installation. From the looks of the artist selected for this upcoming “non Fonz” installation, this piece might indeed turn out to be one of those public art pieces that works. The siting of the Fonzie statue was therefore moved, as a compromise, to a spot a little more off the beaten path, where tourists who want to bask in its Cool presence will have to spend a little time trying to find it.

What will the Fonzie statue “say?” There are those who think it will say that Milwaukee is the kind of town that is so deluded as to lionize a fictional character from a stupid ’70s TV show. I think that it’s not really going to say much of anything, beyond, perhaps, “aaaaaaay!”

Given the visual litter that has too often resulted from the usual Public Art Process, I think there are far worse things for a work of public art to say. The Bronz Fonz will not be great public art. But it won’t be a giant, phallic stack of footballs, either. It will be simply a whimsical tourist attraction that will introduce future generations to the Greatness and Coolness of the Fonz, and might bring a few more visitors Downtown.

The Bronze Fonz on its own won’t be art that “says” anything meaningful, but the uproar over this innocent little statue has said more about Milwaukee than I think anyone intended.