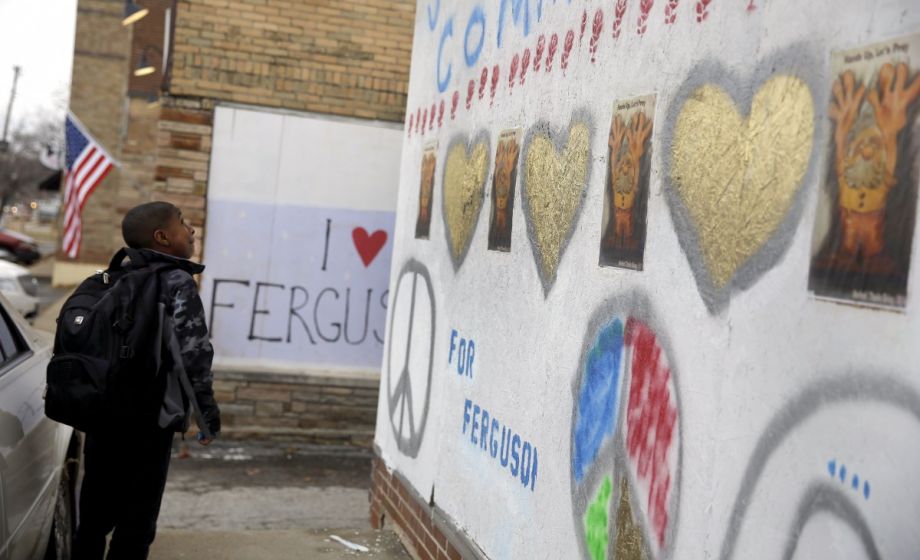 A 10-year-old in Ferguson, Missouri, looks at messages on a boarded-up business. (AP Photo/Jeff Roberson)

Last year, the tumult in Ferguson tuned America into injustice and inequality that persistently affects people of color nationwide.

Now, 2015 presents a test for social justice organizations, which must figure out how to keep the issues of police brutality and economic inequality part of the national conversation. If they can’t, demands for change may slowly be drowned out as the news cycle latches onto the next trending controversy.

The Funders’ Collaborative on Youth Organizing (FCYO), a group that supports organizing as a strategy for youth development and social transformation, want to make sure young people have the opportunity to create lasting change. From their “Youth on the Move” essay:

This is a clear moment when young people of color are ready to organize. It is essential that there are structures to support their ongoing engagement and the growth of their power (research has shown that young people of color are eager to engage in solving issues in their communities, but that the challenge has been the lack of opportunity to do so). The effective support of youth organizing requires an understanding of the diversity of the youth organizing forms that have developed and the different kinds of support needed by each. Of particular importance is how to support both the new organizational forms that have developed out of this moment and require new kinds of support, as well as the established youth organizing groups that play fundamental roles in sustaining this movement.

St. Louis-based Organization for Black Struggle is taking up the challenge of building new leadership — on terms set by young people themselves — through the Next Revolution Fellowship program.

Starting next week, the 15 fellows selected for the first round will be learning organization and campaign-building skills over the course of five weeks. At the end of the program, each will receive $1,000 to start their own organization or project.

One of the unique facets of the program is that it doesn’t require participants to do work that supports OBS’ existing projects and campaigns. It acknowledges that this new movement requires new voices and new spaces.

“Part of what we saw,” says OBS Chairman Montague Simmons, “was there were people who did not want to be a part of OBS, but they wanted to, if not protest, find other space to be an activist on the ground.”

“While we know we have a responsibility in this space to bring clarity about the changes that we’re fighting for, we also have to find space to nurture other actors who want to be active either as organizers and movement leaders,” says Simmons. “We don’t want to just give a job to someone and tell them, ‘Go do this.’ We want to create space for agency.”

Critics of Occupy Wall Street often point out that the lack of concrete demands and focus doomed the movement to fail to create lasting change. The Next Revolution Fellowship program is an example of an effort that insulates against the capriciousness of what FCYO calls “movement movements” by creating a strong bond between an older Black Liberation framework and the vigor and motivation of young people.

Simmons says he was inspired by the eagerness of the applicants to the fellowship program — and that it is an unprecedented moment in the 35-year history of the organization.

“There is a dominant trend right now both within government and in the media, where there are people who would rather just see [the issues surrounding the Ferguson crisis] go away,” says Simmons. “Part of what’s unusual about this moment … is that there’s a population I’ve never seen be so unwilling to let an issue die. People are constantly coming up with new ideas to make sure that some of this energy stays alive.”