In a Male-Dominated Food World, Women of Color Are Creating Spaces for Each Other – Next City

In a Male-Dominated Food World, Women of Color Are Creating Spaces for Each Other 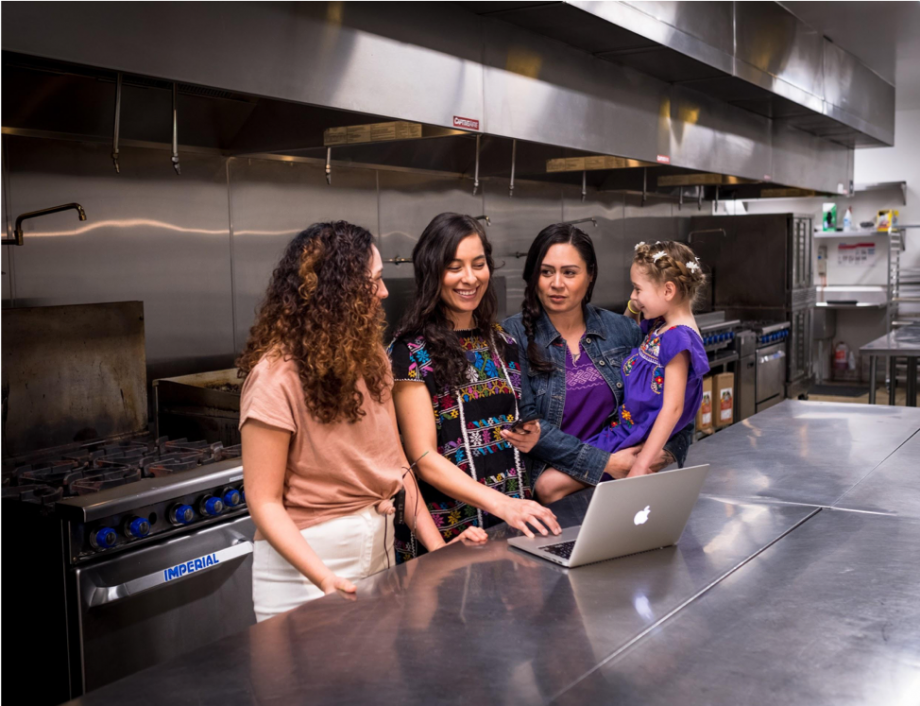 With a background in animation, Christiana Cunanan saw the value in storytelling through camera work, stop-motion and the editing process.

Being around the creative film process, she recognized the importance of documenting her own Filipino heritage. But she didn’t do it through film; instead, she did so with food.

Cunanan first explored using sweet Filipino flavors in the form of doughnuts but it wasn’t the right fit. She focused on making vegan ice cream, using fruits her grandfather introduced to her, like Calamansi, a cross between a mandarin and lime that grows in the Philippines.

She dove into the food world without any kind of formal training or experience. She sought mentors, reaching out to more than 40 chefs and food creatives in and outside Los Angeles, some whom she read about in the media. She didn’t hear back from most of them. Weeks later, only two replied. She was disheartened.

“I couldn’t find a community within the food space. I’m very much the kind that if you are excited and love something, you should share it and not become territorial,” says Cunanan, 26, of Pasadena.

In recent years, food businesses have been thriving so much they’ve been seen by some as “a new path to prosperity for kids of immigrants.” Women of color, however, are often left out of the industry, making it hard for food creatives like Cunanan to find a community on whom they can rely. Women of color are underrepresented up and down the food industry pipeline, from entry-level to chief executive roles, according to “Women in the food industry” a 2017 report by the consulting firm McKinsey & Company.

A 2017 Eater article highlighted the disparity in the number of women chefs featured in prominent media, in food industry conferences, and in food festivals across the nation. At the Los Angeles Food and Wine Festival, for example, there had been no progress since 2013 in the number of women chefs who took part in the event, according to the article. Women made up about 17 percent of chefs featured at the festival in 2013. That number remained relatively unchanged four years later in 2017.

The situation seems dire, but networks and coalitions of women in the industry are banding together to combat the inequality across the nation.

Bestselling cookbook author Julia Turshen this year launched Equity at the Table, a searchable directory of women chefs, caterers, recipe writes, and food event producers. The Parabere Forum was founded in 2015 and features a database listing more than 5,000 women chefs and sommelières, female food producers, scientists, anthropologists, and innovators across the world.

And in Los Angeles, a women-of-color led group known as Across Our Kitchen Tables is helping women of color in the food industry connect and exchange ideas with one another. The group is funded through grants, hosting skill shares about recipe development, food photography, and plating. They’ve held workshops on branding, marketing, and social media.

Valeria Velazquez Duenas, a co-founder of Across Our Kitchen Tables, said the food world relies too heavily on celebrity culture.

“Who is highlighted in that world and what we focus our attention on (is) sort of this celebrity chef culture or the so-called foodie culture,” says Duenas, who created her own private chef and catering project Cocina House. “We’re aiming to uplift the work of women of color in all ranges.”

Duenas said the group wants to help women of color — who may not have entered the industry with previous fine dining experience — figure out what segment of the industry they want to be involved in, whether it’s hosting culturally-based food workshops, writing a recipe book, or opening a brick-and-mortar or a catering business.

“It doesn’t have to look just like one model,” Duenas says.

For Jocelyn Ramirez, another co-founder and a vegan chef, opening her own restaurant was always the goal. She worked on a business plan for a year to help sustain herself when she left her full-time job in education. She named her plant food-based venture Todo Verde and started off small by making smoothies and aguas frescas at farmers markets. The first year was about becoming visible. Her brand took off and she expanded to catering with full dishes like mushroom mole, jackfruit fajitas, and palm ceviche.

There were obstacles starting off, like having enough collateral to secure a loan or knowing where to go for insurance. Ramirez took up consulting work to make ends meet at the beginning.

Ramirez also launched a crowdfunding campaign in hopes of raising $50,000 to open a Todo Verde brick-and-mortar in a part of L.A. that doesn’t have many healthy food options.

To Ramirez, these are all experiences she will share with the Across Our Kitchen Tables network.

For Cunanan, becoming involved with the group has helped combat the feeling of illegitimacy in a male-dominated space. Her ice cream business, Cheeri Cheeri, has taken off in the form of pop-up events in cafes in Los Angeles. She doesn’t want to open an ice cream shop but plans on distributing her flavors worldwide.

Now, feels she has a community behind her.

“I no longer have to be fearful if I was enough in terms of having enough coverage in the press or social media followers, none of that mattered anymore,” Cunanan says. “I’m in a space and I’m creating in that space.”