Turning a “Tired” Passageway Into a Pocket Park – Next City

Turning a “Tired” Passageway Into a Pocket Park 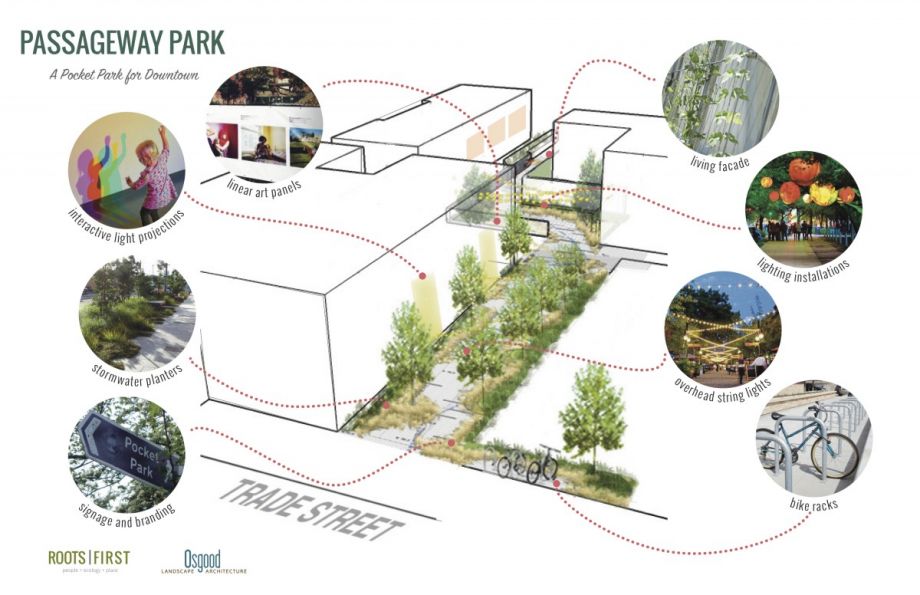 Winston-Salem, North Carolina, is hoping that the second time’s the charm, at least for a little sidewalk slated to be upgraded.

“Passageway Park” would be a revamping of a 1970s-era walkway that has fallen into disuse. The Downtown Winston-Salem Partnership is planning to upgrade lighting and landscaping and add “passive” programming to turn an important downtown connector back into the space it should be.

In the 1970s, the city flattened blocks of downtown in the name of “urban renewal.” It closed streets to traffic and built a series of pedestrian walkways to connect them. The walkway now known as Passageway Park, connecting the city’s Trade Street to Cherry Street, was one of them.

Almost from the start the project was a failure. “It was a Hail Mary,” Kristen Haaf, an environmental designer working on the redesign of Passageway Park, says. “Something like two or three years later, the big mall went in in the suburbs.” The street the city had closed to traffic withered. Just a few years after city boosters put out a video touting the new and improved downtown, downtown was a ghost town.

The particular walkway in question also was built with some questionable design choices. “There are buildings that surround it, but no windows,” Haaf says. And right in the middle there are two 90-degree turns, effectively cutting off visibility for anyone walking through.

People still use the passageway as a shortcut, as it was designed to be, but it’s not a welcoming space. “It is tired, and in need of a facelift,” says Jason Thiel, director of the Downtown Winston-Salem Partnership, the downtown BID.

But now, like many U.S. cities, Winston-Salem is experiencing downtown revitalization. Job growth is up and the city’s population grew by 40,000 (23 percent) from 2000 to 2010. And the passageway is right in front of a major hotel and the city’s transit center, a prime location. So the BID thinks it’s time to give it another shot.

When Haaf was engaged by the Downtown Winston-Salem Partnership, one of the first things her firm, Roots First, did was spend time sitting in the space.

“We were surprised at how many people were using the space,” she says. “However, it was almost all men, and I think that’s kind of telling.”

Haaf says that the downtown partnership has asked her and Osgood Landscape Architecture to rethink the space, but in a modest way (the budget for the project is capped at $150,000). “I don’t think anybody’s arguing that this has to be a shiny, high-dollar space, but people should at least be comfortable there,” she explains.

Plans are preliminary but they aim to change many of the design principles that originally went into the space. Out went the concrete planters with low shrubs, which had quickly become trash cans and places to urinate behind, and in will go lighter, airier landscaping. If the park includes trees, they’ll be tall trees that provide shade without blocking visibility. Improved lighting will allow for better visibility, and while Roots First can’t remove the dogleg, Haaf says she’s thinking about some sort of art installation that might provide visibility through video screens or mirrors.

Programming is also going to be key. Both Haaf and the downtown partnership believe that permanent programming is a no-go for such a small space and even regular pop-up programming, such as a Friday night concert series, might be too much. It is, after all, just a walkway. But they are encouraging art students to think of the space as a place to rehearse or busk and will likely invite food carts and other retail to the park.

“We realize it’s not going to be Rittenhouse Square,” says Thiel. “It’s not going to be Bryant Park. We understand that. This is to me one of what are going to be many projects in the core of our downtown” focusing on walkability and connectivity. “I think it’s a place where, unlike other pedestrian locations, we can more easily play with lighting, art and vegetation, [which] you can’t do on a busy sidewalk.”

Haaf agrees that people shouldn’t overhype Passageway Park. “There are so many projects that come out with a big bang, ‘Look how cool it is,’ and then it kind of fizzles.” Sort of like the first time the walkway opened. This time — thanks to the downtown partnership and Winston-Salem’s reemerging downtown — things might be different.