What’s Next for Indianapolis’s Transit Future? – Next City

What’s Next for Indianapolis’s Transit Future? 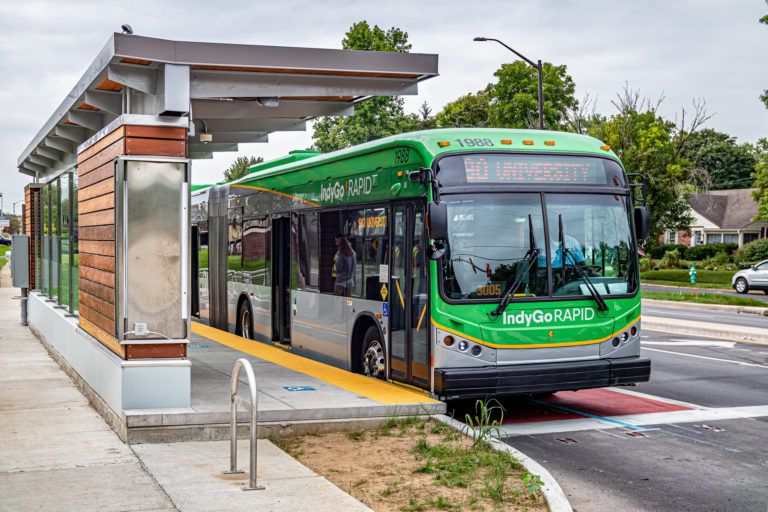 Indianapolis once bustled with streetcars, but last year, the city ranked last out of 100 American cities for public transit use and quality. That’s now changing with the launch of the city’s first bus rapid transit line, established thanks to support from voters, who approved a 0.25 percent income-tax increase to fund improvements to IndyGo, the region’s public transportation system, in 2016.

The following year the city-county council approved it and the transit plan was off the ground. The first of three planned bus rapid transit lines, the 13-mile Red line, opened in September 2019. Despite facing challenges in terms of ridership and service, the city is committed to doing what it takes to get the system off the ground as intended.

The way Indy has gone about funding the project, using both a ballot referendum alongside a tax increase, has been “an extremely popular option over the past few decades,” says Adie Tomer, a fellow at the Metropolitan Policy Program at the Brookings Institute. “Part of the reason is that it’s a simple solution… based on a clear set of evidence that it works with voters to build out resources that places already have and to try to start to provide alternative methods of transportation.”

In order to achieve success with voters like Indianapolis has, Tomer emphasizes the importance of showing voters a system that makes sense to the people who use it every day and to inspire advocates and champions at the onset.

Part of the way Indianapolis achieved this was by wrapping related infrastructure into the plan. From the $155 million allocated to the upcoming Purple line, 50 percent is dedicated to additional infrastructure improvements such as sidewalks, drainage systems, and the like. When Indianapolis’ government merged with Marion County’s in the 1970s, “we didn’t build a lot of pedestrian infrastructure,” explains Mark Fisher, an IndyGo board member. The installation of the Red line, for example, saw the replacement of over 30,000 feet of sidewalks, over 600 ADA-compliant curb ramps, and more in the form of storm sewers and the like. “There’s a large part of our city that has no pedestrian infrastructure,” he says, adding that the transportation project is currently the only plan for making these improvements a reality.

With overarching goals of increasing coverage, frequency, and hours of service while reducing wait times, the plan focused on the installation of three bus rapid transit lines — the Red, Blue, and Purple lines — along high-ridership corridors. (A portion of the Red line was separately funded through a federal grant.) While the Blue and Purple lines are slated to launch in the next five years, the 13-mile Red line was unveiled in September 2019 along with ten weeks of fare-free riding. The entire bus system closed out the year with a 4.9 percent increase in ridership, according to Leslie Gordon, the spokesperson for IndyGo.

The major element of the plan designed to increase ridership is transitioning Indianapolis’s hub-and-spoke bus system to a grid in order to increase coverage, make transfers more efficient, and reduce travel time overall. Gordon expects the transition, which also includes every route running every weekday, to yield a “major increase in frequency,” reducing wait times from 30 minutes to 15 minutes along major corridors.

However, the transition hasn’t been without its challenges. “Obviously, with any new project and innovation, we’re going to see hiccups along the way,” Gordon says. “We’re a small agency and this is a huge project.” IndyGo invested in making the BRT system all electric, but winter presented challenges the supplier wasn’t prepared for. “In the contract we asked for the buses [to be able to drive] 275 miles between charges, but they weren’t meeting that range.” She says they’ve been working with the vendor to find a solution (at the vendor’s cost), but some damage to public perception has been done.

IndyGo has been able to maintain its current service map through charges during scheduled layovers powered by generators on site until the vendor can supply the city with the cord-free buses they need. However, the transition to a grid system and the benefits associated with it have been postponed from earlier this year until June thanks, in part, to it taking more time to hire drivers than anticipated.

“IndyGo has had a challenge in hiring bus drivers,” Fisher says, noting the high demand for commercial licences driven by the trucking industry shortage. While IndyGo’s new drivers went through a month of training, looking back “we probably could have spent more time with bus training. We’re still working out issues of bunching.” The challenge with hiring drivers is one reason that the transition to a grid system has been postponed from Fall 2019 to June 2020.

Despite the system seeing decreasing ridership numbers between November 2019 and January 2020, both Gordon and Fisher remain optimistic. “The Red line had a bumpy rollout,” Fisher says, “but a lot of it [comes from] being on the leading edge.”