Large Cities Are Less Green: True or False? – Next City 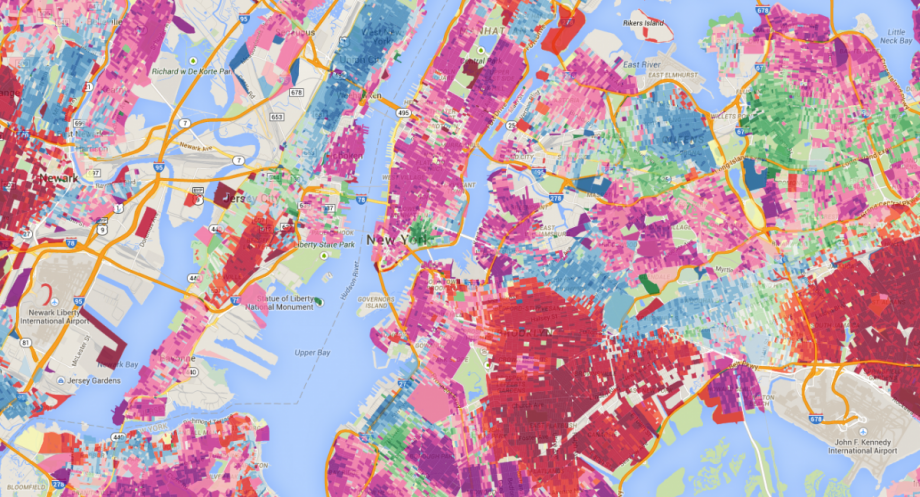 How researchers define cities matters — and they can’t agree on a definition. (Credit: JusticeMap.org)

What, practically speaking, is a city? The answer to that question is crucial for the growing number of researchers who want to examine cities through a scientific lens — yet even leaders in that field can’t agree on a definition.

For a study of, say, economic productivity, does New York consist of the five boroughs governed by Mayor Bill de Blasio? Or does it include municipalities such as New Rochelle and Jersey City that are deeply interconnected with New York proper? Should the population encompass commuters who live in Connecticut? What about someone who visits once a month on business?

“The ideal is that you’d like to measure basically the entire population that interacts strongly, socially and economically,” says Luis Bettencourt, professor of complex systems at the Santa Fe Institute and one of the pioneers of the scientific study of cities. But determining how to arrive at that measurement is another matter. “The problem is that there’s no sharp threshold,” he continues. “That problem has been around for a long, long time.”

In order to try to identify the underlying mechanisms of cities, Bettencourt (a theoretical physicist by training) and other scientists have been plugging numbers into intricate equations. Everyone agrees that the selected boundaries are very important, because small differences in the inputs can lead to widely divergent outcomes. And pretty much everyone agrees that the official administrative unit — such as New York City proper — is too artificial. But beyond that, differences emerge.

Bettencourt and his colleague, Geoffrey West, have relied on Metropolitan Statistical Areas (MSAs), which are entities defined by the U.S. government. They comprise urban cores and adjacent counties with a significant numbers of commuters. “There’s a lot of work by these agencies on the ground, so I wouldn’t dismiss it out of hand,” Bettencourt says. Based on this data source, Bettencourt and West found that U.S. cities followed certain patterns. In some ways, the cities achieved economies of scale as their populations grew — for example, they found that larger cities had fewer gas stations and miles of road per capita than smaller cities. The pair also found that larger population size led to disproportionate gains in income and innovation, though also to higher crime rates.

Other scientists, inspired by this work, have likewise tried to identify patterns related to population size. Several recent studies have sought to evaluate the relationship of size to carbon dioxide emissions. Earlier this year, a group from Brazil published a paper titled “Large Cities Are Less Green.” It disputed the common view that large cities have lower per capita greenhouse gas emissions. On the contrary: CO2 emissions, according to their calculations, increase disproportionately with size, so that larger cities actually have higher per capita emissions. They hypothesized that the greater productivity of cities came at the expense of higher emissions.

The results differed from some previous studies, in part because the authors chose an unorthodox definition of cities. They believed that MSAs, the most commonly used unit, included too many empty or sparsely populated spaces, especially in certain areas, such as Las Vegas and Albuquerque. Counting such spaces, in their view, yields a distorted picture. Instead, the authors created their own algorithm that included only populated sites in the urban boundaries. They claim the resulting units are a more accurate representation of urban space.

“If we define the city in a non-arbitrary way,” says Jose Soares de Andrade, one of the authors, “we will find that the emissions are superlinear. Large cities are emitting much more than we thought.”

A group at University College London also delineated their own boundaries for a new study that looked at the income and patent production of cities in England and Wales. But rather than choose one definition, they crunched the numbers for thousands of different variations. The lead author, Elsa Arcaute, calls this a “Petri dish” approach to defining cities.

A couple of findings emerged from the study. First, no matter what definition the authors used, larger cities did not seem to lead to disproportionately higher incomes. Greater Manchester, for example, which has more than 2.5 million people, “isn’t any richer than a city of 50,000 or 100,000,” says Michael Batty, one of the paper’s coauthors and the author of the 2013 book The New Science of Cities. “They’re all more or less uniform. With the exception of London, which is a gross outlier.”

For patents, meanwhile, the results fluctuated considerably, depending on the chosen boundaries and the corresponding population. It appeared that historical circumstances such as investment in education mattered much more than size. Cambridge, for instance, had many more patents than larger cities.

The discrepancies between their work and that of the Santa Fe group may be due to the UK’s peculiarities. London is a global city in a small country; it’s dominant in a way that no American city is. But it’s also possible that if they applied their methodology to U.S. cities, they would get different results from Bettencourt and West. (The quality of available data is a whole other question.)

What should we take away from the clashing conclusions of various studies? We might be tempted to throw up our hands at the pursuit of universal laws; there’s arguably too much variation due to cultural, historical and political factors, not to mention the difficulty of agreeing on the most basic question of what constitutes a city. Or, maybe it’s just exceedingly hard, but still worthwhile, to try to ferret out underlying patterns from which cities diverge in their own idiosyncratic ways.

In any case, next time you see contradictory headlines from week to week about how cities behave, you’ll have some idea why. The researchers are reaching different conclusions in part because they are starting with different premises.