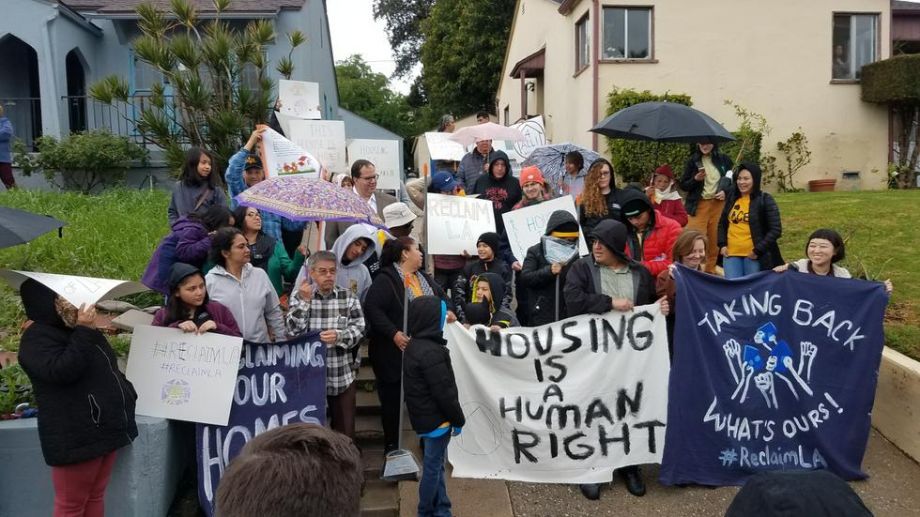 As the sun set, music was playing softly in the background and candles illuminated the faces of a small group of activists commemorating the Indigenous National Day of Mourning.

It was late in the evening of November 26, Thanksgiving Day, and protestors were gathered in East Los Angeles at 2970 Lowell, the only home the activists calling themselves Reclaim and Rebuild Our Community collective had left after a series of evictions.

They were the second group of activists to have moved into vacant homes owned by the state of California since the beginning of the COVID-19 pandemic. These occupations, like others across the country, have forced officials to confront the simmering homelessness crisis head-on. Los Angeles County has found money to fund land trusts’ acquisition of homes across the county, and state legislators are moving to expedite the sale of the state-owned homes.

On March 13, amid stay-at-home orders at the onset of the COVID-19 pandemic, a group of homeless East LA residents moved into a vacant home owned by the state of California. Over the next several weeks, they took twelve more.

While the initial group faced some opposition from neighbors, they were pleasantly surprised at the response that they received from the state. Although police were stationed outside the properties for a week following the occupation, Reclaimers said that they were not harassed.

“They were just there to make sure we didn’t take any more houses,” Sandra Saucedo, one of the first Reclaimers, says.

In late October, the Reclaimers successfully negotiated a transfer of 25 of the vacant properties to the Los Angeles Housing Authority in an emergency lease, which pledged to use the houses for a two-year transitional housing program to provide emergency shelter during the COVID-19 pandemic. Saucedo, along with all but two of the original Reclaimers, legally moved into a home set aside by the City.

While transferring 25 homes to the Housing Authority wasn’t the total victory organizers originally wanted, it was a major success after years of stalemates. Galvanized by the success of the movement, Reclaim and Rebuild Our Community, a second collective of primarily Latinx and Indigenous activists, decided to occupy 20 more homes in November, when another wave of the pandemic devastated Los Angeles.

Vee Serna, a member of the collective, saw the movement as a last resort. After losing her job at a local nonprofit in May, Serna has been unable to make rent. She fears that her landlord will increase pressure on her to leave once the statewide eviction moratorium is lifted in February.

The day before Thanksgiving, Serna and her eight-year-old daughter moved into one of the vacant homes.

Then, around 8:30PM, California Highway Patrol cars started pulling up to a different house. After an hours-long standoff, the Highway Patrol finally pushed through the crowd of protestors to the home behind them. A homeless family, members of the Reclaim and Rebuild Our Community collective, had occupied the home that afternoon.

The police carried out the eviction with precision. One team broke down the doors with a battering ram, while others entered and dragged the family out of the home. Two officers in riot gear dragged a screaming 17-year-old girl over the lawn as a crowd protested.

After seeing a livestream of the police violence, Serna decided to leave with her daughter. The following morning, the California Highway Patrol began making more arrests In total, 63 were arrested, including both Reclaimers and activists.

Since Thanksgiving, an air of heightened anxiety has descended over the neighborhood. “The community has been on high alert,” says Aydin Pasebani, an El Sereno resident and LA County employee.

Pasebani says that residents opposed to the movement have formed neighborhood watch groups in order to prevent future occupations. The highway patrol has become a constant presence, and previously occupied homes have once more been boarded up.

A spokesperson for Reclaim and Rebuild Our Community said that there are approximately 60 officers in the area 24/7. “We’ve calculated,” they said. “Their average annual salary is $97,956… so they’re spending $24,489 to guard one house every month. For that amount, they could pay the rent for at least seven different families.”

Lauren Wonder, Caltrans Chief of Media Relations and Public Affairs, tells Next City in a statement that the homes the Reclaimers occupied were unsafe to inhabit. “As such, Caltrans requested the CHP remove trespassers so that the properties can be re-secured and boarded up,” she said. Wonder added that Caltrans had decided to increase security “for the safety of residents in the El Sereno community”, and stated that the agency was looking into the total costs for the holiday patrols.

The vacant homes in El Sereno were originally purchased by the state to be torn down as part of a planned expansion of the 710 freeway. After being mired in lawsuits for decades, the California Department of Transportation, colloquially called Caltrans, scrapped the project.

While some of the homes were rented out, many were abandoned, and sat vacant for over 20 years. A 2019 investigation by the Pasadena Star revealed that Caltrans owns 163 vacant homes along the corridor alone.

Activists argue that the homes should be used to house the City’s growing homeless population. The Reclaimers collectives have called for the transfer of the vacant properties to the El Sereno Community Land Trust. Since the formation of the trust in 2017, the organization has been vying to get Caltrans to sell them the freeway properties.

Over the last few months, things have started to fall into place. After the Thanksgiving week arrests, videos of police violence quickly circulated on social media and the evictions made national headlines. The Los Angeles Times even printed an editorial in support of both sets of Reclaimers.

City Council member Kevin de León, who represents El Sereno, condemned the violence that protestors faced, stating that images from the protests were “heartbreaking and unacceptable”. De León introduced a motion directing the City to lease and eventually acquire the properties from Caltrans, and issued a statement that his office was working to get housing vouchers for all those evicted that night. Reclaimers say that after weeks of waiting, De León’s office finally conceded that there were no vouchers on December 16.

State senator Maria Durazo and assemblymember Wendy Carillo issued a joint statement calling the collective “trespassers.” The statement did, however, also call for “immediate action to house people.” In December, Durazo introduced a bill to expedite the sale of the Caltrans properties, including ones that are currently occupied by legal tenants.

Affordable housing advocates are less than pleased with the Senator’s efforts. Sua Hernandez, a member of the El Sereno Community Land Trust, worries that the bill would result in the displacement of long-time middle-income tenants who may be unable to afford the new market-rate rents, as only low-income tenants would be eligible for affordable sale prices.

“The way the bill is written, it could exclude a lot of families,” she said. “Everybody that lives in one of these houses should have a pathway to ownership, even if they’re not what we deem poor.” Hernandez also pointed out that the bill would not require Caltrans to comply until mid-2022.

The County of Los Angeles has been more supportive. In mid-November, the County approved a pilot community land trust partnership program that would allow five partnered trusts, including the El Sereno Community Land Trust, to purchase foreclosed properties at below-market rates.

On January 5, the County passed a motion identifying a pool of $14 million for partnered trusts to use to acquire additional properties at market rates. The trusts hope to purchase at least five properties by July.

Increased public pressure has also pushed Caltrans to act. On December 30, the agency issued a request for organizations to submit ideas to develop 47 residential plots demarcated as uninhabitable. The decision to focus on these properties was due to “demand from the community to put these dilapidated homes and vacant lots to good use”, said Lauren Wonder, Chief of Media Relations and Public Affairs.

Members of the El Sereno Community Land Trust are hopeful that they will have a say in how the land is used, and plan to submit a proposal to the State. Sua Hernandez credits the occupations for their successes.

“All of this is a result of the Reclaimers,” Hernandez says. “I don’t know that we’d be in the position that we are had it not been for Reclaiming Our Homes.