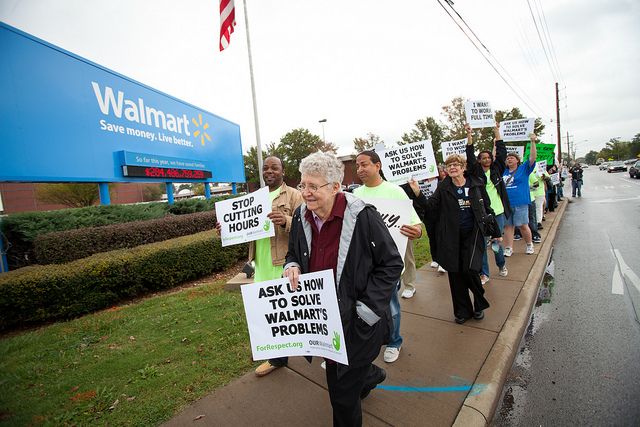 Protestors outside a Walmart in Arkansas. Credit OURWalmart

I wrote last month about Washington, D.C.’s living wage bill, which would require non-union big-box stores like Walmart and Target to pay their employees a living wage of no less than $12.50 an hour ($4.25 more than the city’s minimum wage). The regulations in the proposed bill would only apply to stores in spaces larger than 75,000 square feet.

I thought this bill might usher in changes to these big corporation’s business models in our nation’s capital. Perhaps they would embrace smaller, urban storefronts more targeted to what local residents need, rather than massive stores stuffed with everything from beach balls to vats of Vaseline.

Turns out I was dead wrong. In a Washington Post op-ed that published an hour ago, a Walmart spokesperson writes that the company will nix plans for three of six D.C. stores should Mayor Vincent Gray sign the bill. What’s more, the bill’s passage would “jeopardize” the other three, which are already under construction.

I guess at least one big-box titan doesn’t want its employees to earn a respectable wage and would rather keep its overhead smaller. At least Walmart is true to half its slogan: Save Money. Live Better.