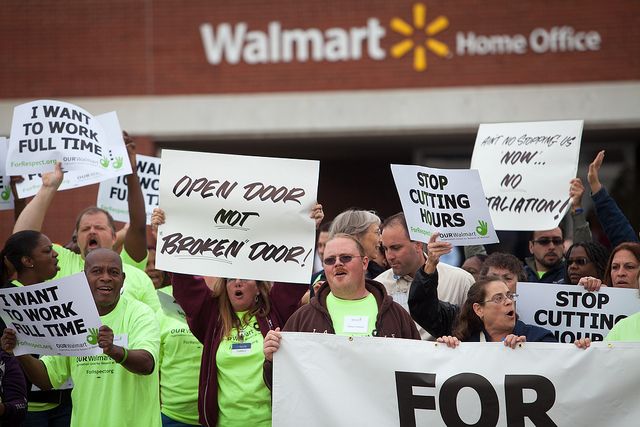 Walmart employees in Southern California walked off the job yesterday morning to strike against insufficient wages, scheduling and a host of other concerns. It was the first multi-store strike since 20 Walmart employees were fired for joining a June walkout. More workers plan to strike today in Los Angeles, according to Salon.

The retail giant has had a few brushes with organized strikes and employee turmoil in the last year, since a reported 400 workers walked off the job on Black Friday. A bill in Washington, D.C., to raise the minimum wage for big box stores failed (after Walmart killed plans for three new stores in the District). Nine fired Walmart employees were arrested along with one who still worked there during an August rally in D.C.

This comes in the wake of fast food workers striking for a higher minimum wage and the right to unionize. Fast food is a $200 billion industry, and workers are asking for modest wage hikes.

Walmart President and CEO Bill Simon dug himself into a bigger hole when he presented a slide show at a conference in September that said over 475,000 of its workers (Walmart calls them “associates”) made at least $25,000 last year. The problem is that Walmart employs roughly one million hourly workers. So that leaves over 500,000 who are under the $25,000 watermark.

And this is why workers are striking: They’re not getting enough hours and the federally mandated minimum wage of $7.25 isn’t cutting it. It worked in Hialeah, Fla., last month where, according to Salon, over 80 striking employees were able to get 40-hour workweeks and 50 cent raises. So these walkouts aren’t just for dramatic effect. They’ve had some results.

OUR Walmart, the group behind the California, Florida and Black Friday strikes, did not respond to requests for comment. (Neither did the United Food & Commercial Workers union, a group they have “close ties” with.) OUR Walmart is planning another strike for Black Friday this year, when consumers flock to stores the day after Thanksgiving for deals.

This is just further proof that the quickest way to boost the income levels of minimum wage workers is for cities and metropolitan authorities to implement their own minimum wage. It doesn’t have to be as drastic as the $15 an hour wage in SeaTac, Wash. (though that would be nice). Employers, both big and small, aren’t going to pay their minimum wage workers more than they have to. It’s up to cities to buoy low-income workers by raising their wages.

A Walmart spokesperson got back to us and characterized these walkouts as isolated incidents with very small contingents of Walmart workers, saying, “There were about 15 associates from L.A. County that participated yesterday. For a little perspective, we’ve got 13,000 associates in L.A. County. That gives you an idea of the scale there. Basically, we don’t see a lot of associates participating. And it’s really because they understand what it’s like to work for Walmart. They understand the opportunities the company provides.”