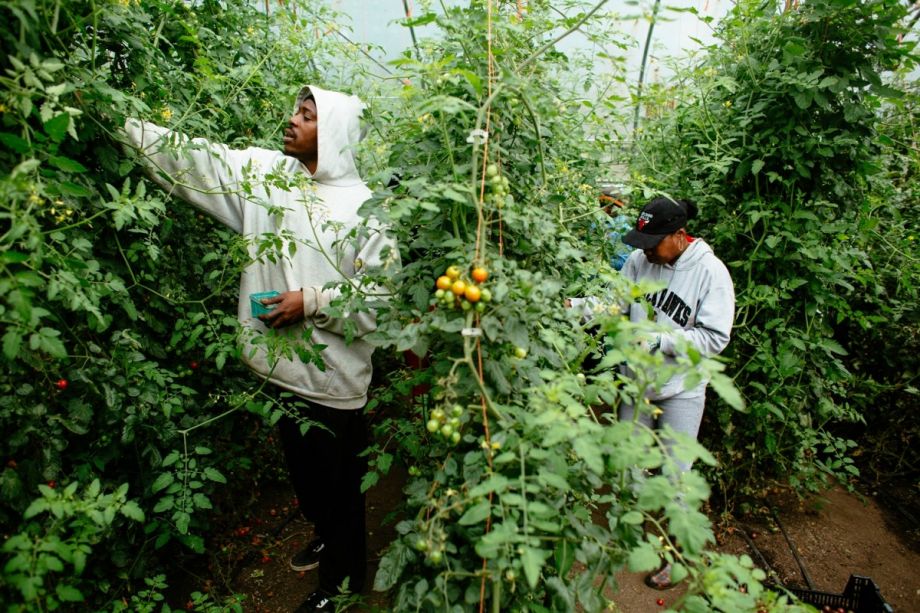 Fred Daniels (left), director of urban farms at Growing Home and a Growing Home Production Assistant at work. (Photo by Andrew Collings, courtesy of the photographer and Growing Home)

Fred Daniels grew up down the street from the Growing Home produce farm, in the Englewood neighborhood on the South Side of Chicago. His grandmother was from the South and always had a backyard garden, which Daniels would help her tend. Back in 2010, Daniels saw a notice for a job opening at the produce farm. Today he’s Growing Home’s Director of Urban Farms.

“I didn’t actually expect to be doing agriculture on the scale that we do,” says Daniels, who oversees all of the farm training for production assistants in the field, crop planting, crop rotation, and the overall function of the farm. “We grow 30,000-35,000 pounds of food every year,” says Daniels. Growing Home claims to be first and only certified organic “high-production” urban farming operation inside the city of Chicago.

Education and job training have been an integral part of Growing Home since it was established in 2002. The training program includes three cohorts of production assistants annually, with as many as 55 trainees ranging in age from 18 to over 60. Each cohort completes a 14-week training program where participants learn the nuts and bolts of urban agriculture. They also receive instruction in assembling résumés and cover letters, along with so-called soft skills such as communication and professionalism. Last year, according to Growing Home, the placement rate for program alumni was about 95 percent, with most landing jobs in the food service industry. Many participants in Growing Home’s production assistant cohorts have limited work histories.

“We really don’t discriminate against backgrounds, including people that have been incarcerated. We give people … a second chance who have been out of work for a few years to get back into the workforce,” says Daniels.

HB3418 originally passed with overwhelming bipartisan and bicameral support. Outgoing Republican Governor Bruce Rauner stripped the bill of much of its financial support through an amendatory veto, but both houses of the Illinois Assembly voted to override Rauner’s veto at the end of November, allowing the original bill to become law.

“We were one of the many partners that were a part of [the override effort] along with Rep. Sonya Harper and Senator Maggie Hunter,” says Nick Lucas, programs manager for Advocates for Urban Agriculture.

The bill is modeled after the support that is already extended to rural farmers, Lucas explains. “For the next steps, we’re looking at implementation and we’ll see where things go,” Lucas says.

Chicago has previously adopted several modifications to its zoning ordinance to accommodate urban farming and community gardening. The City of Chicago also provides guidance for gardeners and farmers. Advocates expect the new statewide legislation to aid in establishing new urban farms as well as enhancing established programs such as Growing Home.

Governor-Elect J.B. Pritzker and Lieutenant Governor-Elect Juliana Stratton are also providing space for urban agriculture leaders to play a role in their administration. As part of the transition, they’ve assembled an Agricultural Advisory Committee to advise on agricultural policy throughout the state. The committee features a strong urban agricultural contingent, including Rep. Harper and Anton Seals, who co-founded Grow Greater Englewood along with the state representative in 2014. Other members include Erika Allen, co-founder of Urban Growers Collective. The committee held its first meeting in early December 2018.

Seals views his role on the committee as ensuring a seat at the table for black and brown urban farmers. He hopes to have a similar presence as he did in the development of the Green Healthy Neighborhood Plan that was approved by the City of Chicago Plan Commission back in 2014.

“We wanted to make sure there was a space for black people in particular in this neighborhood, when there was the Green Healthy Neighborhood Plan that came out of the city,” Seals says. The idea with that plan, he explains, was to use a lot of the vacant lots to spur an agricultural district on the South Side.

Urban farmers, especially those of color, face unique challenges, including zoning restrictions, lack of access to capital and environmental contamination that goes down to the soil, not to mention a perception that African Americans are removed from agriculture and farming — a perception Seals views as erroneous.

“It is really important for us to kind of uplift and highlight that it wasn’t just our labor that [slave-owners] extracted, it was our knowledge of caring for the land — that’s part of our work,” says Seals, whose title is “Lead Steward,” rather than executive director.

“This notion of stewardship is … stewarding the land in relationship to the land, and not over the land as owners, which is a Western concept,” Seals explains. “As African people across the Diaspora, it’s what we’ve been doing since we’ve been on the planet.”

Seals estimates that establishing each urban farm requires between $30,000 and $35,000, which is a relatively small investment, but still challenging for urban farmers who have to deal with historically restricted access to capital and an extremely slender profit margin. Soil remediation presents another significant financial challenge. Grow Greater Englewood is investigating less expensive options, including composting and growing cover crops, to help clean the soil. Addressing these and similar issues motivated Seals and State Rep. Harper to establish Grow Greater Englewood.

“Our role [at Advocates for Urban Agricutlure] is to … facilitate information and resource sharing so that people don’t have to be experts in all things,” Lucas explains. “For example, if you’re trying to start a farm business, an urban farm, you might know everything about growing food but you don’t have a background in zoning or business licensure or who to talk to, to get your fire hydrant turned on, all those things. Ultimately, it’s not rocket science but it takes a lot of time to figure those things out.”

The Chicago Urban Agriculture Mapping Project (CUAMP) is another key project of Advocates for Urban Agriculture. Launched in 2015, in cooperation with DePaul University, NeighborSpace and the Chicago Food Policy Action Council, the mapping project is a continually-updated interactive map of more than 850 community gardens, school gardens and commercial urban farms across the entire Chicago region.

Green City Market, which will begin its 20th year in 2019, was inspired by the European emphasis on locally-grown and cultivated foods. Green City Market presently works with more than 55 urban and family farms located in Illinois, Indiana, Wisconsin and Michigan, all of which are certified through a third party such as USDA Organic or Certified Naturally Grown. Superstar chef Rick Bayless was a founding member of Green City Market, and purchases much of his food from the organization, according to Executive Director Melissa Flynn.

“One of the main goals of our market is to help our sustainable farmers earn a living for generations to come so that Chicago’s food system is better for it and more resilient and we’re not dependent on procuring our food from outside sources,” Flynn says. “Right now less than five percent of the food in Illinois actually comes from Illinois. And the position we’re in here in Chicago we’re surrounded by great, great farmland in Illinois, Michigan, Indiana, Wisconsin.”

Green City Market also conducts hands-on educational programs with Chicago Public School students, based on the Edible Gardens program launched by Alice Waters. “They’re really learning soup-to-nuts so to speak, how to create meals and how to nourish themselves. Lots of vegetables, learning that root vegetables are not scary, that they break down, and about butternut squash … it is very much hands on,” Flynn says.

Urban agriculture programs have received a lot of press in recent years, which may lead some people to believe, erroneously, that the challenge of healthy food systems has been solved, according to Flynn.

“A lot of people think that with all the farm-to-table restaurants we have, all the press, the sort of use of local all over the place that we’ve already established this wonderful food system and that the work is done,” she says. “We are definitely not there. We are at maybe the first or second rung of a really tall ladder to improving our food system.”