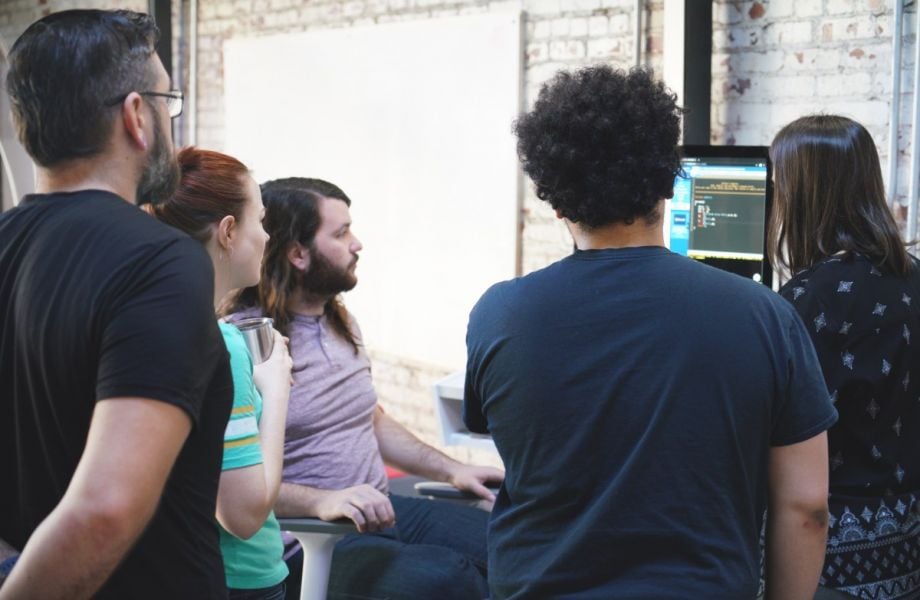 Staci Aaenson-Fletcher, a Tulsan previously working as an accountant, recently took a career turn. “I was working in an accounting job with a large corporation — great benefits and culture,” she says, but there was a catch. “With the work experience I had, I was pretty capped in my salary. I was going to have to be a traveling regional manager,” Aaenson-Fletcher says, if she wanted to earn more. “But I want to stay local and be with my family.”

Instead, in January of this year, Aaenson-Fletcher joined the first cohort of students from the newly opened Tulsa campus of the Holberton School, a San Francisco-based software engineering academy. The Tulsa campus is one part of the Tulsa Innovation Labs, an initiative that has set out to make Tulsa not only the nation’s newest tech hub, but its most inclusive as well.

The lab is an initiative of the Tulsa-based George Kaiser Family Foundation, which seeks to end intergenerational poverty in its city. By working with McKinsey & Company to analyze the areas of opportunity in the city, the initiative identified five focus areas that will anchor its efforts: virtual health, energy technology, and drones, as well as cybersecurity and data analytics.

“We landed on these five in particular because they scored highly in terms of impact, feasibility, and inclusivity. Together they represent an interconnected set of opportunities to transform Tulsa into a tech hub,” says Nicholas Lalla, the co-founder and managing director of Tulsa Innovation Labs.

The George Kaiser Family Foundation is investing $50 million in Tulsa Innovation Labs to create local growth in these specific areas and take a diversity-focused approach along the way.

One way the lab has set out to spark this growth is through its partnership with Holberton. Once the school reaches its intended scale, the plan is for a diverse crop of 500 software students to graduate from it each year. Aaenson-Fletcher’s inaugural cohort is a group of 25 people between the ages of 19 and 55, with backgrounds ranging from welders and customer representatives to rock climbers and musicians. Half of the group are women or people of color.

“Having diverse backgrounds and experiences in the workplace makes for better business decisions, more responsive products, and a more inclusive ecosystem,” Libby Wuller, executive director of Holberton School in Tulsa, said in a press release.

To help foster that diverse workforce, Holberton offers a living assistance program so students can afford to go to school full time and also pay their bills. Holberton also offers a deferred tuition model, meaning that graduates don’t have to pay for the program until they graduate and earn at least $40,000, at which point they’ll start making monthly payments to the school. The intention of these programs is “to create pathways to the software engineering profession regardless of an individual’s circumstances,” Wuller added.

The George Kaiser Family Foundation is currently offering assistance with tuition repayment, as well. “If I get a job after graduation, GKFF will pay a portion of that monthly payment as long as I stay in Tulsa,” says Aaenson-Fletcher.

In terms of inclusivity, “it’s obviously the right thing to do and it’s mission-aligned to GKFF,” says Lalla. “Especially during the centennial of the Tulsa Race Massacre, we recognize that not all Tulsa neighborhoods have had access to the same opportunities. We’ve built inclusivity in through research and analytics. We prioritized looking at what share of jobs are accessible with associate degrees or certifications and built that in to land on our top five [focus areas.]”

Clay Holk, the senior policy advisor for small business, entrepreneurship and economic innovation for the City of Tulsa, sees Tulsa Innovation Labs as being a big piece of the economic diversification puzzle the city is trying to piece together.

“We’ve had an interesting experience here, not just with COVID but longer-term declines in energy prices given how much of our local economy is tied to the oil and gas industry,” he says. “Tulsa has been through a lot of booms and busts. When we’re building out these [tech] ecosystems, the idea is that some things are booming while others are busting, but altogether we’re continually rising.”

Holk is already impressed with Tulsa Innovation Labs simply for their sharing of the results of the McKinsey analysis — a source of subject matter information that is “hard to replicate [in] the public sector” — but he realizes that the city has to be accountable to all of its nearly 400,000 residents.

“Something we have to think about a lot actually [are] the distributional consequences of taking part in something like this,” he says. “We have to be thinking about the second and third order effects… You can look at housing prices in [larger] cities and see those second and third order effects,” while adding that those problems are a long way off for Tulsa at the moment.

Right now, he sees opportunities for the city’s low cost of living as a draw for the remote workforce that has grown in the wake of COVID-19. “People can be wherever they want to be and that’s a very interesting opportunity for us.”