Communities Must Be Empowered to Hold Police Accountable – Next City

Communities Must Be Empowered to Hold Police Accountable 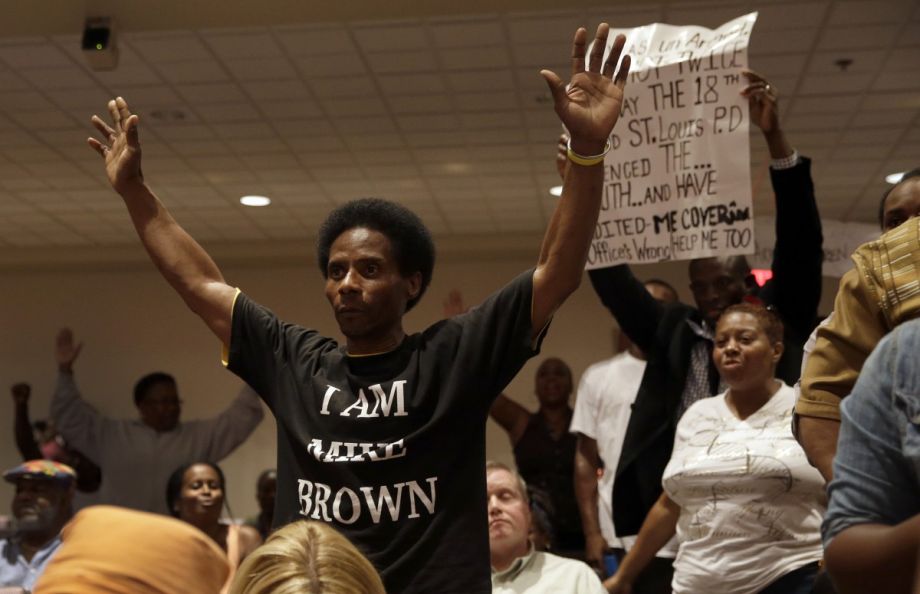 Larry Miller holds up his hands after speaking during a meeting of the Ferguson City Council on Sept. 9th. (AP Photo/Jeff Roberson)

I’ve been back from Ferguson for almost two weeks. I’ve been trying to put into words what I experienced even with the privilege of having escaped the kind of trauma, violence and terror inflicted on black people by the state. No matter the efforts made to change policy, a culture change is needed — a change in culture that increases community empowerment, especially in times of black protest. Americans are more likely to be killed by the police than by “terrorists,” and every 28 hours a black person is killed by the police, a security guard or a self-appointed vigilante.

The use of police dogs, water hoses and police brutality against the black community predates Ferguson, but 50 years after the Civil Rights Era, we’re still asking the same fundamental question around police-community relations: How can we trust you after this? Or more broadly, how can we put trust in the institutions said to protect and serve? As brother Philip Agnew so eloquently stated: We are the step-children in war with a country that never never loved us.

Even with peaceful, strategic protests, such as those led by Ferguson’s young black people, the residents of Ferguson were tear-gassed, shoved, arrested, maced and threatened by the police. Some had loaded guns pointed at their faces.

Policy has a part to play in holding police officers accountable for their actions. But will policy enable trust in the institution again? In an August poll, 70 percent of black people said police departments around the country do a poor job in holding officers accountable for misconduct, while 57 percent of black people said they think police departments do a poor job of using the right amount of force. Ferguson’s recent changes to policing ignore the horrible violence and trauma faced by community protestors: Churches were raided and random neighborhoods were tear-gassed.

How can we support citizens’ ability to hold their police departments accountable without more policing but with community empowerment? How do we provide healing for those who have been victims of state-sanctioned violence because they peacefully demonstrated their right to assemble? There needs to be a fundamental shift in relational dynamics between police and community. Connect with organizations and networks that have the tools, resources and platforms to protect and empower yourselves and also promote healing.

Dante Barry is the deputy director of Million Hoodies Movement for Justice and a national organizer in the racial justice and gun violence movements.