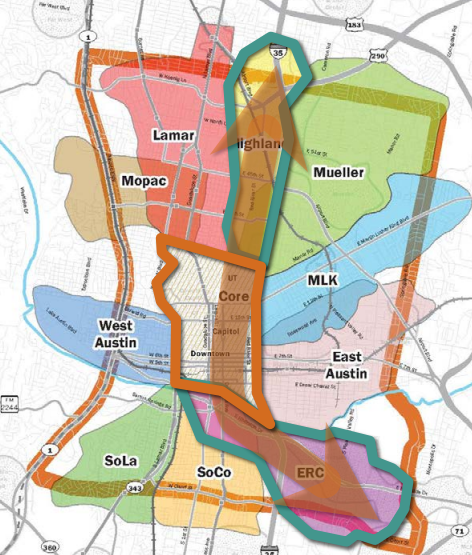 Transit consultants in Austin on Friday presented their recommendation for which corridors should be slated for the Texas capital’s first new light rail line. The project has a torturous history so far, and this latest announcement provoked no less.

The team charged with choosing an initial path for Project Connect, as the proposed line is known, picked two somewhat unexpected routes: the Highland sub-corridor, directly north of downtown Austin, and East Riverside, to the southeast. These two corridors, which would join together through the core of the city, beat out two others that had gained the most attention: Mueller, to the northeast, and Guadalupe-Lamar, which extends to in the north-northwest direction. (See the map above for context.)

The city had for years been pushing light rail out to the old Mueller Municipal Airport, now in the process of being redeveloped into a New Urbanist-style suburban neighborhood. As the planned community’s developer said during the public feedback portion of Friday’s announcement, Mueller was zoned with rail in mind — rail that never got built.

Meanwhile, proponents of an alternative alignment, centered around Guadalupe Street in downtown Austin and North Lamar Boulevard beyond the University of Texas main campus, argued that this route — which already hosts the city’s busiest bus line — was the most likely to draw in riders and spur development. The Guadalupe-Lamar alignment was subject to a failed referendum in 2000, with the city pivoting toward a Mueller option a few years later.

“The city spent a lot of time with a fairly singular purpose looking at an alignment out there [to Mueller],” Project Connect team leader Kyle Keahey said in a phone interview a few weeks ago. “What we saw at that time was people saying, ‘Why are you going to Mueller and not somewhere else?’ So we’ve taken a step back and said we need to show our work, we need to fully evaluate the various points of the compass and where you could make that investment.”

As it turns out, the team ended up choosing an alignment almost identical to one proposed back in 2010, before the public engagement process began.

In fact, as the decision to go with Highland over Mueller was unveiled, some wondered openly on Twitter whether Highland isn’t just a backdoor attempt at the original Mueller corridor all along. Keahey mentioned during the presentation that there may be some overlap between the two corridors, leaving open the possibility of a Highland corridor alignment that terminates very close to the old Mueller airport.

Complicating matters is federally funded enhanced bus service coming to the Guadalupe-Lamar corridor. According to Project Connect’s criteria, this was a mark against that route, and any others that already have or are slated to get rapid transit service. Supporters, though, point out that it isn’t even close to true “bus rapid transit” — there would only be one short segment with dedicated lanes — and that the tens of millions of dollars allotted for “MetroRapid” bus service pale in comparison to an urban rail investment that would total hundreds of millions.

The Guadalupe-Lamar corridor was, Project Connect conceded, by far the most popular option at the three public information sessions held throughout the city. Still, the team contended that based on the crowds’ preferences for priorities — congestion and development potential, for example — the Highland and East Riverside routes were actually better fits.

This disconnect mirrored a similar split between University of Texas administrators and students. The administration has come out in favor of an alignment that would pass the east side of the campus (both the Mueller and Highland corridors would likely meet this criterion), while the student government passed a resolution supporting the Guadalupe-Lamar alignment, as it would stop closest to the West Campus neighborhood where many UT students live.

“There’s lot of anger in the community at this process,” Lyndon Henry, a longtime transportation official who helped create Austin’s Capital Metro transit authority decades ago, said after the presentation. “Project Connect has been working in a kind of bell jar…The public involvement is really kind of a joke, in a way. Clicking on limited choices that are defined by a small group of people is not a democratic process.”

“It doesn’t really surprise me,” Jace Deloney, chairperson of Capital Metro’s rider advisory committee and Austin’s urban transportation commissioner, told Next City. “I think some of the assumptions going into these evaluation criteria” — there were dozens of variables and indices that some felt were arbitrary, leading to speculation that the data-centric approach was gamed — “are giving projected growth and highway data a little more sway than they should.”

Mike Dahmus, the first to speak after the official presentation, offered a more scathing critique of the process. “Successful cities with a first investment in urban rail generally do one thing,” he said. “They look for a dense residential corridor and they try to connect it to a dense employment center. The way you find that corridor is generally looking for the place where the most people ride the bus. There is one corridor like that in Austin, and we call it number ‘1’ for a reason.” He meant the No. 1 and 101 bus routes along Guadalupe and North Lamar.

Dahmus went on to mention an error that Project Connect made early on in the process, showing a bus map that revealed Mueller, not Guadalupe-Lamar, to have the heaviest bus ridership. The error was corrected and often acknowledged by Keahey’s team as an example of public outreach done right. But the mistake stung some critics of the process, who saw it as evidence that the result had been preordained.

“There have been 20 to 30 additional [data] errors pointed out by my friend Scott Morris at the Central Austin Community Development Corporation which have never been addressed, never responded to, and are still issues,” Dahmus said.

Wrapping up the meeting, one official invited members of the public to send supposed data errors to him for analysis — to which the Mayor Lee Leffingwell responded, to audience laughter, “You may have bitten off more than you can chew.” (When Capital Metro’s community involvement manager asked on Twitter for “specific disagreements you have with data/methodology that impacted sub-corridor evaluation,” one urbanist blogger responded with a list of ten.)

Ultimately, whatever alignment Project Connect chooses will likely go before voters in November 2014, when they will either approve or reject the light rail line. (There’s still the possibility that enhanced bus service or a streetcar will be chosen instead, but this seems notional at best.)

“What you have is some of the most strongly pro-rail people in the city that are going to be resisting this,” Henry warned. “The people that should be supporting you are going to be hostile. Why are you doing this? Why are you going in this direction? I would urge you to reconsider this — Guadalupe-Lamar is the corridor where this should go.”

The City of Austin Transportation Department did not respond to a request for comment after Friday’s announcement.