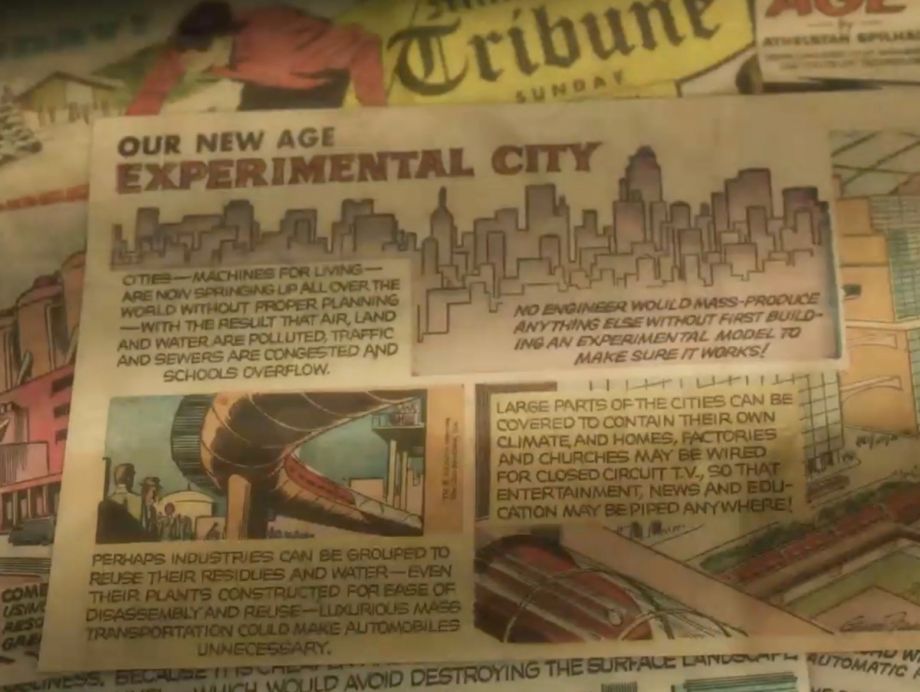 (From “The Experimental City,” by director Chad Freidrichs)

The “city of the future” could have been in Minnesota. In the late 1960s, urban planner, engineer and master showman Athelstan Spilhaus proposed a modern domed utopia. Rather than struggling in vain with seemingly intractable problems like pollution, traffic, aging infrastructure and poor schools, Spilhaus, along with newspaper publisher Otto Silha, wanted to start fresh. Their Minnesota Experimental City (or “MXC”) would be built from the ground up, for 250,000 residents, on a virgin site in the wilds of the state, far from any existing city.

Spilhaus’ drawing board was dotted with clever engineering, advanced materials and space-age technologies. A team of experts was assembled to develop prototypes for many of the ideas still being pioneered even today: self-driving cars, co-generation energy plants, mixed-use downtown districts and even a proto-internet.

In a new documentary, “The Experimental City,” director Chad Freidrichs mines old documentary footage, newspapers and audiotapes to carefully excavate this largely forgotten episode in the history of “urban futurism,” and an approach to city planning that may be even more relevant today than it was in the 1960s.

Along with starting from scratch, Spilhaus’ vision placed a premium on the benefits of perpetual experimentation. The thinking: In existing cities, experimentation is too costly and dangerous, leading to the persistence of the suboptimal status quo. But a city designed around experimentation would be forever improving, spinning off new solutions for the benefit of all in the process.

In addition to technology and vision, Spilhaus and Silha brought together the tools of the communicator and showman. Before work could begin, they had to sell the concept to legislators, investors and, ultimately, a skeptical public. A happy by-product of all this promotion is that the MXC was extremely well-documented, and the film makes excellent use of these archival sources.

Freidrichs has assembled a comprehensive collection of “tomorrow land” visuals and presents them in a visually luxurious symphony of future urbanism: 1960s colors and Jetsonian optimism combine to maximum effect, the visual equivalent of an Esquivel record re-mixed by Steven Soderbergh. The colors, typefaces, film stock, effects and even the static buzz-and-pop of pre-digital hi-fi are all perfectly matched. There are occasional winks to humorous irony, such as when the narrator promises pollution-free transport (cue video of Dad lighting a cigar in the family bubble-car), but the overall effect is an excellent reminder of a time when the future seemed possible and tomorrow was only a day away.

Freidrichs recognizes and highlights the key moments of dramatic tension that drive the story forward, leading (predictably) to a series of problems and setbacks. The film finds its dramatic pivot in 1968, when Minnesota favorite-son Hubert Humphrey loses the presidency to Richard Nixon. After this point the drawing board becomes stained and real-world politics seep in. Funding becomes scarce, local protest complicates siting, and (paradoxically) the emerging environmental movement threatens to delay the project indefinitely through regulation.

More distressingly, the work of the team devolves into infighting. Ultimately, the experts admit failure, which they attribute to their “inability to get other people to see things as clearly as we see them.” Unsaid, but lingering in the stale, testosterone-filled air of the room, is the extent to which these “expert communicators” could have learned to listen just a bit more.

To his credit, Freidrichs keeps the story firmly in the past. Whereas many historical documentaries pathetically clamor to be “relevant today,” “The Experimental City” leaves consideration of “implications for the present” and “lessons learned” for the audience (and the reviewer). That said, this story is, of course, quite relevant today, as urban planners, and quite a few multinational corporations, are dusting off the old tropes of futurism.

Fueled by big data analytics, pervasive mobile technology and smart infrastructure, the present once again promises to be the time for the city of the future. Google’s Alphabet recently announced ambitious plans to rebuild Toronto’s waterfront as an experimental laboratory for smart city technology, while halfway around the globe the technological Utopia of Masdar City is rising from the Abu Dhabi dessert. Not to be outdone, just last month Bill Gates announced plans to purchase 25,000 acres to become the new smart city of Belmont, Arizona. But beyond sexy high-tech sizzle, will these projects be able to address the more systemic problems that plague our cities past and present, such as inequality, poverty, racism, pollution, corruption, consumerism, violence, disinvestment and apathy?

Ultimately, whether — and how — we can realize the untapped potential of science and technology will depend on the extent to which we can recognize and address the inherent tensions and trade-offs of top-down technocratic city planning. Remembering “The Experimental City” might be a good place to start.

Ezra Haber Glenn is an urban planner and lecturer at MIT's Department of Urban Studies and Planning, where he teaches on community development, the use of data in public policy and a special course in “The City in Film.”